The Brief – A divided isle 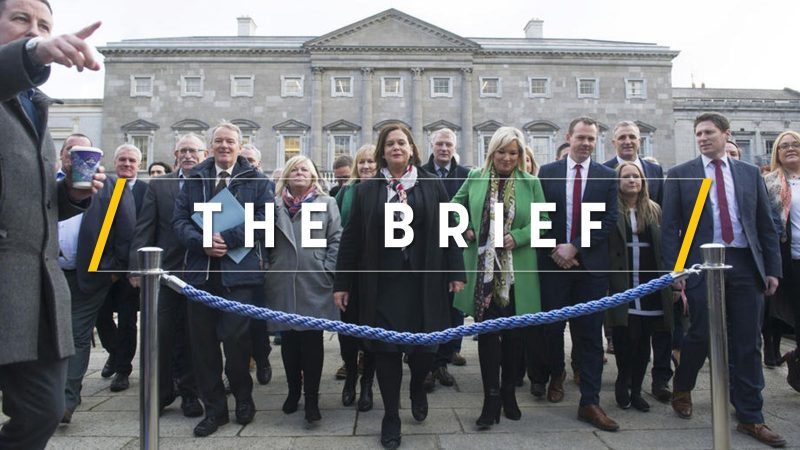 There’s never a good time to have a political crisis but the one when your country is about to work out a complex new border arrangement with its closest neighbour must be among the worst.

After last week’s elections produced a three-way dead heat, Ireland faces a period of Belgian-style paralysis that it can ill-afford.

On Thursday (13 February) Fianna Fáil joined Fine Gael in ruling out the prospect of talks with Sinn Féin about forming a new Irish government.

The arithmetic for forming a government now looks very tight. Even if Fianna Fáil and Fine Gael, which have divided power between them since the civil war, go into coalition, together they would still be five seats short of the 80 needed for a majority.

There’s no political reason why smaller parties should prop them up: the Greens and Labour have tended to be badly punished by voters after serving as a junior coalition partner to one of the major parties. Nor does there seem to be much prospect that Sinn Fein can cobble together enough support to govern as a minority administration.

The fault lines of Irish politics appear to have moved decisively. Sinn Féin topped the poll because of its leftist pitch on housing, health and pensions, breaking the decades-old cartel between two parties that are divided by civil war politics but are both on the centre-right.

While the Republic’s economy is one of Europe’s strongest performers, Ireland can’t stagger à la Belgium with an interim government and without political leadership.

The new, as yet unspecified, border arrangements agreed on by Leo Varadkar and Boris Johnson last autumn to finally get the Withdrawal Agreement over the line will be one of the key tasks of 2020.

The Joint Committee on North-South arrangements needs to be formed and make their recommendations, which then need to be implemented. With the devolved government in Northern Ireland back in office for only a month after three years of statis, that was going to be difficult anyway.

One of the subplots of Johnson’s landslide win in December was that in Northern Ireland, pro-Unionist parties – for the first time – no longer hold a majority of the 18 Westminster seats, even though Sinn Fein’s vote share in Northern Ireland actually fell.

Sinn Fein’s breakthrough last week may have been based in large part on classic left/right ideology, but it indisputably also stands for the creation of a united Ireland. And whichever side of the border one stands one, that looks more likely than ever before.

EU wants to create a genuine single market for data that corresponds to its economic power, prioritising nine “strategic sectors” and dedicating up to €6 billion to investment in data centres, according to the Commission’s data strategy draft seen by EURACTIV.

Germany’s defence minister Annegret Kramp-Karrenbauer said on Thursday she is willing to open the current Franco-German arms projects to other European partners.

European Commission President Ursula von der Leyen denied personal liability but admitted mistakes had been made as she faced questions from lawmakers in the Bundestag on Thursday in the so-called “advisor affair”.

The EU Ombudsman’s office announced it has opened an inquiry into the European Commission’s catalogue of priority energy projects, after green activists lodged a complaint about the inclusion of new gas infrastructure on the list.

The deputy director-general at European Commission’s DG AGRI views new breeding techniques as a way to manage pests in agriculture, according to a leaked document seen by EURACTIV, which is part of internal consultations on the draft biodiversity strategy.

More than 20 of Europe’s airports could be underwater by the end of the century if current climate trends continue. The prospect of economic and security chaos is starting to drive home the message that the cost of doing nothing will outweigh the price of climate action.