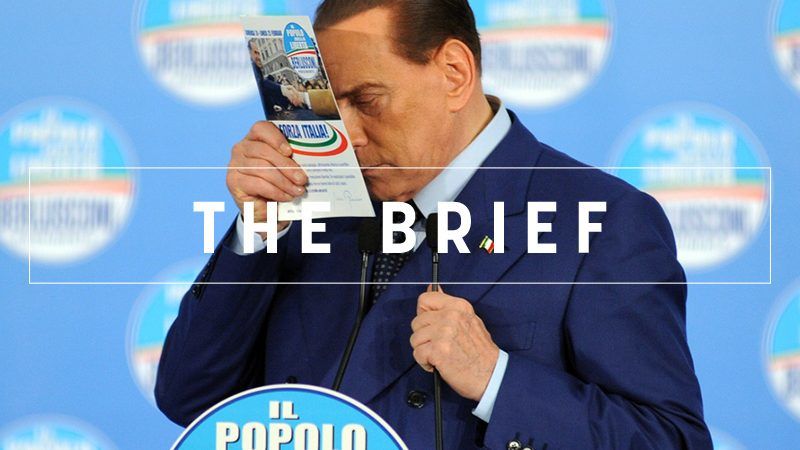 Silvio Berlusconi, like any half-decent B-movie villain or that spider that lives in your kitchen, refuses to stay (politically) dead. He has, inexplicably to non-Italians, clawed his way back into political relevance and his latest masterplan is just starting to become clear.

One peculiarity of Italian politics is that opinion polling is forbidden within the two weeks before D-Day on 4 March. That means we’re pretty much in no man’s land when it comes to predicting an outcome.

Under new rules, a party or coalition has to secure 40% of the vote to form a stable government. That leaves several options on the table, ranging from ex-PM Matteo Renzi teaming up with the More Europe party to even offering the populist Five Star Movement an, unlikely, share of power.

But Renzi’s Democratic Party was on a worrying slide before the moratorium on polling came into force, so Berlusconi’s resurrected Forza Italia party might be in pole position to seize power through an alliance with two far-right movements.

It’s become increasingly clear over the last month that if Forza Italia gets the most votes in their coalition, he’ll appoint current European Parliament President Antonio Tajani as prime minister.

An old friend of Berlusconi, Tajani, who called the billionaire media mogul “Italy’s last great statesman”, would be the perfect proxy for the four-time-prime-minister to control.

But the 40% rule remains the all-important factor. It was ostensibly put in place to counter the rise of coalition-foregoing populist movements like Five Star and means that the chances of a hung parliament are more likely than any other result.

If no party gets enough support, there will probably be a re-run of the election next year.

Lo and behold, next year is when Berlusconi’s ban on holding public office off the back of a tax fraud conviction expires. In an interview yesterday, the 81-year-old admitted he would be “available” to run for the top job if the chance arose.

Even if Berlusconi’s alliance gets enough support this time around and installs Tajani as prime minister, the puppet premier could find a reason to leave the stage just in time for the European elections next year, so that the puller of the strings can have a fifth shot at leading Italy?

Despite the tax fraud sentence, alleged business links to the mafia and the numerous sex scandals, Berlusconi has weaselled his way back to the verge of power by promising “stability” and blaming his successors as PM for Italy’s various problems.

But his attempt to return to the summit of government comes on the back of a partnership with far-right Eurosceptics.

So Berlusconi’s claim to stability is like one of the gaudy shows on his TV channels: all glitz and zero content. Maybe there will be a repeat of previous elections, when Italy’s ex-pats rode to the rescue…

Time is running out to address concerns in a dispute over democratic freedoms mainly related to rule of law and judiciary reforms, Western states let Poland know. Meanwhile, Warsaw is preparing a white paper to defend its position.

No discount on rule of law can be expected when it comes to the anti-Soros campaign in Hungary and the infringement procedure against Poland, German minister of state for Europe, Michael Roth warned in an interview.

On track towards EU membership, the rule of law, judiciary and a legally binding agreement on normalising relations with Kosovo are the barriers Serbia has to break down, Commission President Juncker highlighted during a visit to Belgrade on his Tour de Balkan.

In an exclusive interview, Moldova’s foreign minister talks about his country’s relations with the EU and Moscow, the political situation ahead of crucial elections and the frozen conflict in Transnistria.

As a scandal involving the sale of CEZ Bulgaria to an obscure company is chipping away at Bulgarian PM Borissov’s image, he refuses to resign over what he believes was a plot to topple him while he was at the EU summit last week.

An EU proposal on the future treatment of Northern Ireland post-Brexit has prompted a war of words between London and Brussels, with UK Prime Minister Theresa May saying that it would threaten the “constitutional integrity” of the UK. Others accused it as an attempt to “annex” NI.

Wild bees and honeybees, which are crucial for pollination and reproduction of many plants as well as the joy at our breakfast table, are put at risk due to neonicotinoid pesticides, a new assessment by the European Food Safety Authority (EFSA) finds.

Index insurances, based on weather indices like rainfall and temperature, have been on the rise in projects in Sub-Sahara Africa. They are intended to help farmers cope with effects of climate change.

The Kawkab School in the middle of the narrow streets of Beddawi refugee camp Lebanon, a country which has the most refugees per inhabitant, is one of seven safe havens for refugee children hoping for a better future.

Commission President Jean-Claude Juncker concludes his Balkan trip in Sofia tomorrow, where together with High Representative Federica Mogherini and enlargement chief Johannes Hahn he will meet with Boyko Borissov.