The Brief, powered by BP – Searching for a Spanish statesman 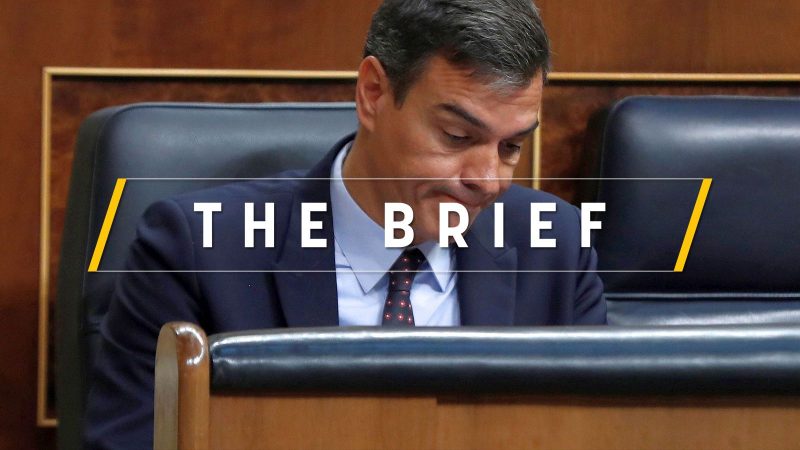 On 10 November, Spain will hold its fourth general election since 2015. The vote is the result of the lack of statesmanship among the party leaders in a critical period, especially of Socialist chief Pedro Sánchez.

Future looked bright for Sánchez back in April. Despite the inconclusive results of the general elections, he obtained a good result. He had options to win a parliamentary majority with the support of Unidas Podemos and other nationalist parties.

Meanwhile, centre-right Popular Party scored its worst result ever, deflating the likelihood of a right-wing block.

Sanchez’s victory was cheered by his Socialists comrades in Europe and propelled him to the driving seat in his political family. And Spain’s economic growth was envied by the largest eurozone partners.

But the stature he won abroad remained unmatched by his results at home.

After four months of negotiations, Sanchez was unable to gain enough allies. The blame game spread in every direction after King Felipe VI announced on Tuesday (17 September) he could not propose a candidate to win the parliamentary approval.

Every leader contributed to the collective failure. But no one like Sánchez.

Unidas Podemos leader Pablo Iglesias blocked the first attempt back in July given Podemos’ obsession with government positions instead of proposals.

The leader of liberal Ciudadanos, Albert Rivera, refused to meet with Sanchez, who wanted to obtain their abstention. Rivera’s U-turn at the very last minute this week was rather done for electoral purposes, as his intransigence otherwise risked scaring voters as it did with senior members that abandoned the party.

PP leader Pablo Casado softened his harsh rhetoric after the election debacle, but he never considered an abstention, despite the calls from party heavyweights.

As the winner of the election, Sánchez had the primary responsibility to seek a majority.

But there was no self-criticism from Sanchez and he felt no need to apologize before Spanish voters. “We all have to explain our position,” he said in a jaw-dropping response worth watching.

As internal polls looked good for the Socialists, Sánchez withdrew the offer of a coalition government with Podemos made only two months ago. His argument was that he could not trust the left-wing party, in particular given their position in favour of an independence referendum in Catalonia.

But the mistrust could have been addressed and a solution negotiated from the outset with a better strategy, as parties in Europe try to do to overcome their differences.

In Italy, a coalition was formed in 2018 after almost three months of talks; in Sweden, after four months; in Germany after six months; in the Netherlands after seven months. Belgian parties, deeply divided by language communities, never stop negotiating in 2010-2011 till they reached an agreement after 541 days of talks, a world record. Today, they are trying to form a new government again following May’s inconclusive elections.

In neighbouring Portugal, fellow Socialist Antonio Costa became the first prime minister who did not win the elections. He secured an unprecedented left-wing alliance with the Left Bloc and the Communist, after an intense month and a half of negotiations on priorities.

Some could argue that elections are part of the normal life of democracies.

But it is hard to find any parallelism with Sánchez’ short-termism. Since 2015, EU members Greece and Croatia also called for elections in less than a year.

But Alex Tsipras did it following the agreement on the third bail-out, a cash-for-reform package far from the promises he made when he became Greek prime minister in January 2015.

In Zagreb, the snap elections followed the collapse of the coalition government in 2016

Since the first failed attempt in July, Sánchez never tried to reach a deal with Iglesias and instead favoured new elections despite the troubling period ahead.

At a time when Spain needed a fully functional government to face the disorderly Brexit, the worsening of the trade war, the Supreme Court’s ruling on the pro-independence referendum or the risk of a recession, his attempt to scrap a few additional seats could hardly be described as statesmanship.

It is not certain that his gambit would play out as he intends, as the expected drop in turnout could punish him. Theresa May’s snap election in 20017 should have been a telling lesson for him.

Ursula von der Leyen’s Commissioner pick for the enlargement and neighbourhood policy, Hungary’s László Trócsányi, is appearing to be a particularly controversial one, though it may have been motivated by her wish to cool tensions between Brussels and Budapest.

More cabinet hires, info on their tasks ahead and provisional dates for Parliament hearings are all in our Commissioner tracker. Check it out here.

European Commission President Jean-Claude Juncker warned MEPs in Strasbourg that the risk of a no-deal Brexit remains ‘very real’, but said he is prepared to work ‘day in day out, morning until night’ to strike a deal.

Europe’s austerity-driven dogma has proved to be unsuccessful and should come to an end, MEP Tiziana Beghin told EURACTIV but stressed that the aim of her party, the Five Star Movement, is not to clash with the EU but to ensure there is more fiscal flexibility.

The Greens in the European Parliament were due to discuss whether to open “negotiations” with the 5-Star Movement about the party joining their ranks.

Spain will hold snap elections on 10 November, after acting PM Pedro Sánchez failed to get either the support of the leftist Unidas Podemos party or the abstention of the conservative Partido Popular and liberal-centrist Ciudadanos.

The Chinese telecommunications giant Huawei will boost investments into high-performance computing, its rotating chairman announced on Wednesday, as the company faces increasingly tense relations with the West, appearing in front of American judges this week.

The European Parliament’s Strasbourg plenary continues with Ursula von der Leyen having been asked to attend the Conference of Presidents.