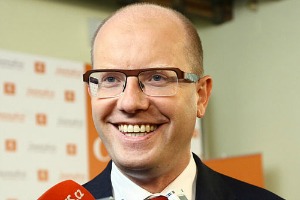 Three Czech political parties signed an agreement yesterday (6 January) to form a centre-left coalition government that will aim to shore up economic growth by easing a squeeze on state finances.

Under the agreement, Social Democrat leader Bohuslav Sobotka, 42, will become prime minister, returning his party to power after nearly eight years of centre-right rule in the European Union member state.

Sobotka, a trained lawyer and career politician, must now clear the final hurdle of convincing President Miloš Zeman to appoint his cabinet.

Czech economic growth has barely resumed after efforts to hold down state debt made consumers and companies cautious about spending, keeping the central European country in recession for most of the past two years.

The proposed coalition, which also includes two centrist parties, aims to keep the budget deficit below 3% of gross domestic product but will not aim to cut the deficit as planned by the previous administration.

"This [agreement] gives hope for a positive turnaround, for supporting growth, strengthening employment… improving stability and making people more satisfied with the overall functioning of the country," Sobotka told reporters.

Sobotka has pledged to bring the country of 10.5 million back into the European mainstream after a cool approach to the EU by previous right-wing cabinets. But the Czech Republic is not expected to adopt the euro before the end of this decade.

Sobotka urged Zeman to swiftly approve the new cabinet amid speculation that the president may drag out the process.

Zeman has roots in the same party as Sobotka but has long been his political foe and has signalled that he may refuse some of Sobotka's candidates for ministers.

"The president is not the fourth coalition party, he should respect the will of the parliamentary majority […] [He] should help the cabinet come into existence in January," Sobotka said.

Zeman, who became the first directly elected Czech president a year ago, has stretched the constitution to boost his own limited powers. Last July, he appointed a caretaker cabinet of his allies against the will of political parties, which remains in power until he appoints the new cabinet.

Sobotka has been negotiating the formation of a government since an early election in October. The previous centre-right cabinet collapsed last June after police charged then-prime minister Petr Ne?as's top aide with abuse of power.

That was just the latest in a string of scandals that have plagued Czech politics. The country has had 12 governments in 21 years since the split of Czechoslovakia, often with a narrow or no parliamentary majority.

The coalition will have 111 votes in the 200-seat lower house of parliament, but its stability is not guaranteed.

The biggest question mark hangs over the newly created ANO movement, one of the two centrist parties joining Sobotka's Social Democrats in the coalition.

ANO came second in the October election under the leadership of billionaire Andrej Babiš, who based his campaign on public anger with sleaze in the political establishment.

Babiš is expected to take the finance ministry in the new government, which also raises questions over potential conflict of interest. Babiš owns a web of over 200 companies, mostly in the chemical, agricultural and media sectors.

Babiš, 59, said he would focus on harnessing EU funds paid out for projects in poorer regions of the bloc. The programmes have caused a string of corruption scandals in the past.