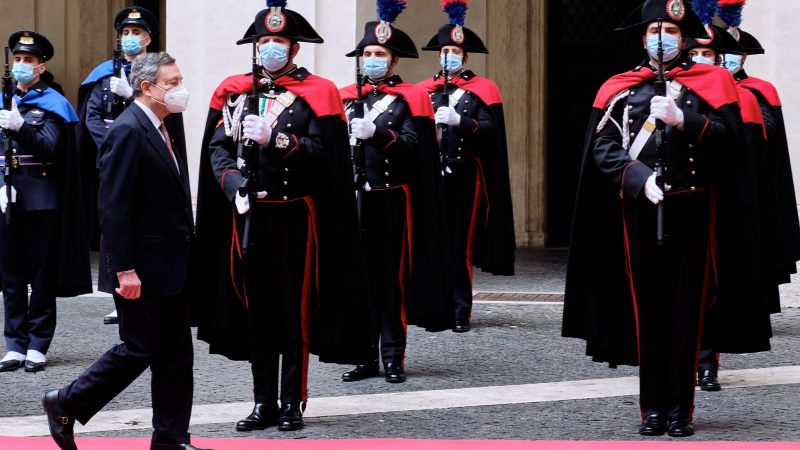 Germany and financial circles expressed optimism on Monday (15 February) at the taking over of the helm in Italy by Mario Draghi, a former head of the European Central Bank, nicknamed as ‘Super Mario’ by some media for his ability to navigate treacherous waters.

Draghi was sworn into office on Saturday at the head of a government of national unity to deal with the coronavirus pandemic and economic slump.

“In Italy, again, a pro-European government has been formed. That’s a very, very good sign,” Scholz told reporters ahead of a virtual meeting of euro zone finance ministers.

“Mario Draghi stands for a very smart policy, he is very experienced in fiscal policy. He is well connected internationally and he is a true European,” Scholz added.

The rating agency Moody’s said on Monday a new Italian government led Draghi was a positive short-term development for Rome’s credit rating, adding that challenges remained over the longer term.

The credit rating agency said in a report that it expected the new government to effectively use EU funds with a view to boosting Italy’s growth potential.

However, “as the urgency associated with the coronavirus pandemic fades, it is likely to face similar implementation challenges and political opposition to some structural macroeconomic reforms that we have observed with other governments in the past,” it said.

Commentators agree that much now rests on Draghi’s shoulders.

All but one of Italy’s major parties have rallied to his side and his cabinet includes lawmakers from across the political spectrum, as well as technocrats in key posts, including the finance ministry and a new green transition portfolio.

He is tasked with plotting Italy’s recovery from the pandemic and must immediately set to work on plans for how to spend more than €200 billion in European Union funding aimed at rebuilding the recession-bound economy.

If he prevails, Draghi will likely bolster the entire eurozone, which has long fretted over Italy’s perennial problems. Success would also prove to Rome’s sceptical northern allies that by offering funds to the poorer south, the entire bloc can be fortified.

“Your experience will be an exceptional asset for Italy and Europe as a whole, especially in these difficult times,” European Commission President Ursula von der Leyen wrote on Twitter, one of numerous leaders to send their best wishes.

Italy is mired in its worst downturn since World War Two, hundreds of people are still dying of COVID-19 each day, the vaccination campaign is going slowly and he only has limited time to sort things out.

Italy is due to return to the polls in two years’ time, but it is far from certain that Draghi will be able to survive that long at the head of a coalition that includes parties with radically opposing views on issues such as immigration, justice, infrastructure development and welfare.

Highlighting the political instability, Draghi’s government is the 67th to take office since 1946 and the seventh in the last decade alone.

Italy’s President Sergio Mattarella asked him to take over after the previous coalition collapsed amid party infighting. Draghi has spent the past 10 days drawing up his plans and unveiled on Friday his 23-strong cabinet, which included eight women.

The ministers, all wearing face masks, were sworn in one-by-one in a frescoed room in the Quirinal Palace before heading over to government headquarters for their first cabinet meeting.

Draghi told them their priority was “to safeguard the country” and urged them to lay aside their rivalries and work as one, ANSA newsagency reported.

Eight of the ministries went to technocrats, with the rest split amongst the six main parties that back the government — four for the 5-Star Movement, the largest group in parliament, three each for the Democratic Party, the League and Forza Italia and one apiece for Italia Viva and LEU.

As finance minister, Draghi called on an old colleague, Daniele Franco, the deputy governor of the Bank of Italy, while the sensitive job of justice minister was handed to the former head of the constitutional court, Marta Cartabia.

He also looked outside the political sphere for two new roles — technological innovation, which was entrusted to the former head of telecoms firm Vodafone, Vittorio Colao, and ecological transition, given to physicist Roberto Cingolani.

These twin positions play into demands by the EU that a sizeable chunk of its recovery fund should be used to promote the digitalisation of the continent and to shift away from a dependence on fossil fuels.

Draghi, a reserved figure who has no profile on social media platforms, will unveil his programme in the upper house of parliament on Wednesday and the lower house on Thursday.

Confidence votes will be held in both chambers and with just the far-right Brothers of Italy outside the cabinet, he looks likely to win the biggest majority in Italian history.