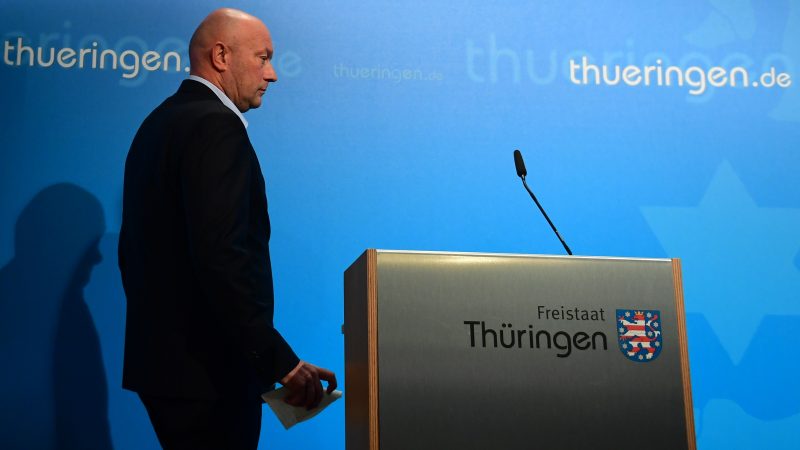 Thuringia’s freshly-elected Minister-President, Thomas Kemmerich of the liberal FDP party, stepped down on Saturday (8 February) after his alliance with the far-right Alternative for Germany (AfD) triggered nation-wide outrage.

For now, Kemmerich will remain in a caretaker role until new presidential elections are held in the former East German state. These are likely to take place in the coming weeks, as Kemmerich’s resignation alone cannot automatically trigger new parliamentary elections.

However, he and his aspiring minority governing coalition with the Social Democrats (SPD) and the Greens face the same challenge as before: they are four votes short of an absolute majority for Ramelow to win in the first or second round of voting.

Ramelow and the rest of the so-called red-red-green coalition have begun courting regional lawmakers from the Christian Democrats (CDU) and the FDP, but both have refused to support him thus far.

The national CDU has a long-standing policy of refusing electoral alliances with the extreme right (AfD) and the far-left (Die Linke). However, in Thuringia, Die Linke and the AfD together hold a majority of seats in the parliament, making the CDU’s position difficult if not untenable.

The liberals also seem unlikely to support Ramelow. Over the weekend, national FDP leader, Christian Lindner, claimed that Ramelow was not qualified to “calm” Thuringia after the crisis.

On the far-right, AfD leader Alexander Gauland, has publicly told his Thuringian members to support Ramelow to create the same storm that brought down Kemmerich.

Speaking to the Deutsche Presse-Agentur, he said: “The mindless reaction of CDU and FDP brings me to the recommendation for Thuringian friends to elect Mr Ramelow next time…because then he can not accept the office.”

Members of the red-red-green coalition have said they do not want rely on AfD votes to win a majority.

Under these circumstances, new parliamentary elections could be a solution. Die Linke state party leader Susanne Hennig-Wellsow explained: “If we don’t know in advance that Ramelow has a majority [without the AfD], then we will go to new elections.”

From Berlin, the Grand Coalition comprising the centre-right CDU/CSU alliance and the social democrats (SPD) held an emergency meeting on Saturday (8 February), calling for new elections to be held soon.

To trigger new elections, the state parliament must dissolve itself with at least two-thirds of its members voting in favour of the motion. This would require votes from either the AfD or CDU, who have both rejected the idea. Unless the political situation changes, the state parliament would fall short of the necessary threshold to do that.