Tsipras storms to victory: ‘Europe will not be the same’ 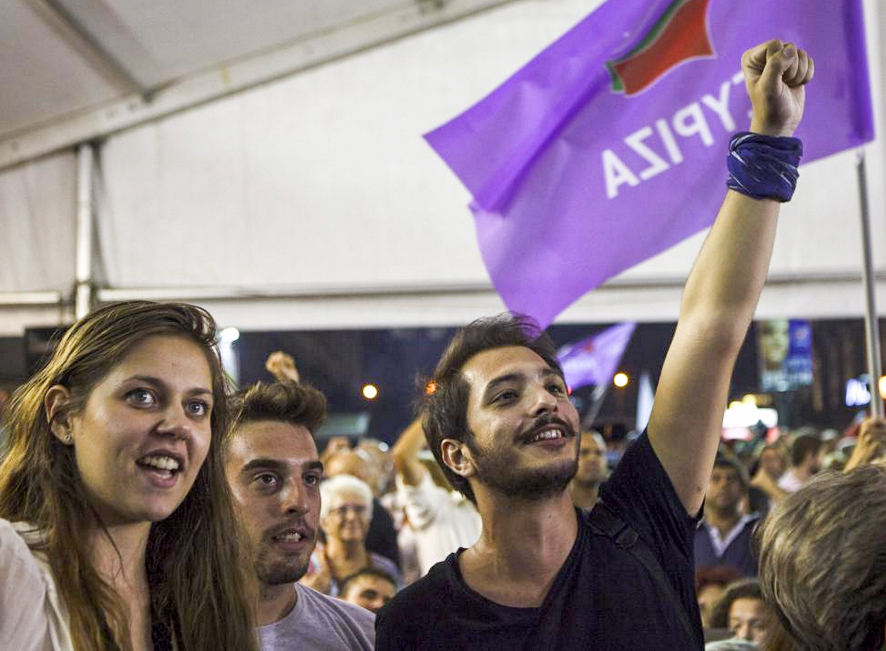 With nearly 90% of the votes counted, Tsipras’s Syriza party won 35.53% of the vote compared to 28.05% for conservative New Democracy and – in a sense of déjà vu – will again form a coalition government with the small nationalist Independent Greeks party.

As results showed the radical 41-year-old pulling ahead after a tight race, shadowed by painful tax rises and pension reforms that lie around the corner,

“It appears that Mr Tsipras’s Syriza is first. I congratulate him,” said the 61-year-old lawyer and former defence minister, whose defeat signals the end of a decades-long era in which the conservatives and socialists alternated in power.

Turnout stood at 56%, slightly less than in January, when six out of 10 voters cast their ballots, the interior ministry said.

In a victory speech to hundreds of cheering flag-waving supporters who turned out in evening heat on a central square in Athens, Tsipras said the victory would “turn the wheel” and “change the balance” in Europe. He also promised a new phase of stability in a country that has held five general elections in six years, saying his mandate would now see him through a full term.

“Today in Europe, Greece and the Greek people are synonymous with resistance and dignity. This struggle will be continued together for a full four years,” he said.

When elected in January, Alexis Tsipras became Greece’s youngest prime minister in 150 years, and a beacon for anti-austerity campaigners across the European Union.
‘Europe will not be the same’

“Europe will not be the same after our people’s victory,” he said before supporters broke into Italy’s revolutionary anthem, Bandiera Rossa, Italian for “Red Flag”.

But Tsipras also admitted that the country’s pledge to go forward with four years of painful reforms set out by Europe’s leaders would not be easy.

“We have difficulties ahead,” he told supporters. “Recovery cannot come through magic but through lots of work, stubbornness and struggle.”

Tsipras will also need to grapple with Greece’s central role in Europe’s refugee crisis, as the main entry point for tens of thousands of migrants who arrive by sea and trek up the Balkan peninsula to richer EU countries further north. He meets EU colleagues at an emergency summit over the crisis on Wednesday (23 September).

France’s President François Hollande and European Parliament president Martin Schulz, both left-wingers too, congratulated the premier-elect on his win.

“Greece will have a period of stability with a solid majority,” Hollande said.

But the new coalition is likely to have a slightly narrower majority of 155 seats in the 300-seat parliament, compared to 162 seats over the period from January to August, initial results showed.

Hands-down winner of a January general election, then with 36.34% of the vote, Tsipras resigned in August and called snap elections, gambling crisis-weary Greeks would give him a new mandate despite his contentious bailout deal with European leaders.

After winning office on an anti-austerity ticket, he agreed in July to more punishing austerity for the nation in exchange for its third financial rescue in five years.

He later argued he had effectively saved Greece from a chaotic exit from the eurozone.

But the move alienated many Syriza supporters and split the party, with a fifth of its anti-euro hardline MPs walking out, forcing Tsipras to call Greece’s fifth general election in six years.

He went to the polls facing a strong challenge from conservative leader Meimarakis, who had slammed the former premier’s U-turn with the country’s creditors and his chaotic months in power.

Over 9.8 million Greeks were registered to vote for a new government which will face the tough task in the next weeks of pushing through the belt-tightening reforms agreed under the three-year bailout accord adopted by parliament last month.

The reforms come in return for a new 86-billion-euro international rescue.

Signed days after Greeks overwhelmingly voted “No” to more austerity in a national referendum, the cash-for-reforms deal proved controversial, and Sunday many voters went to the polls with a heavy heart.

Tsipras made no specific reference to the 86 billion euro bailout, but Syriza campaigned on a pledge to implement it, while promising also to introduce measures to protect vulnerable groups from some aspects of the deal.

Tsipras’s first task after forming a government will be to persuade European Union lenders that enough agreed steps have been made to ensure the next payment. The bailout programme is due for a review next month.

Many Greeks expressed weariness with politics during the campaign, tired of voting and frightened by the prospect of still more uncertainty that would worsen one of the worst depressions to hit an industrialised country in modern times.

Some voters said they backed Syriza because Tsipras needed time to finish the job he began. “They were … the ones who signed the bailout so they have to implement it,” said Fani Arvanitidi, 70.

Yanis Varoufakis, the outspoken former finance minister who infuriated EU officials with his refusal to accept their proposals, called the election “the ‘legalisation’ of the capitulation that followed the signing of the dead end, humiliating and irrational” bailout.

Despite the broken promises, many voters believed Tsipras had their interests at heart and represented a break with past leaders perceived as corrupt.

“We want to be done with thieves, first the Germans and then the conservatives and socialists,” 63-year-old Efthymia Xanthou told AFP.

Economic analysts responded positively to Tspiras’s win. “Greek voters now seem to have given him the chance to do better,” said Berenberg’s Holger Schmieding.

“After years of almost unprecedented crisis, the vast majority of Greeks are endorsing parties that are promising to keep the country in the euro even if that implies thorough and painful reforms,” he said.

Of the nine parties hoping to enter parliament, eight seem likely to win seats in the next parliament.

Partial official results showed neo-Nazi party Golden Dawn again in third place with 7.01% of the vote, followed by the Pasok socialists who garnered 6.37%.

The centrist To Potami party is likely to finish with a mere 3.65%, while the small anti-corruption Centrist Union party will exceed the required 3.0% threshold and enter parliament for the first time.

Nearly 45% of Greeks sat out the election – the third vote for Greeks this year including a referendum on austerity – a significant rise in the previous abstention rate of 36 percent in January.

If approved by parliaments, this will be the third rescue programme for Greece in five years. It will be managed by the European Stability Mechanism (ESM), the eurozone permanent crisis resolution fund that was initially set up five years ago in an effort to save Athens from bankruptcy.