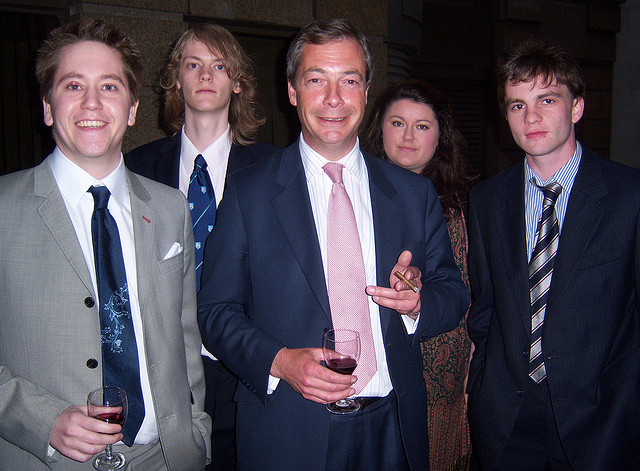 UKIP made strong gains in local elections in England, siphoning support from Prime Minister David Cameron’s Conservatives as it capitalised on discontent about immigration and mainstream politics.

The gains by the UK Independence Party, which wants Britain to leave the EU, will pile pressure on Cameron to toughen his approach to Europe and alarm some in his party who worry UKIP could scupper the Conservatives’ hopes of winning next year’s national election.

The strong support for UKIP indicated by early local council results suggests the party could also do well in elections to the European Parliament, also held on Thursday.

If borne out by full results, the outcome of the local elections is a major triumph for fast-talking UKIP leader Nigel Farage, a former commodities trader who has styled himself and his party as an antidote to Britain’s three main established parties, whom he accuses of offering the same policies and of ignoring voters’ wishes.

Partial results from around a third of English councils on Friday showed UKIP won 89 new seats in local elections.

Labour won 105 new seats, the Conservatives lost 96, and the Liberal Democrats lost 103, according to the early results.

While the opposition Labour gained seats, the result could still spell gloom for the party, which is challenging Cameron’s Conservatives in next year’s national election. Labour’s showing so far raises doubts about its ability to win that vote and could trigger internal discontent about the performance of its leader Ed Miliband.

Farage told reporters he was cheered by the early results and thought they were a good platform to challenge for seats in the 2015 national election.

“Looking at the average vote shares across the country, and without wishing to count any chickens before they’re hatched, it looks pretty good,” he told reporters.

Often photographed with a pint of beer in his hand and a cigarette in his mouth, Farage’s plain-speaking man-of-the-people style has struck a chord with many voters, who he says find more established politicians mealy-mouthed and bland.

“My colleague Winston McKenzie said the UKIP fox was in the Westminster hen house and it does feel a bit like that,” he added, referring to the seat of the British parliament.

Farage’s rivals said they thought his success was a protest vote that highlighted how concerned voters were, particularly about immigration levels which Cameron has promised but failed to curb.

“I think Nigel Farage, for quite a lot of those people, is just a two fingers stuck up at what they feel is a sort of hectoring, out-of-touch elite,” Jeremy Browne, a Liberal Democrat lawmaker, said on BBC TV, referring to an obscene gesture.

The European elections were held on the same day, but the results will not be announced until Sunday evening, in line with the rest of the EU. They will determine the political persuasion of Britain’s 73 lawmakers in the 751-seat European Parliament.

Cameron once called UKIP a party of “fruitcakes, loonies and closet racists”. But Farage has denied his party is racist and promised to use the European and local elections to trigger a “political earthquake” in Britain.

His party made strong gains in traditional Conservative heartlands in places such as Essex in the southeast of England, and in Labour strongholds such as Rotherham in the north, and Birmingham, in the Midlands.

Cameron has promised to try to reshape Britain’s ties with the EU if re-elected next year, and to give Britons an in/out EU membership referendum by the end of 2017. UKIP wants an immediate referendum.

UKIP has floated the idea of forming electoral alliances with Conservative candidates in next year’s national election, but a senior Cameron ally on Friday rejected that idea.

“There’s been a vote for UKIP and that sends us a very clear message that people have concerns about immigration, about welfare, about schools and skills of course,” said Michael Gove, the Conservative education minister.

“We will pay attention to those concerns.”

British Eurosceptics, such as the UK Independence Party, see the EU as an oppressive, wasteful superstate that threatens Britain's sovereignty, want a referendum on whether to stay in the EU. They are expected to make big gains in this week's elections.