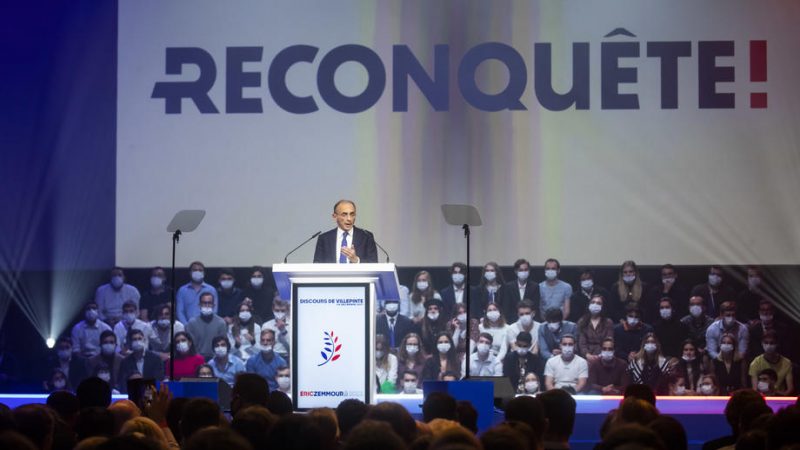 French far-right polemicist and candidate to the 2022 French presidential elections Eric Zemmour delivers a speech during his first campaign rally after announcing his candidacy on social media the 30th November, in Villepinte, near Paris, France, 5 December 2021. [EPA-EFE/CHRISTOPHE PETIT TESSON]

French far-right presidential candidate Eric Zemmour promised on Sunday (5 December) a “reconquest” against decades of decline at his first political rally, as scuffles with anti-racism protesters broke out on its fringes.

“If I win this election, it won’t be another rotation of power but a reconquest of the greatest country in the world,” Zemmour said in a nearly hour-and-a-half-long speech.

He said he was calling his party “Reconquest”, a name that evokes the historic period known as the Reconquista, when Christian forces drove Muslim rulers from the Iberian peninsula.

With echoes of Donald Trump’s first campaign for US president, Zemmour promised to slash immigration and taxes to cheers from flag-waving supporters that organisers put at 15,000. A Reuters count put their number at around 10,000.

Fighting broke out when leftist infiltrators at an Eric Zemmour event north of Paris tried to stage a disruption. Zemmour is a right-wing candidate running to be president of France. pic.twitter.com/BuFSFAUob0

Separately, as Zemmour moved through the crowd towards the stage to give his speech, a man lunged and grabbed him briefly by the neck before being tackled by security and later put in custody by police.

Although Zemmour went on to deliver his speech, his team said afterwards that he had been injured in the incident and a doctor had ordered a nine-day rest, Le Monde newspaper reported.

Before the rally started, police arrested several dozen anti-Zemmour protesters and chased away others near the giant convention hall north of Paris. Hundreds of protesters also marched in Paris.

The former journalist and commentator ended weeks of speculation about a run for the presidency on Tuesday, declaring his candidacy in an online video.

Zemmour, who has been convicted for inciting racial hatred, is the main challenger to long-time far-right figure Marine Le Pen for a place in a second run-off round of next April’s election, most likely against President Emmanuel Macron.

Known for provocative statements against Islam and immigration, he has won support away from both Le Pen’s voter base but also the mainstream conservative right.

He said he aimed to bring immigration to zero if elected and cut taxes for the working class and companies, while abolishing inheritance tax on family businesses. He also said he would pull France out of the integrated military command of the North Atlantic Treaty Organisation.

He also said that France should not be subject of the decisions of European courts.

Zemmour courted disillusioned supporters of traditional conservatives, describing as his “friend” right-winger Eric Ciotti, who did far better than expected in the centre-right Les Republicains’ primary election for the conservatives’ candidate.

Ciotti ultimately lost out to the more moderate head of the greater Paris region, Valerie Pécresse, in a run-off vote on Saturday.

At a smaller political rally, hard-left candidate Jean-Luc Mélenchon pushed back against the lurch to the right, telling supporters: “No, France is not all about the far-right, France is also about social security, public health.”