Joel Schalit is News Editor of euractiv.com, and comments on European affairs for Israel’s i24news. This article is excerpted from his forthcoming collection, Everywhere But There: Essays on Europe’s Diversity Crisis. His most recent book is Israel vs. Utopia.

I don’t make it a habit of writing letters to heads of state.

But, on the 75th anniversary of the Nazi decision to force Jews to wear yellow badges, I decided to ignore my inhibitions and start writing to you. As an Israeli national, who moved to Berlin six years ago, you’re the only chancellor I’ve ever lived under. And I’m sentimental about history.

However, I put my pen down, when I realised that the best way to honour the anniversary would be to talk to you about its significance several days later, after the election in your home state, Mecklenburg-Pomerania. The tie between the dates would be significant, and, as expected, the extreme right Alternative für Deutschland party, would beat your own party in the poll.

The connection, of course, is obvious. As your Vice Chancellor, Sigmar Gabriel said, the AfD are Nazis, and have built their party’s popularity based on outing minorities. Not Jews, in this instance, but Muslims. Longstanding citizens of your country, whom the retro extremists have turned into a new fifth column. Sound familiar? Their religion, through the AfD’s lens, is the new yellow star.

If it’s not the burka, it’s the burkini. If it’s not their religious slaughter requirements, it’s their insistence on circumcision. Everything that signifies Islam, in Germany, has become a topic of debate, as though their religion, had just touched down in the country, and is something that white Germans have a right to evaluate. Pollsters blame you, of course, and your liberal refugee policy.

What I see, following the 75th anniversary of the yellow star badge, is a country that is once again descending into scapegoating minorities, for reasons which, while having little to do with reality, are firing up a Nazi-inspired constituency for the first time since World War II. This happened under your watch. I know you care, but you should have done more to stop it. 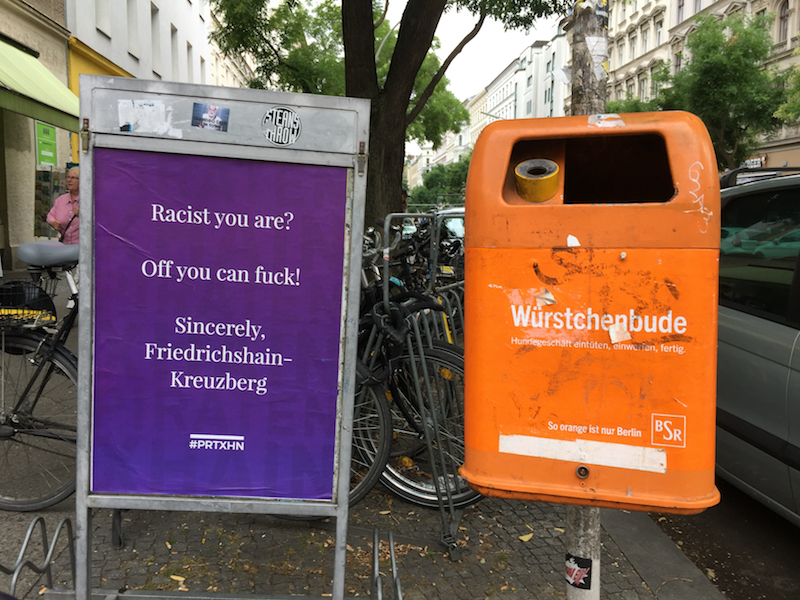 I’m not referring to your decision, chancellor, to let so many Muslim refugees into the country. Because of its role in facilitating the US War on Terror, and because of its co-responsibility for the Palestinian refugee crisis through the Holocaust, Germany has a special obligation towards the Middle East, inseparable from its obligations towards Israel. You did the right thing.

By taking in so many Arabs and Muslims, unconditionally, Germany was expressing its complicity in the crisis that drove them to Europe. That took a lot of guts, as well as a lot of compassion, and is an expression of de-Nazification, and the leadership required of Germany, at this point in time, as one of the less considered obligations created for it by Hitler’s genocide.

The problem, in this Jewish immigrant’s view, is what you did when public opinion started to turn against you. While you repeatedly defended your actions, your government also fumbled badly cutting EU deals that violated the Geneva Convention, for example, with Turkey, to swap refugees, while at the same time, undertaking mass deportation measures aimed at placating would-be AfD voters. The dual loyalty charge, against German Turks, was especially odious.

The messages these initiatives sent were clearly conflicting, and transparent, in much the same way that centrist governments, trying to match the growth of neo-Nazi parties like Austria’s FPO, and France’s National Front, adopt their paranoid rhetoric and security policies, and move their countries rightwards. The strategy always backfires, as voters sense the disingenuousness and vote for the real thing.

Your responsibility, Chancellor Merkel, is to build on the successes of de-Nazification, and take Germany one more step forward, in its post-WWII rehabilitation process. There is much to build on, and there is a lot of support amongst Germans. You just have to take more serious steps, which radiate conviction more than they do compromise. Trying to cater to the right will be your downfall.

The stakes are clear. A Germany run by Alternative für Deutschland, even if just ideologically, will mark the end of the democratisation project begun with the defeat of the Third Reich, and reinvigorated by the fall of the Berlin Wall. 1.5 million recent immigrants depend on this, as do all the minorities who have made Germany their home since the 1950s.

We are not an insubstantial constituency. 1 in 8 Germans is said to be of immigrant background, and the Jewish population has started to grow in ways unforeseeable 25 years ago. I am one of them, having arrived in 2010 with my partner, who helped start a thriving design business, in Stuttgart. And we are a Jewish family, living in a primarily Muslim part of Berlin, Neukölln.

Though we find the poverty in the neighbourhood trying, I could not feel more culturally at home there, either. Neukölln is in many ways the version of the Middle East I always sought at home, where Jews and Muslims live peacefully, side by side, and the local cuisine every bit as good as what I miss about Jerusalem and Tel Aviv. To live in such an area, given what happened under the Nazis, in Berlin of all places, is an irony I will never get over.

That’s one of the achievements you have to defend. Neukölln is not the only part of Germany where one can speak of such successes, either. There are other communities like ours. The problem is that de-Nazification is a much bigger, and more complex project than anyone ever anticipated, and you got stuck with the hardest part of all. Whether you stand for office again or not, you have to find a way to make Germans understand the importance of tolerance.

Not just towards Jews. Every neo-Nazi outfit in Europe has something positive to say about Israel these days. They exercise a near monopoly on my country’s rep amongst Europeans, reinforcing their justifiably negative feelings about our treatment of the Palestinians. What many Jews in Germany discern is that the tolerance extended to us was never universalised, extended to Germans of all religions and ethnicities. That would represent a true overcoming of the heritage of fascism.

Alternative für Deutschland’s main source of strength is its ethnocentrism. Unlike any other party of its kind since the NSDAP, it has succeeded in making racism respectable again, by allowing Germans to feel safe discriminating against Muslims. Your job is to make that untenable and taboo, in much the same way that your predecessors made anti-Semitism unacceptable. Islamophobia is that achievement’s undoing, and requires more than just 1.5 million refugee bodies to overturn.