The Brief — Merkel enters the ring 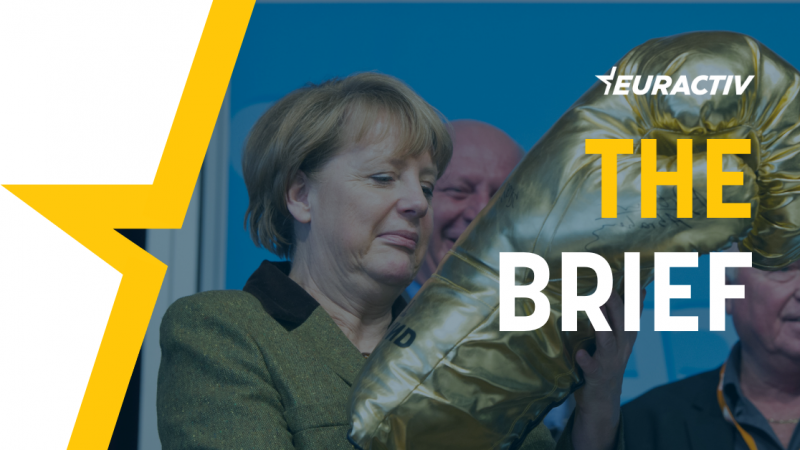 Angela Merkel, the eternal chancellor. Calm, collected, and generally unwilling to debase herself in the political arena. Sixteen years of calm rhetoric are coming to an end just as her conservatives face historic polling lows.

State of the nation or union addresses are en vogue these days. As we await Commission President Ursula von der Leyen’s State of the Union speech next week, the question is whether it will be as atypical as Merkel’s was on Tuesday (7 September), when she took off her gloves and entered the fray.

The 26 September election in Germany is the first where an incumbent chancellor is not up for re-election, and Merkel had somewhat awkwardly chosen to stay out of the election arena.

To begin with, Merkel did not publicly chime in on the intra-party talks on who could, or should, succeed her at the helm of the CDU.

She did not budge as her would-be successor Annegret Kramp-Karrenbauer’s grip on the Christian Democrat Union slipped following the Thuringia far-right debacle in 2020.

Merkel had stood silently on the sidelines, content to govern the world’s fourth largest economy and navigate the troubled waters of the COVID-19 pandemic.

That silence ended on Tuesday, however, as she used her state of the nation address to aggressively campaign on her party’s behalf.

Jeered by the opposition parties, applauded by her conservative colleagues, Merkel laid out why a coalition led by the social democrat Olaf Scholz would threaten German prosperity and stability.

She instead offered her party’s candidate, Laschet, as a safe pair of hands to protect her legacy.

Commentators were rightly stunned, as Merkel going on the offensive to that extent is extremely rare. Laschet was clearly jubilant, grinning in parliament while Merkel sang his praises.

One thing is certain: Merkel has entered the ring and she stays there for the coming weeks.

And she’s a heavyweight amongst heavyweights: Merkel is still by far the most popular politician in Germany and many voters consider her the face of politics, having grown up with her at the helm.

Still, it might just be too late to turn the tide of an election that appears to have slipped out of the conservative union’s grasp. Mail-in voting may have locked in the results already.

Driven by the emergence of a fourth wave of COVID infections and the prominence of the Delta variant in Germany, mail-in voting figures are expected to be at an all-time high.

Michael Kellner, the campaign manager of the Green party, projected that about 40 to 50% of total votes would be mail-in, compared to 28% of people who voted by mail in 2017.

Mail-in voting in Germany is possible six weeks ahead of an election day.

The question is whether Merkel’s intervention, less than three weeks before in-person voting starts, will be enough, or if it is too little, too late?

Starting off with a strange one — just weeks before the Russian election, opposition politician Boris Vishnevsky found that two of his opponents had not only his exact name and surname, but even the same facial hair, on the official ballot.

In a sweeping call to world leaders, UK home secretary Priti Patel launched London’s push to better address child sexual abuse and other safety concerns online. Officials from the EU’s sector of the 5Rights Foundation echoed Patel’s ideas, stating that the EU is well-positioned to take a strong stand on behalf of children.”

The Taliban has emphasized a new “tolerant” approach, but the backgrounds of its newly appointed government officials suggest otherwise. Sirajuddin Haqqani, the new interior minister, is the son of the founder of the terrorist Haqqani network and is one of the FBI’s most wanted men.

And major world powers aren’t buying that “tolerant” approach, by the way. Peter Stano, the EU’s lead spokesperson for foreign affairs, said “worrying reports” from Afghanistan indicate that the Taliban is not complying with international human rights requirements. Foreign ministers from 20 countries, led by the US and Germany, are set to meet regarding the new Afghan government on Wednesday evening.

More from Germany: motor industry executives have made it clear that the next German government, to be elected on 26 September, must fight against the EU’s upcoming ban on internal combustion engines. Industry heads emphasize the importance of decarbonising transport “in a way that is open to all technologies.”

But that may be easier said than done — the EU’s newly released Strategic Foresight Report identifies “climate change and other environmental challenges” as Europe’s greatest obstacle in the coming decades. Commission President Ursula von der Leyen said in a recent speech that “climate change is THE defining challenge of our time.”

Still on the environment, agricultural stakeholders issued a declaration on Tuesday outlining issues with the current policy and its “extremely worrisome trends” ahead of the European Parliament’s initial vote on the Farm to Fork strategy.

Greece is dealing with climate issues of its own after this summer’s wildfires decimated over 10,000 beehives, resulting in losses of up to 10,000 tonnes of honey each year for the next 30 years. Experts say this opens the door to an increase in cheap honey imports.

In the Balkans: Greece will stick to its position of not recognising Kosovo’s statehood and has called on both Serbia and its former province to continue EU-facilitated talks, Alternate Minister of Foreign Affairs Miltiadis Varvitsiotis told EURACTIV Serbia in an interview.