The Brief, powered by EHFG — The rise of the kingmakers 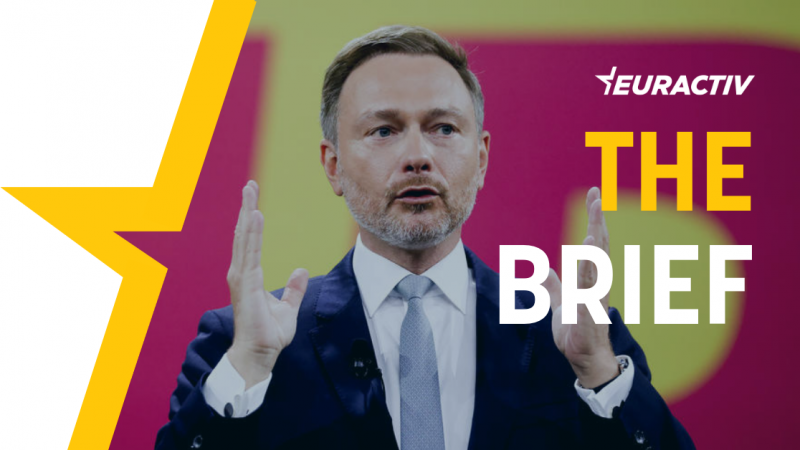 With the new German parliament likely to be more fragmented after the federal election on Sunday (September 26), several small parties are preparing themselves to play a kingmaker role in the subsequent coalition-building talks.

While the Social Democrats are to become the largest party in the Bundestag, according to recent polls, gathering the most voters may not necessarily translate into clinching the chancellorship.

The liberal FDP has already made it crystal clear that they would prefer a coalition with the conservative CDU/CSU, even if they come out second in the election.

“The race for first place is interesting but not essential for building a coalition,” FDP party leader Christian Lindner told the Bild am Sonntag and emphasised that what matters is putting together a majority in the Bundestag.

The CDU/CSU has already jumped on the bandwagon, with the prime minister of the state of Hesse, Volker Bouffier, stating that the party will push to build a coalition under their leadership even if they lose the election to the Social Democrats.

Should this become reality, it would likely take the shape of a so-called ‘Jamaica-coalition’ between the CDU/CSU, the Greens and the FDP.

Such a constellation was on the table after the 2017 German federal election only to be torpedoed by the FDP who complained of being sidelined during the talks.

This time around the FDP seems better prepared, especially as Lindner and CDU/CSU candidate Armin Laschet share a warm relationship and have already governed together in the state of North Rhine-Westphalia.

However, the FDP is not the only potential kingmaker in town. Recent polls suggest that a coalition on the left, with the SPD, the Greens and the Left party, is also in the realm of possibilities.

While the leftist Die Linke was long deemed to be unfit for office, Lindner’s hesitancy to openly commit to a coalition with the Greens and the SPD has opened the door for such an option.

However, such a coalition would cause many headaches for the SPD and the Greens.

Firstly, Die Linke wants to abolish NATO and is advocating for a rapprochement towards Russia. Both the Greens and the SPD have signalled repeatedly that an unconditional commitment to NATO is a precondition for any coalition talks.

But even if the Left party agreed to drop their radical stance on foreign policy for the sake of government, a coalition with them could risk alienating the more conservative swing voters who have switched from the CDU/CSU to the Greens and the SPD.

However, the mere possibility of a coalition on the left is increasing the pressure on the FDP to be more open for talks with the SPD and the Greens.

But the hurdles for this remain high, as the parties’ stances on economic and fiscal policy are miles apart.

In an interview with RTL, Lindner said he currently “lacks the imaginary power” for such a coalition to take shape.

With so many potential coalitions on the table, and given the differences among the parties, the road to forming a new government will likely be long and winding. In time for Christmas? Our guess is as good as yours.

This weekend’s German federal election is already considered historic, and it hasn’t even happened yet. Confused? Check out EURACTIV’s video for a full breakdown of what’s going on in Berlin.

And this election sits partially on the backs of the older generations — records show that roughly 60% of German voters are over the age of 50, which has sparked concerns for many young people under the legal voting age. One stakeholder expressed that “all generations must do their part.”

Speaking of concerns, the future of Europe’s fiscal policy has been heavily debated among German politicians ahead of the election. Parties are divided on whether the EU should work towards a full fiscal union or move back to austerity policies — and Germany’s post-election stance will help make the decision.

Less than 1% of the population in low-income countries are fully vaccinated, versus 55% in richer countries — and Amnesty International says the cause of this disparity is Big Pharma. Amnesty says the pharmaceutical companies supplying the vaccine work for the benefit of themselves and rich countries, all at the expense of those who need the vaccine most.

Still on the health front: The European Commission has signed a joint procurement framework contract with drugs company Eli Lilly for the supply of monoclonal antibody treatment for coronavirus patients.

Who’s to blame for high gas prices in Europe? US officials and European MEPs say Russia is behind the “manipulation” of gas prices and supply, while Russia says the price surge stems from problems with EU policies.

EU energy ministers met on Wednesday to discuss the price surge and how to protect citizens, as benchmark European gas prices have risen by over 250% since January. Some national governments are considering protective measures such as subsidies or price caps, but others hope the European Commission will step up to the challenge.

Developing nations welcomed US President Joe Biden’s increased climate finance pledge, but leaders have warned rich countries that they must do more to ensure the poorest received the assistance they need.

And Denmark, a close ally to the US, has sided with the US and Australia regarding the controversial submarine contract, which France was recently cut out of. Danish Prime Minister Mette Frederiksen defended Biden as “very loyal” to Europe.

After Illumina acquired GRAIL for $7.1 billion, all eyes are on the European Commission’s new guidance on merger control, but also on the EU’s competition chief Margrethe Vestager’s resolve to expand the bloc’s supervision of such mergers.

Last but not least, check out this week’s edition of our Green Brief to stay on top of environment and energy news.