The Brief, powered by EPRA — A yellow traffic light for fiscal integration 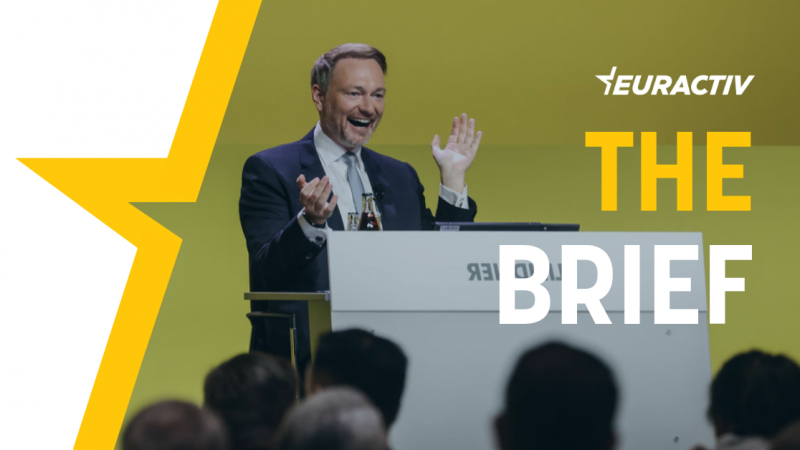 “Generating energy from friction,” “focusing on the joint big picture,” — the parties likely to form Germany’s new government are competing for the blandest metaphors in an effort to signal love, peace, and harmony within the budding three-way alliance.

On Friday, the Social Democrats (SPD), the Greens, and the business-friendly FDP announced that exploratory talks had yielded a twelve-page preliminary agreement.

The next step is formal talks for a potential “traffic light” coalition — red for the SPD, Green for, well, the Greens, and yellow for the FDP.

Wherever money is involved, however, harmony can be very fragile.

Indeed, fiscal policy is one of the main sticking points for the would-be trio: On one side, the SPD and the Greens ran on a platform of ramping up public investment, financed by more progressive taxation and additional debt. On the other, the Liberals support budgetary discipline and staunchly oppose raising taxes.

The fiscal friction is not just a national matter, as the parties’ divergence also extends to questions about fiscal integration and the EU’s budgetary rulebook for member states, the Stability and Growth Pact.

Germany’s stance on the issue will soon become key, as the European Commission is working on an overhaul of the fiscal rulebook. On Tuesday, Commission vice-president Valdis Dombrovskis and Commissioner for economic affairs, Paolo Gentiloni, presented their plans for a relaunch of the Pact, which is currently suspended due to the Covid-19 crisis.

Among the issues at stake are the Pact’s strict debt and deficit limits for national budgets.

While the FDP wants to stick to the existing Stability and Growth Pact, the SPD and the Greens have shown themselves open to reform and have proposed to orient it more towards sustainable finance.

So, what answers does the preliminary agreement offer about the likely new government’s stance?

The first takeaway is that the traffic light seems to be set on yellow, as the FDP’s handwriting is very apparent on fiscal policy.

According to the paper, the potential coalition would work “on the basis of the stability and growth pact” and ensure Europe’s debt sustainability. On the national level, it would stick to the debt brake and not raise taxes.

However, while the FDP seems to be in the driver’s seat on fiscal policy for now, the preliminary paper is, indeed, preliminary and leaves plenty of room for interpretation as key questions are left unanswered.

The document does not specify, for instance, whether it refers to the Pact in its current form or a reformed version that might be hammered out in the coming months.

Neither is it clear whether “sustainable finance” refers exclusively to fiscal sustainability or whether it also includes investments in (climate) sustainability – an interpretation that the SPD prefers and which would also be in line with the Commission’s stated ambition to boost public investment in the green economy.

The European Commission has promised to dedicate more funds to rule of law programmes for countries in the Western Balkans in its annual enlargement package, which was announced on Tuesday. “The package puts even greater focus on closely monitoring fundamental reforms, starting with the rule of law, the functioning of democratic institutions, public administration and economic reforms,” said Enlargement Commissioner Olivér Várhelyi.

And in its enlargement report on Serbia, the Commission highlighted Belgrade’s ‘significant misalignment’ with EU foreign and security policy. “Serbia is moderately prepared in the area of common foreign, security and defence policy”, the report said, adding that “a number of Serbia’s actions were contrary to EU positions on foreign policy.’

Jailed Kremlin critic Alexei Navalny, who was poisoned in August 2020, has won the European Parliament’s annual human rights prize for his efforts to challenge Russian President Vladimir Putin’s grip on power. “He has fought tirelessly against the corruption of Vladimir Putin’s regime. This cost him his liberty and nearly his life,” said European Parliament President David Sassoli.

And across the border: Georgia’s jailed ex-president and opposition leader Mikheil Saakashvili has vowed to keep refusing food in prison, even after doctors recommended that he be hospitalised. Saakashvili, Georgia’s president from 2004 to 2013, was arrested and imprisoned upon his return from exile in Ukraine on 1 October.

The consumption of opioid painkillers increased in Europe during the COVID-19 pandemic, but experts say the uptick is a far cry from the opioid crisis in the United States. Opioids are prescribed in Europe in “a more controlled way than in the United States, where there was a sales campaign, a pharmaceutical company that lobbied, doctors that were getting bonuses,” a researcher said.

In a letter to the Commission, Poland argues that Russia’s attempt to link the increase of European gas deliveries with the completion of Nord Stream 2 “can only be treated as a misleading and manipulative attempt and clearly show the instrumentalisation of gas supplies by Russia to achieve a political objective.” Poland has called on EU officials to “initiate an in-depth investigation” into Gazprom for potential abuse of dominant market position.

The battery market is currently dominated by Asia, but the EU hopes that new laws setting strict green criteria for batteries sold in Europe will boost domestic production and help the continent stake its place as a global leader. The proposed battery regulation process covers every stage of production, from the extraction of raw materials, to manufacture, until the eventual disposal of the battery.