The Brief, powered by EPRA — Beaten at the post? 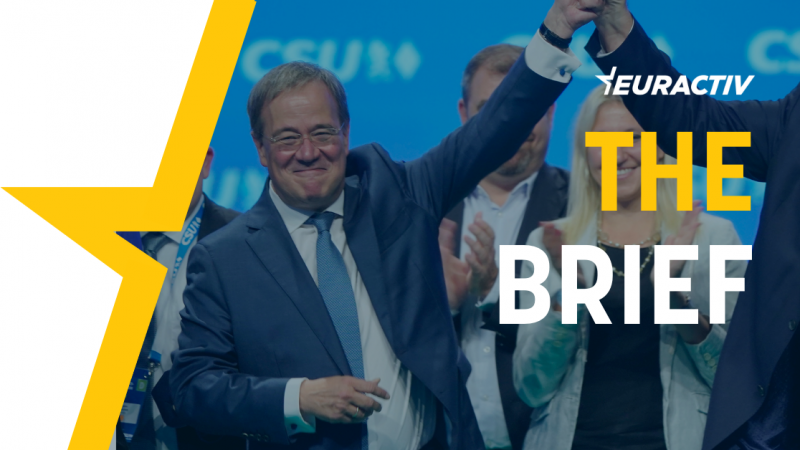 With only ten days to go, the German election race is expectedly picking up pace. But just as things are getting heated and — for German standards — dirty, much of the election action might already have been completed.

Technically, Germans are set to head to the polls on 26 September, but this time around, more voters than ever are casting — or have already cast — their ballot by mail.

According to polling institute Allensbach, 40% of voters plan to use postal voting and the time window for doing so has already been open for four weeks.

It is quite likely that many Germans have already placed their cross.

For the Social Democrats, currently in pole position, this is happy news: They have been topping the polls and would probably be quite happy if everybody had already voted – before any of the financial scandals associated with their top candidate, Olaf Scholz, blow up again.

On the flip side, Chancellor Angela Merkel’s conservative union of the CDU and CSU is on the defensive as the CDU has dropped to historic lows in the polls. A high number of postal votes — if they are in line with current polling predictions — could put an end to their hopes of overtaking their current junior partner on the home straight.

What is more, the conservatives have left key campaign milestones for the last minute: Their candidate, Armin Laschet, presented his “team for the future” of eight party colleagues in early September while a programme for the first 100 days in office was only unveiled on Monday (13 September).

Did Laschet’s campaign team miss the memo on absentee voters’ clout? This seems unlikely, as in July high-ranking party members talked about winning over postal voters early on.

What is more plausible is that after 16 years of Merkel’s firm grip on the chancellery, the party has become complacent and the recent poll slump just took them by surprise.

With many mail-in ballots already in the box, will the conservatives’ last-minute efforts be in vain?

There might still be some hope that the tide can turn, as those who have not yet cast their vote are more undecided than ever. According to the Allensbach Institute, 40% of respondents said they were planning to vote but did not yet know for whom.

As the top reasons for their indecision, they overwhelmingly say that none of the contending parties or candidates have convinced them and that they do not know what to expect after the elections.

However, ever since Scholz took the lead, Laschet has changed tack and focused on discrediting his opponents, warning that Scholz might form a left-wing coalition with the Greens and far-left Die Linke if he comes out on top.

Whether this is the best recipe to entice voters who already do not like any of the offered options and are stumped at the post-election coalition game is questionable.

Next week, we will know more.

As new COVID-19 variants emerge, the same could go for vaccines. At the moment, all widely-used coronavirus vaccines are equipped to deal with variants, but as variants mutate, experts say that vaccines may need to be quickly adapted.

EU lawmakers voted by a large majority on Wednesday to extend the mandate of the European Centre for Disease Prevention and Control (ECDC), with the goal of “improving preparedness and coordination of interventions to manage health challenges.” MEPs also hope to extend the ECDC’s authority to include major non-communicable diseases, including cancer, diabetes and mental illness.

And in a controversial move, the Parliament and Commission have united to approve new anti-microbial rules, allowing the restriction of “crucial antimicrobials” for human medicine only. Critics worry that the new regulations will be damaging to the overall health of animals.

Once again keeping relations with Africa on the back burner, Commission President von der Leyen promised during Wednesday’s State of the Union address to donate €1 billion to boost vaccine production and invest in green energy for a “Global Gateway.” Civil society leaders described her promises as “a drop in the ocean.”

The European Commission has released its first official Recommendation regarding journalists’ safety, in the midst of an increasingly hostile, anti-journalist attitude across Europe. The recommendation centres around the physical safety of journalists, but also details the importance of psychological and technological protection.

And in an effort to counter increased unemployment among young people, the Commission is launching ALMA, a new Erasmus-style programme which provides short-term employment in other member states to young Europeans. Von der Leyen emphasised in Wednesday’s speech that 2022 would be “the Year of European Youth.”

By the end of the year, the Commission has promised to publish a policy paper on “the sustainable management of the carbon cycle,” in the first step towards an EU-wide certification plan for negative emissions. The plan is expected to help with carbon removal procedures approaching 2050.

EU leaders announced on Thursday the bloc’s new Indo-Pacific defence strategy, which stems from an agreement with the United States, Australia, and Britain. But to the surprise of many, the French nuclear-powered submarine agreement has been cut out of the deal.

And in Hungary, opposition parties are preparing to elect a single challenger to Prime Minister Viktor Orbán for next year’s elections, hoping to put an end to more than a decade of his Fidesz party’s rule.