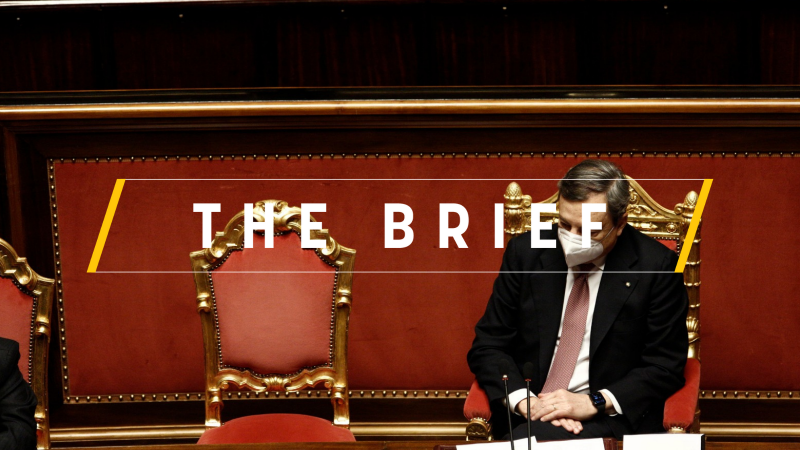 Former European Central Bank (ECB) Governor Draghi was sworn in as Italy’s PM on Saturday (13 February) and tonight, he is to receive the first of the two confidence votes needed to rule the country.

Less than a month ago, his predecessor, Giuseppe Conte, was saved by a handful of votes before eventually resigning, while Draghi is expected to be backed by one of widest majorities that a prime minister ever had in the history of Italian politics.

The composition of the Italian Parliament has not changed in the meantime, so how could Draghi have built such impressive support in such little time?

A Christological figure of Draghi is taking hold, as he’s starting to be perceived like the Chosen One who’s going to save Italy from its fiscal vices, having saved the eurozone from its greatest crisis.

But there is another metaphor from the New Testament that seems to work well in describing the current situation in Italy. It is about his ‘followers’, namely the parties that will back Italy’s new political Messiah.

At the Last Supper, Jesus told an incredulous Peter: “Before the rooster crows, you will have denied me three times.”

Likewise, even before the inauguration of the Draghi government – “before the Dragon crows,” as it were – two of the disciples have disowned what they believe in.

First, right-wing Lega has gone from being one of the most Eurosceptic parties in Italy to adopting a pro-EU stance.

“My sons are born and think as Italians in Europe. Our goal is to make Italy great again in Europe,” Lega leader Matteo Salvini said after the round of talks with Draghi last week.

This sort of European Trumpism bought the party a crucial and highly-coveted ministry of economic development, which went to Giancarlo Giorgetti, Lega’s number two and a strong supporter of it joining the centre-right European People’s Party (EPP).

The most prominent Lega politician, the anti-euro MEP Antonio Rinaldi, went even further, saying that the exit from the eurozone was academic speculation and tweeted it is a matter of pride to have in Europe banknotes bearing the name of Italy’s prime minister.

The things they are a-changing for Five Star Movement too, although we are already used to their U-turns: from the beginning of the mandate, they have ruled together with Lega, the centre-left PD and Matteo Renzi’s party Italia Viva.

But this time, they agree to form a government that includes the Movement’s arch-enemy, Silvio Berlusconi, for whom Five Star founding father, the comedian Beppe Grillo, coined the term ‘psiconano‘; psychotic dwarf.

So, the anti-establishment party ended up in a government that includes the whole establishment lead by the former leader of the ECB, an institution that Five Star activists have always linked to austerity and the notorious supervising Troika.

“I thought he was God’s banker, instead he is a grillino,” Grillo himself said, after having had a positive meeting with Draghi last week.

How to explain this?

According to political analyst Lorenzo Castellani, the Draghi government is a major operation – and a huge challenge – to pacify the Italian ruling class within a new political and economic paradigm.

But this pacification will also have to involve political parties as well, which spent half of the legislature fighting one another and creating a polarised political landscape.

The Draghi operation is also strongly desired by President Sergio Mattarella, whose mandate is about to finish.

It’s not a piece of cake. Bringing together such different backgrounds creates many challenges. But if the Draghi operation works, this will be Mattarella’s legacy: to have picked up a divided country and given it, more united, back to Italians.

“Today, unity is not an option, unity is a duty. But it is a duty guided by what I am sure unites us all: love for Italy,” Draghi said in his speech before Senators.

It’s worth a try.

The European Commission presented a strategy on how to promote reform, effectiveness and efficiency in the global multilateral system. It comes at a time when shortfalls of the EU’s geopolitical cloud have emerged.

Two Spanish nurses have come up with a way to extract an extra seventh dose from six-dose vials of the Pfizer-BioNTech COVID-19 vaccine by removing the remnants of the solution with specialised equipment.

As the so-called “global security law” opened Pandora’s box in France regarding privacy protection, the national parliament’s upper house debated last week whether the data of too many people are stored in the country’s databases for identification, administrative or surveillance purposes.