The metamorphosis of Visegrad’s populists 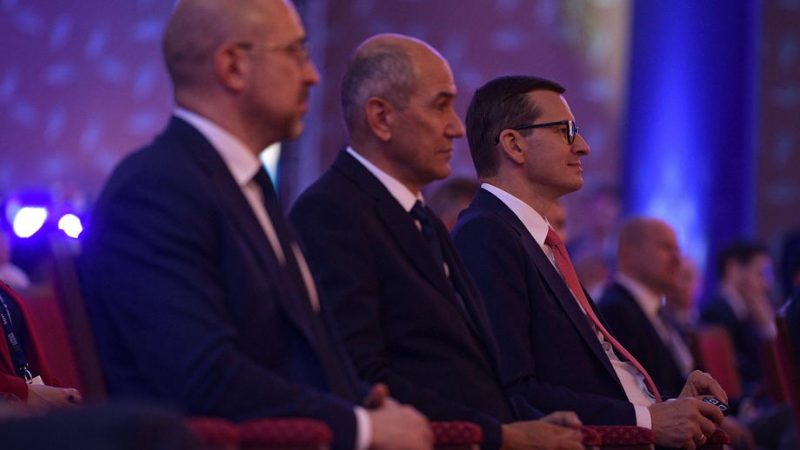 Europe’s populists in power in Poland, Hungary, and Slovenia see being migrant-friendly supporters of Ukraine as an excellent opportunity to clean their image, but the proof will be in how they defend democracy at home, writes Sam van der Staak.

Sam van der Staak is a policy expert on democratic developments in Europe. He heads the Europe Programme at the Stockholm-based think tank the International Institute for Democracy and Electoral Assistance (International IDEA)

The European Union’s strong support for Ukraine against Russia, from economic sanctions to shipments of missiles and an open-door policy towards war refugees, has signalled hopes of a democratic rebound in a troubled continent.

“During these trying times, our Europe is demonstrating remarkable unity,” French President Emmanuel Macron told his nation in March. “Now Europe must agree to pay the price of peace, freedom and democracy …. The war in Ukraine marks a turning point for our continent.”

Any democratic renaissance is indeed welcome.

Democracy has been in the doldrums for years, and creeping authoritarian tactics have become more common.

Data from the Stockholm-based think tank International IDEA shows that in many of Europe’s erstwhile communist countries, civil liberties and checks on government are now comparable with when they joined the EU.

In Hungary and Poland, democratic backsliding has intensified for years, while Slovenia joined them in 2020. These declines have created a deep and dangerous cleavage in the EU’s internal fundamental consensus on liberal democratic values.

So, the EU sanctions against Russia and the sight of the gleaming superyachts of Russian oligarchs being seized in sunny European ports went far beyond expectations, signalling a newfound unity that has surprised many observers more accustomed to recriminations and rivalry from EU nations over foreign policy.

The appeal of populists also appears to have eroded overnight. Hungarian President Viktor Orban, until recently Putin’s henchman within the EU, was forced to turn pro-Ukraine.

Slovenia’s Prime Minister Janez Janša, criticised by the EU for curtailing media and judiciary at home, has called for the toughest EU sanctions possible against Russia in defence of democracy. Macron has surged in polls after his statesmanlike role in the crisis,  to the detriment of Russia-friendly opponents on the far right and far left.

Former migration sceptics Hungary and Poland are also taking in the lion’s share of Ukrainian refugees. Hungary, which previously refused to resettle as little as 1300 asylum seekers, has sheltered a stunning 180 000 Ukrainians in the past two weeks.

But such democratic optimism may be too early to call. Elections in Hungary and Slovenia this April will be the litmus test for the endurance of populists, and the jury is still out on the resilience of European democracies.

By dropping his long-standing bromance with Putin, Orban may benefit in polls. In Slovenia, another backsliding democracy, Janez Janša was all but sure to lose his position as prime minister but is now betting that his historical references to fighting the Russian bear will lend his campaign renewed zeal.

The hospitality shown by Poland and Hungary to Ukrainian refugees may harbour darker political opportunism. Both countries now have more bargaining power following the EU’s recent decision to withhold funds for the rule of law violations, amounting to a €7 billion cut for Hungary and a €36 billion reduction for Poland. They will remind of the EU’s 2016 Turkey deal, which saw the block payout billions of euros and cast a blind eye to Erdogan’s autocratic tendencies in return for hosting thousands of refugees.

Add to that the spike in energy bills and economic stress that will follow Europe’s increased defence spending and asylum costs. Populists across Europe have already dusted off their traditional rhetoric for greater welfare and fuel support against accepting migrants.

The EU needs to step up its push to fight autocratic populists, pushing back against democratic backsliding in Hungary, Poland and Slovenia even if they hold the cards on migration. After all, the best way to counter the expansionist drive of foreign autocrats is by defending democracy at home.

Defending democracy at home also means protecting elections from disinformation and voter manipulation. Russian hacking in France’s 2017 presidential elections, Russian disinformation in the Dutch 2016 Ukraine referendum, and Russian funding of populists from Germany to Italy have hurt the credibility of elections across the continent. EU member states have traditionally been wary of joint investigations or legislation against these practices since they consider elections a purely domestic affair.

With a Russian enemy at the gates, this argument no longer holds. Now is the time to intensify joint investigations into Russian disinformation, to jointly protect elections and parliaments from foreign cyberattacks, and to harmonise rules that close loopholes for foreign funding of European politicians.

Three decades ago, the collapse of the Soviet Union sparked hopes of the permanent success of liberal democracy. These hopes to an end of history were ill-founded. The EU States should not make the same mistake again. Democracy cannot be taken for granted.