China has secured €21.7 billion of investment from European carmakers in the past year to produce electric vehicles there, according to figures compiled by T&E, based on the public announcements made by the manufacturers themselves.

This is seven times more than the €3.2 billion they invested in Europe, T&E said, putting the difference to the aggressive policies put in place by the Chinese government to promote electric vehicles.

“China’s ambitious mandate – requiring carmakers to manufacture electric vehicles in its territory – is a key driver of investment in EVs, one which Europe currently lacks,” T&E said in a statement. 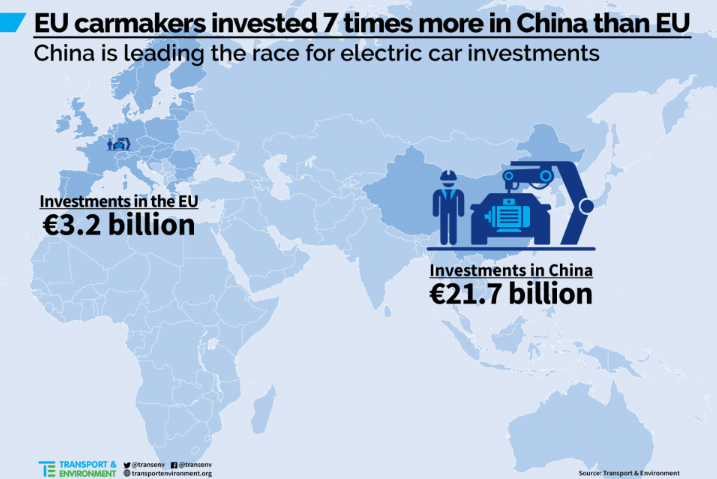 ACEA, the European car manufacturers association, did not dispute T&E’s assertion, saying the “significant investments” made in developing electric vehicles in China “is directly related to both the current size as well as the future growth potential of the market there”.

Indeed, the relatively bigger size of the Chinese market – 23.5 million vehicles manufactured in 2017, versus 17 million in Europe – cannot explain the huge disparity in investment, T&E pointed out.

“The framework conditions are very favourable to EV sales in China,” said Cara McLaughlin, ACEA’s communication director. “On the one hand, the Chinese government is responsible for setting the rules and the targets that manufacturers need to comply with. On the other, it is also responsible for setting the conditions that allow for a stronger market uptake of EVs, such as monetary and non-monetary incentives and large-scale infrastructure deployment.”

“This is not the case in the 28 EU member states, where there are still major barriers hampering EV uptake – notably affordability and recharging infrastructure availability,” McLaughlin told EURACTIV in e-mailed comments.

The most aggressive is German car giant Volkswagen, which announced an investment of €15 billion in electric and autonomous vehicles in China by 2022, part of which will be met via a new joint venture with Chinese firm Anhui Jianghuai Automobile (JAC).

Nissan has pledged €8 billion as part of a joint venture with Renault and Dongfeng, while Daimler AG teamed up with China’s BAIC in a venture worth €1.6 billion to expand the production of Mercedes-Benz EVs to a new facility in Beijing.

According to T&E, carmakers have been clear that the strong Chinese vehicle market is the driver of their investments. But the obligation for foreign investors to set up joint ventures with Chinese manufacturers might also have helped.

“The fact that investments are shared proportionally between JV partners would be a contributing factor to encourage European manufacturers to invest in China,” McLaughlin said.

Over time, Europe could lose further auto manufacturing jobs to China. But the trend can still be reversed, T&E said, pointing to a recent study by Cambridge Econometrics – endorsed by BMW, Renault-Nissan, Valeo, ABB, trade unions, consumer group BEUC and green NGOs – which concluded that 206,000 net jobs could  be created in the EU through a shift to clean vehicles.

“The Chinese have a headstart because of their ambitious zero-emission vehicle mandate,” said Julia Hildermeier, electromobility officer at T&E.

“Europe can catch up quickly too. The European Parliament and EU governments can do so by setting a binding 20% CO2 reduction target for 2025, coupled with an EV sales target.”

EU lawmakers can expect backing from The Netherlands, which is pushing aggressively for stricter emissions standards from cars. Governments in France, Spain and Italy, have also signalled support for stricter CO2 standards and openness to an electric vehicle mandate.

But German automakers have led the resistance and killed a draft mandate for zero-emission vehicles just before the European Commission tabled its proposal on cars’ CO2 standards last November.