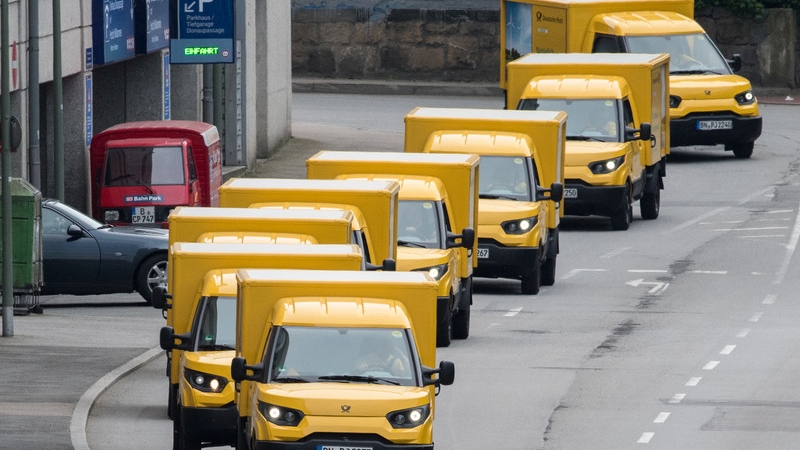 A fleet of electric powered cars of the German mail service (Deutsche Post) drives along a street in Paussau, Germany. [EPA/ARMIN WEIGEL]

With almost two out of three new cars in Europe bought for corporate purposes, companies have the power to shape the direction of the market, according to a new report due to be published next week (17 February).

Private companies are increasingly shifting to electric vehicles to boost their reputation among climate-concerned customers and cut costs in the long run, according to EV100, an initiative of the Climate Group.

“Companies realise that customers want to deal with brands that are conscious [of climate change],” said Sandra Roling, the leader of EV100.

EV100 is a global initiative that commits participating companies to electrify their fleet operations by 2030. More than 100 businesses have committed to the initiative, including major companies such as GlaxoSmithKline, Siemens, and Unilever.

As fleets are upgraded on a regular basis – every two to six years on average – Roling believes companies can create a viable second-hand electric vehicle market and bring down the upfront purchase cost for consumers, which is a major barrier to uptake.

Companies are also well placed to take on electric vehicles as they have the means to trial going electric before scaling up, says Roling.

“Companies have more resources [than private consumers] to look into these things. When a company is thinking about transitioning its fleet, they might get a consultancy in who will track where vehicles are going, how far they are going, whether they work within the typical ranges,” she explained.

“Everyone thinks they need a few hundred miles of range to be comfortable, but most people only drive 30 to 40, maybe 50 kilometres in a day. Understanding that is easier for companies, because they are able to analyse the use of the vehicles professionally,” she added.

One major obstacle to uptake, the higher upfront purchase cost of electric vehicles, is offset over the lifetime of the car, particularly through lower fuel costs, said Roling. In addition, it is predicted that the price of many electric vehicle models will reach equal footing with their fossil fuel counterparts next year.

The US ride-share company Lyft reported that drivers trialling electric vehicles reduced their fuel costs by an average of 50 to 70 US dollars per week. By 2030, the company expects drivers across its two million-strong fleet to have saved around $10 billion in operating costs.

So far, no EV100 company that has trialled electric vehicles has decided to return to fossil fuels. In addition to savings, employees mention that the driving experience is more comfortable, as the vehicles are quieter and do not vibrate. Roling says these employees tend to convince sceptical colleagues that electric vehicles are acceptable.

Saul Lopez, e-mobility manager at green NGO Transport & Environment, praised EV100 as “an excellent voluntary initiative” but warned that “private initiatives should be complemented by EU policies to accelerate the transition by requiring all fleets to go zero emissions by 2030.”

Concerns persist, however, about long-distance journeys. According to Roling, this can be solved through the rollout of charging infrastructure in a coherent way, ensuring harmonisation and accessibility.

“It’s important to make sure that charging infrastructure is easily available and that we build already the infrastructure for the need that we are expecting,” she said.

The EU is targeting the rollout of one million charging points across Europe by 2025 and three million by 2030. This figure has been criticised as insufficient by T&E and the European Automobile Manufacturers’ Association (ACEA), who published a joint letter on Thursday (11 February) calling on the European Commission to push forward the one million charging point target to 2024.

The success of the transition to electric vehicles is “seriously threatened by the delayed installation of charging infrastructure in the EU,” according to Oliver Zipse, ACEA president and CEO of BMW.

“The EU Commission quickly needs to take action and set binding targets for the ramp-up of charging infrastructure in the member states. Otherwise, even the current reduction targets in fighting climate change are at risk,” he said in a statement.

The diversity of electric vehicles still lags internal combustion engine cars, and the lack of bespoke vehicles for specific business needs is hampering wider uptake. “We still need more [electric vehicles] and we need them faster as well. We need to encourage manufacturers to create that supply,” says Roling.

Unable to find the right electric van for deliveries, furniture giant IKEA worked directly with manufacturers Renault and MAN to create a vehicle tailored to the company’s needs.

Following tests in Paris, Amsterdam, Los Angeles, New York, and Shanghai, the Swedish company is committing to going 100% electric by 2025.

Regulations, such as the EU’s strict CO2 standards, have played an important role in encouraging manufacturers to increase the share of electric vehicles in their portfolios, Roling believes.

“We need to further align the trajectory of those standards with where we ultimately need to go. If the EU wants to get to net zero emissions by 2050, it means we need all new cars and vans to be electric across Europe at the very latest by 2035,” Roling said.

EURACTIV asked ACEA to comment on the feasibility of halting production of internal combustion engine cars in favour of electric vehicles by 2035, but has not received a response.