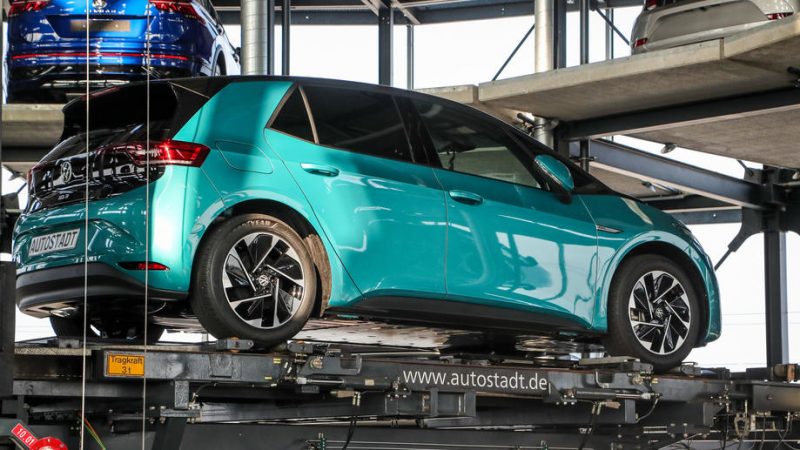 A Volkswagen ID.3 electric car sits inside one of the car towers at the Volkswagen manufacturing plant in Wolfsburg, Germany, 26 March 2021. [EPA-EFE/FOCKE STRANGMANN]

The new rules will result in the bloc deepening its shift to electric vehicles, with the European Commission expecting “almost 100%” of cars on the roads in 2050 to be emissions free.

The announcement came as the EU executive released a package of climate and energy laws, which aims to reduce the bloc’s greenhouse gas emissions by 55% by 2030, and set a path for achieving net zero by 2050.

“Transport is today the source of 29% of the EU total greenhouse gas emissions. By 2050 we need to cut it by 90%,” said Adina Vălean, the EU’s transport commissioner.

“A combination of measures is required to tackle rising emissions in road transport,” the European Commission said in a statement, adding that “stronger CO2 emissions standards for cars and vans will accelerate the transition to zero-emission mobility”.

Warding off potential criticism from the industry, a senior EU official said the move is in line with the principle of technology neutrality: were an emission-free ICE vehicle created, it would be permitted under the rules, the official said.

Incentives for zero and low-emission vehicles

Incentives for zero and low-emission vehicles will be phased out in 2030, with the EU executive reasoning that the clean vehicles will no longer be competing with petrol and diesel engines, removing the need for government support.

At present, manufacturers that produce between 1,000 and 10,000 passenger cars or between 1,000 and 22,000 light commercial vehicles can apply for a derogation from emissions targets – the European Commission has proposed that this cease to apply from 2030 onwards.

Small-scale manufacturers that produce fewer than a thousand vehicles per year will, however, be exempt from the zero-emission requirements.

To ensure sufficient progress is being made, a report will be produced every two years, with the EU executive reserving the right to introduce new measures it it finds that the targets are in danger of being missed. A full review will be carried out in 2028 – roughly the midway point from now until the ban on the sale of polluting vehicles.

Europe’s auto industry behemoths are widely expected to handle the transition to electric vehicles, with many of them already restructuring the production to e-mobility. However, smaller manufacturers and parts manufacturers are likely to be worst affected by the coming transition.

“For the car industry, I don’t think this is a huge problem,” said Peter Liese, a German Christian Democrat lawmaker who is a key ally of Chancellor Angela Merkel in the European Parliament. “But we also have thousands of SMEs that produce parts of the combustion engine. And for them, 2035 is quite soon and they will be challenged by that.”

The Commission said it will provide “upskilling and retraining possibilities” for those likely to be left jobless by the downturn in industries connected to manufacturing internal combustion engines.

How clean are electric vehicles?

The announcement will put a renewed focus on the sustainability of battery-powered electric vehicles, which have been given a major boost by today’s announcement.

Speaking to journalists, Peter Liese said the centre-right EPP group in the European Parliament was “very concerned” about the way in which the European Commission is planning to measuring car emissions.

“Electric vehicles are not really carbon neutral – even though they are the best in my view to reduce emissions in road transport – because the electricity is not carbon neutral,” he said at a press briefing on Wednesday.

“We are still convinced at the EPP that we need also some alternatives, especially for lorries and other niche markets where electricity will probably not do the job. So we push the Commission for a more open technological approach.”

Liese criticised the choice of 2035 for the vehicle emissions ban, arguing that it does not provide sufficient time for small businesses whose livelihoods depend on internal combustion engine production to adapt.

But clean mobility NGO Transport & Environment welcomed the announcement, calling for the switch to clean vehicles to happen prior to the EU’s deadline.

“This is a turning point for the auto industry and good news for drivers. The new EU rules will democratise electric cars and give a major boost to charging, meaning clean cars will soon be affordable and easy to charge for millions of Europeans,” said William Todts, executive director of Transport & Environment (T&E).

The new regulation on car’s CO2 emissions is part of a broader package of energy and climate laws that is aimed at reducing the bloc’s emissions by 55% by 2030.

Much of the new legislation is aimed at the transport sector, a sector Europe has struggled to decarbonise until now.

For many transport companies, the green rules will fundamentally alter their business operations, forcing them to pivot towards cleaner technology and fuels.

To facilitate the roll out of zero-emission vehicles, the Commission aims to push up the number of charging and fuelling points along major highways. The EU executive set a target to install an electric charging point every 60 kilometres, with a hydrogen refuelling station every 150 kilometres.

In the field of aviation, EU transport commissioner Adina Vălean confirmed that the EU will impose a green jet fuel mandate on all flights refuelling at EU airports, with kerosene required to include a blend of at least 5% sustainable aviation fuel by 2030.

In the shipping sector, the FuelEU Maritime regulation aims to boost the uptake of sustainable maritime fuels. The regulation sets a limit on the greenhouse gas content of the energy used by ships that land at European ports.