The leaders of Estonia, Latvia, Lithuania, Poland and the European Commission all signed up to a political agreement during a special ceremony on the sidelines of the ongoing European Council summit.

According to the roadmap, the deadline for concluding the synchronisation of the Baltic grid is set for 2025, using an existing electricity interconnector between Poland and Lithuania, as well as a planned undersea cable.

The latter project will only be undertaken if the results of a study by the European Network of Transmission System Operators (ENTSO-E) show that it guarantees energy security, security of supply and if its costs are within reason. Results are due in September.

Commission chief Jean-Claude Juncker said that “since the beginning of our mandate, my Commission has been committed to having full integration of the Baltic states’ grids with the rest of Europe”.

Energy Union boss Maroš Šefčovič called the deal “solidarity at its best“, adding that the project will “cost us a lot from the European budget”, through the Connecting Europe Facility.

Poland’s role in the preliminary deal is crucial as it will act as the primary link between the Baltics and the rest of Europe. In March, the three countries revealed they would not support any EU sanctions against Warsaw as part of the ongoing rule of law spat with Brussels. 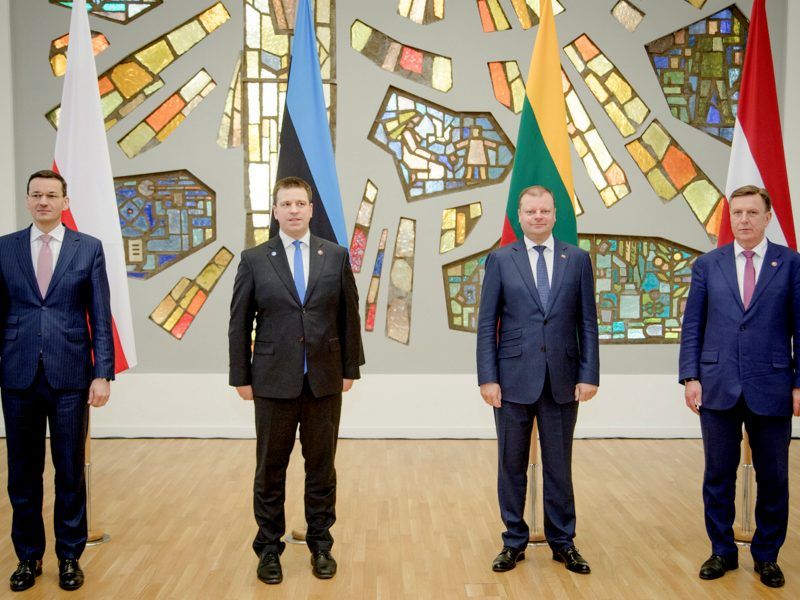 Thursday’s agreement was long overdue, after disputes about how best to cut ties with the Russian-Belorussian network stood in the way of any progress.

Estonia and Latvia initially both favoured setting up a second alternating current (AC) connection with Poland to complement the existing LitPol link but Lithuania and Poland did not support that idea, despite studies showing that two AC connections would be best.

Estonia had also suggested synchronising via the Nordic nations.

Instead, Estonia and Latvia agreed to an undersea direct current (DC) link between Lithuania and Poland, provided the results of the ENTSO-E study are acceptable.

All three Baltic countries are still synched with the Soviet-era BRELL energy network and remain dependent on that system, despite over a decade of EU membership.

Desynchronisation has become an important political issue for the countries’ leaders and earlier this month, Estonian PM Juri Ratas said that “separation of our electricity system from Russia and its integration into Europe will increase our security”.

But the chairman of the Estonian Academy of Sciences, Arvi Hamburg, told Finnish media that the plans are “a political project” and warned that taxpayers will incur additional costs with very little gain.

Indeed, Estonia is the least reliant on energy imports of any EU country and is already selling its surplus energy statistics to the highest bidder, whereas Latvia and Lithuania both bring in over 50% of their power needs.

Desynchronisation is particularly pressing for Lithuania, which has long objected to an under-construction nuclear power plant on its border with Belarus and which President Dalia Grybauskaitė last year called a “Russian geopolitical project”.

Russia’s state-owned atomic energy company is building the Ostrovets facility within 50km of Lithuania’s capital, Vilnius, and the Baltic nation has repeatedly claimed that Belarus has ignored international safety standards. Minsk insists it has followed all protocols correctly.

Belarus hopes that the plant, which is due to start coming online next year, will help cut its reliance on Russian gas (currently around 95% annually), although it will exchange that particular dependence for an exclusive nuclear fuel contract with Moscow.

In addition to desynchronisation, Vilnius hopes that a 2017 law banning the purchase of Belarus energy and a Baltic-wide tax on imports will help mitigate the plant’s impact on its energy system.