Polish President Andrzej Duda (C) visits the control room of the nuclear reactor 'MARIA' during his visit to the National Centre for Nuclear Research in Otwock-Swierk, near Warsaw, Poland, 08 March 2016. 'MARIA' is the only active nuclear reactor in Poland. [EPA/LESZEK SZYMANSKI]

Poland has big ambitions when it comes to wind power in the Baltic Sea. “We are primarily betting on offshore,” said Henryk Baranowski, CEO of Polska Grupa Energetyczna (PGE), a state-owned public power company.

“We want to have around 3 GW in offshore wind farms by 2030,” Baranowski told EURACTIV on the sidelines of the Polish electricity industry association’s summer event, organised in Brussels on Wednesday (10 July).

But even those plans won’t be sufficient to decarbonise Poland’s entire power sector. 76% of the country’s electricity still relies on coal, which is the most carbon-intensive form of power generation.

Hard coal and lignite power plants were first installed in the 1960s and 1970s and need to be replaced, said Baranowski, who is also the chief executive of PKEE, the Polish electricity industry association.

“We can say they are obsolete,” he told EURACTIV. “So we have to find other energy sources to replace them just to achieve our main goal of security of supply”.

Gas plants in the pipeline

That process is likely to take decades, however. And while offshore wind will play an important part in displacing coal, other sources of energy are also required to fill the gap.

“Of course, they cannot switch everything to renewables,” said Christian Egenhofer, a senior research fellow at the Centre for European Policy Studies in Brussels. “If you want to have this [energy] transition, you need everything, including natural gas,” he told EURACTIV in a recent interview.

After energy diversification, Warsaw’s second priority is to develop its electricity grid, Egenhofer said. “And that tells you where they’re heading – it’s very much consistent with their planned development of offshore wind,” he said.

In June, PGE made a decision to build two gas-fired power units of 700 MW each. Those will be located in Northern Poland, close to the Baltic, where they will act as back-up to offshore wind farms.

“That’s why we decided to have modern, state-of-the-art gas-fired power plants located close to our offshore installations,” Baranowski said.

Gas-fired electricity is starting to play a bigger role in Poland’s coal-dominated power sector as the country seeks to lower its carbon emissions. Gas-fired plants accounted for 8% of the country’s total generation this year, up from 6% a year ago, according to S&P Global Platts, a provider of energy and commodities information.

A new gas pipeline linking up Poland and Norway and increased imports of liquefied natural gas from the US are also part of Warsaw’s push for greater energy independence and diversification from coal. 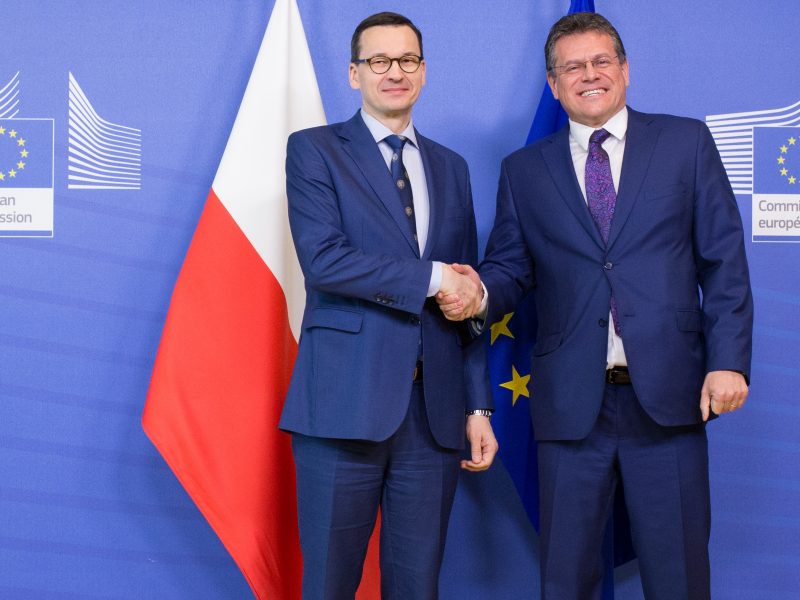 But Poland won’t stop there and is also firming up plans for nuclear power stations to fill the gap opened by the gradual closure of it ageing coal fleet.

Warsaw expects its first nuclear power station to start operating in 2033, the Polish energy ministry indicated in a draft energy strategy published in November last year. A total of 6-9 GW of nuclear power is expected to be installed by 2043, the ministry added, for an estimated cost of €4.66 million per MW.

Under government plans, new units would follow every two years, gradually replacing coal-fired generation as they come online, the Polish energy ministry indicated, forecasting the completion of the first of six 1-1.5 GW units in 2033.

“We have to have baseload electricity” and diversified energy sources in order to meet carbon reduction goals, Baranowski said. “That’s why we are trying to find different kinds of fuels,” he told EURACTIV, adding: “It doesn’t matter if it’s sun, wind or nuclear.”

“According to government plans, we would have at least 2-3 GW of nuclear by the mid-2030s,” Baranowski said. By then, nuclear reactors would be “installed, ready to go and producing electrical energy,” he assured.

One option is to install “small modular reactors,” the Polish CEO explained, saying small units could be “a good solution” for Poland. However, it is still “too early” to say whether European suppliers will be favoured over foreign ones, he added, saying “all options are on the table.”

There are strong signs that Poland’s new nuclear fleet could come from the US, however. In June, Polish Secretary of State Piotr Naimski signed a memorandum of understanding with US Energy Secretary Rick Perry on cooperation in civilian use of nuclear energy.

Polish Secretary of State Piotr #Naimski and US Energy Secretary @SecretaryPerry signed a MoU on cooperation in civilian use of nuclear energy, a concrete step implementing the Strategic Dialogue on Energy between Poland and the US. pic.twitter.com/rGC9hjPupV

The move was presented as “a concrete step” in the ‘strategic dialogue on energy’ between Poland and the US, initiated in December 2018 by presidents Andrej Duda and Donald Trump.

Finance appears as the main outstanding issue. “I can say one thing – the financing model should be based on capital and not debt,” Naimski said after meeting with Perry last December.