Investors in the Ostrołęka C coal-fired power plant – often branded as Poland’s last – could lose €1.7 billion, according to the report released on Wednesday (29 August).

The Ostrołęka C project is part of the Polish government’s plan to ensure the country’s energy security. It is presented as a necessary supplement for renewable energies that will partly replace a number of old inefficient coal power plants that are due to be taken offline by 2020.

But the project is highly dependent on state support for fossil fuels, which is currently being phased out at EU level in an effort to cut air pollution and curb emissions of global warming gases.

A reform of so-called “capacity mechanisms” under consideration in Europe would exclude state aid for plants emitting more than 550g of CO2 per kilowatt hour – a  move that would de facto rule out government support for coal as well as some inefficient gas power plants.

“This could well be the last coal plant constructed in Poland and if it gets built, it is destined to be a financial and economic disaster,” said Matthew Gray, a senior analyst at Carbon Tracker.

“Assuming no capacity market payments, if Ostrołęka C is built and not closed prematurely it could generate a negative Net Present Value of €1.7bn,” he added.

Details of the capacity market reform are still being discussed by EU legislators, with a final agreement expected in November or December this year. Poland has already softened the impact of the reform by winning a number of adjustments to the timeline for phasing out state aid during preliminary talks with other EU member states in December last year.

However, the final EU measures are still to be decided and could still bite. “Under the terms of the provision currently being negotiated, even if these capacity payments are not prohibited, they could be reduced each year from 2025 – and potentially terminated in 2030,” Carbon Tracker said. And stricter measures might still be adopted in the end, it added.

Ostrołęka C is a joint venture between two Polish state-controlled companies, Energa SA and Enea SA. Construction suffered a four-year delay when the management board of Energa suspended the start of the works in 2012, citing financing difficulties. The project was revived in 2016 when a new board meeting repealed the decision and announced plans to seek a strategic investor or co-investor to ease the financial burden.

In a statement released in May 2016, Energa acknowledged that Ostrołęka C “will require the existence of legal and systemic mechanisms” to support “new investments in the conventional power sector.” This will involve “creating a well-run capacity market in Poland,” it added.

But capacity payments beyond 2030 are extremely uncertain, Gray pointed out, saying this is expected to chip away at the plant’s long-run profitability. “On a long-run marginal cost basis, Ostrołęka C will likely be one of the most expensive plants,” he said, pointing out that the planned coal power plant will get the same 15-year price as the 1-year price of existing capacity. 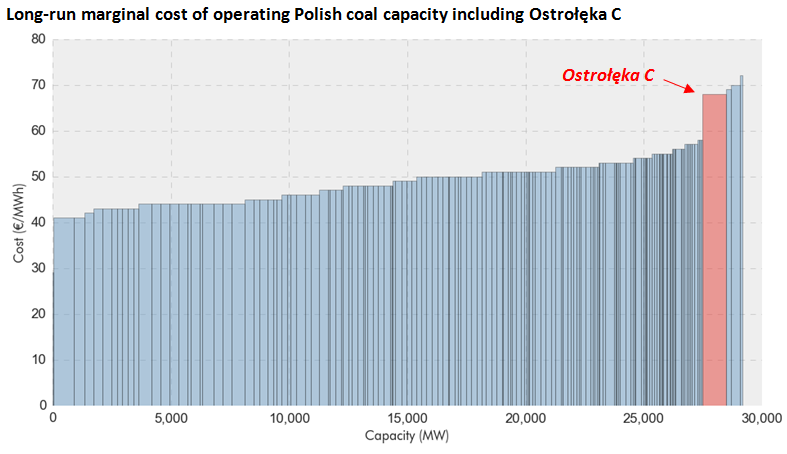 Poland’s last coal power plant has become a recurrent headache for Energa. The company has called a management board meeting for 3 September where the sole question on the agenda is whether a shareholder vote should be held on commencing construction of Ostrołęka C.

The meeting will take place amid high turnover at the Polish state-owned company. Acting President Alicja Barbara Klimiuk is Energa’s sixth president in two years and ninth president in 40 months, Carbon Tracker said, pointing to media speculation that this is due to concerns about Ostrołęka C’s economic viability.

Adama Kasprzyka, a spokesperson for the Energa Group, admitted that the capacity market is “a significant factor in our cash flow forecasts” but added that the company expected “the majority of the value” to be generated through the electricity market.

“Contrary to the findings of the report, we do not believe the scenario of Ostrołęka C burning cash without capacity payment (i.e. gross margin not sufficient to cover fixed costs) is possible,” Kasprzyka told EURACTIV in e-mailed comments.

A Polish auction for capacity schemes is scheduled later this year, before the proposed electricity market regulation takes effect, Kasprzyka indicated, saying: “We assume that rights acquired through concluded capacity contracts will be respected throughout the 15 year period.”

“Therefore, we assume that the capacity payments will constitute a stable cash flow for the auction winners,” Kasprzyka said.

The spokesperson did acknowledge that Ostrołęka C “will have a higher marginal cost of capacity compared to existing power plants”. But the plant’s increased efficiency “allows it to successfully compete in the auction,” Kasprzyka said.