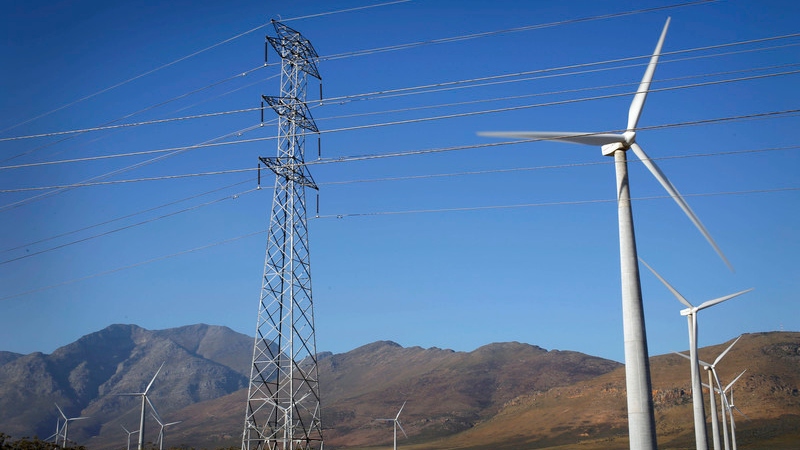 Some of the 46 wind turbines at the Gouda wind farm in South Africa. The wind-farm can power 200,000 households every year. [Kim Ludbrook / EPA-EFE]

Creating a single electricty market across Africa is an immmense task, but will mean cheaper, reliable and renewable electricity, increasing the number of people who have access to power, writes Johan van den Berg.

Johan van den Berg heads the secretariat of the Africa-EU Energy Partnership (AEEP). Established in 2007, the Partnership facilitates the achievement of universal access to affordable, sustainable and modern energy in Africa.

As the international community gears up for the first global gathering on energy on the auspices of the UN General Assembly in four decades this month, energy and sustainability in Africa is high on the continental agenda.

Simultaneously focused to “build back better” out of the COVID crisis and towards lasting societal sustainability, Africa has shown its intent by launching the largest single electricity market on the globe.

The vision is long-term, ambitious and compelling and will build on and expand what only Europe has approached at continental scale so far. It will lower electricity costs, speed up universal access for those who await it and spur economic growth through making the productive use of electricity affordable.

Positive side-effects will be promoting regional integration, fostering peace and stability and strengthening the international order.

The logic and significance of this bold initiative is best contextualised by placing it within paradigm-altering international agreements of the previous decade.

When signing the Paris Agreement and embracing the Sustainable Development Goals in 2015, the international community chose a future of energy abundance and climate stability, based on renewable energy.

The goal is clear, the technology exists and is highly affordable. The challenge is to radically transform our global power system in the next three decades. In electricity, we know that solar and wind power will anchor the future.

The variability of these sources (occasional cloudy and less windy days in some places) means that electricity systems need to be designed to deal with fluctuations while powering modern economies.

In Africa, the need already has a human face – the cheapest electricity possible is needed to enable universal access for the many millions who do not have it.

The stability of an electricity grid based on variable renewable energy is achieved firstly by stretching the system over the largest geographical area possible. The sun always shines and the wind always blows, somewhere, and thus variability statistically becomes far lower.

Power plants can be built where resources are most favourable, leveraging the unique endowments of different countries and regions. It also “lengthens the day” for solar power – mainland Africa, 7,400km wide, has time zones three hours apart.

The second intervention towards system stability is to couple demand flexibility with energy storage. Large landmasses need to be interconnected with transmission lines and require a single electricity market across the domain.

This in turn implies profound political collaboration of countries within the electricity domain and significant benefits in sharing experiences and learnings with other domains.

Our sustainable future is a politically interdependent and integrated one. In Africa, this multilateralism will foster universal access as soon as possible by making electricity as cheap as possible.

Europe was the first continent to attempt and now approach a single electricity market. Work commenced in 1996, showed the halting progress of pioneering work and took 25 years to reach the present level of integration.

From national electricity systems somewhat integrated and controlled by monopolist utilities, Europe has migrated to an open, competitive system much better connected and integrated, and using significant amounts of renewable energy.

Along the way, priceless lessons were learnt. Simultaneously, political partnership with Africa was institutionalised, also on energy. In 2007, Africa and Europe entered the Africa-EU Energy Partnership.

Political dialogue is the central feature of the working relationship that is now deeply established and sees continuous exchange between the Africa Union Commission and the European Commission.

With the launch of the African single electricity market (AfSEM), the energy partnership between Africa and Europe has leveraged the lessons learnt in Europe and applied them in Africa through the work of the EU Technical Assistance Facility, instrumental since 2015.

The AfSEM was officially launched on February 7, 2021, by African Heads of State and Government, during the 34th Ordinary Session of the African Union (AU) Assembly. It envisions an electricity market covering the African Union’s 55 member states, and a population of more than 1.3 billion that is growing.

Structured along phases from harmonising regulatory frameworks to integrating generation, transmission and distribution masterplans, the market is anticipated to reach full operation by 2040.

The task is immense, and like in Europe, unlikely to progress smoothly, easily or quickly. At this time, however, the acid test of policy is whether it embraces and embeds a full recognition of the future we are heading into. Many enticing avenues are closed off by the demands of sustainability.

The road to sustainability is narrow and requires vision and courage. In these respects, the launch of the Africa Single Electricity Market is already a success.