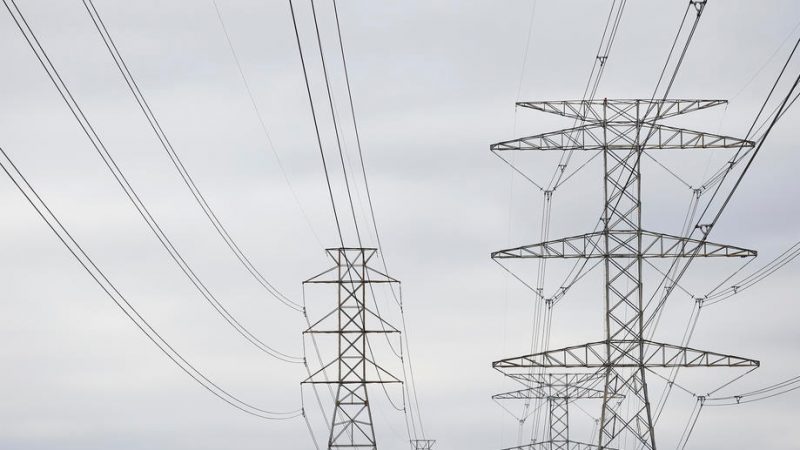 Power lines in Houston, Texas, 18 February 2021. A winter storm has brought historic cold weather across the United States, knocking out power for over a million people in Texas. [AARON M. SPRECHER / EPA-EFE]

The unprecedented winter storm in Texas that left over a million people without heating has been seized upon for political gain, but there are lessons that Europe can learn from this, writes Michael Hogan.

Michael Hogan is a senior advisor at the Regulatory Assistance Project, an independent organisation promoting the transition to clean energy.

Othello: “But this denoted a foregone conclusion.”
Iago: “Tis a shrewd doubt, though it be but a dream
And this may help to thicken other proofs
That do demonstrate thinly.”
– Othello, Act 3, Scene 3

Shakespeare’s tragedy centres on the theme of conclusions hastily arrived at, reflecting prior suspicions but unsupported by the available evidence. That same theme runs through much of the last week of snap judgments about the dire events in Texas and their implications for EU power sector reliability and decarbonisation.

Headlines such as this, this, this and this make it clear that, while Texas may seem far away, this episode has been aggressively seized upon across Europe, rightly or wrongly, as fodder for multiple European narratives.

We have hesitated until now to join the fray, awaiting at least some minimal level of reliable information from reliable sources before offering diagnoses and recommendations. This has been a traumatic event for many people, and there has been an unseemly rush in some cases to leverage it for political gain. Yet while it remains early days, some things have become clear.

There have been some excellent fact-based analyses released over the past few days (three of the best are here, here and here), and we do not need to cover the same ground other than to highlight the most salient facts.

How extreme was the need for resources?

First, last week’s storms in the central regions of North America were of historic dimensions. For example, between 11 and 16 February, 50 locations across 11 Midwestern states saw the lowest temperatures ever recorded.

While we must recognise the strong probability that extreme weather events such as this are likely to be more frequent worldwide, this was a freak storm by any objective standard.

Before examining what should have been done better, it is worth reminding ourselves that widespread, long-lasting power system emergencies with staggering consequences have been recorded multiple times just in the past 25 years, including in Europe.

Many of these disasters proceeded from weather events that were more historically predictable than the one that hit the Midwest of the U.S. last week.

Texas electricity demand during the storm peaked on the 14th and 15th at about 74GW, versus a normal February peak of about 55GW, a difference greater than total peak demand in the Netherlands in 2020.

74GW is unheard of in winter (the Texas system operator ERCOT’s “extreme” planning scenario assumed 67.2GW, based on the last severe event in February 2011), but it is typical of recent summer peaks, which ERCOT has served reliably for many years.

Actual conditions would have called for some amount of rotating service interruptions, which should be expected for an event of this historical rarity. Unfortunately, much of that planned capacity failed to show up.

The failure of generating capacity is perhaps the most visible and yet most misrepresented aspect of the catastrophe, with many European politicians rushing to pin the blame for the blackouts on Texas’s significant investment in wind power.

The relevant baseline is the resource plan ERCOT had in place for severe winter weather. Wind capacity constituted only a small share of the plan (6GW, or about 7%) and, while some frozen wind turbines were an issue, the shortfall against plan was only about 2GW on average, and wind generation exceeded the “low wind” contingency case in all but a few hours.

This was overwhelmingly a story of the failure of supposedly reliable thermal generation, most of it gas-fired. ERCOT’s resource plan included about 70GW of thermal generation (57.7GW in their “high forced outage” planning case); on the 15th only about 42GW were available.

Coal generation was at 60% of planned capacity. One of the state’s four nuclear power trains tripped offline hours into the event, probably due to inadequate freeze protection, and did not return to full capacity until the event was largely over. Gas plants made up 55GW of planned resources, but only 31GW were available on the 15th, representing 80% of the resource shortfall.

It remains to be determined how much of the gas generation unavailability was due to plant freeze-ups and how much to fuel supply issues, but frozen gas infrastructure was a major factor.

Gulf Coast and West Texas wells, pipelines and gas processing facilities, the sole fuel source for most of the 53% of ERCOT resources that are gas-fired, are unprepared for such conditions, lightly regulated and beyond the authority of either ERCOT or the Texas utility regulator.

As analysts from the International Energy Agency noted immediately after the event, “Texas has a power shortage because Texas has a gas shortage”.

What are the implications?

Beyond the well-documented human misery endured by many in and beyond Texas, there has also been a seismic financial impact. Reports of some individuals facing incredible bills have been common, but the vast majority of Texas consumers will have been hedged by their suppliers.

The toll among suppliers, as a result, is likely to be catastrophic, with few expected to survive and with adverse longer-term consequences for all consumers.

What lessons must be learned? Certainly not that the problem was the lack of a capacity market. Perhaps the best known of the U.S. capacity markets, in the PJM market, experienced a nearly identical failure of supposedly firm fossil generating capacity during a severe winter storm in 2014, largely for the same reason – a failure to properly account for the vulnerability of generator fuel supply chains.

ERCOT’s installed reserve margin has been sufficient to reliably serve comparable summer demand peaks year in and year out. Building yet more fossil generating plant with the same vulnerability to the region’s fuel supply chain would have been of virtually no help.

Certainly not that “renewables were the problem” – the variability of wind is well understood and had been planned for, and we know how to plan for it in the future. Here are some emerging recommendations of relevance to European policymakers:

It is our hope that, as we digest and act upon lessons from this tragic episode, we strive not “to thicken other proofs that do demonstrate thinly.”