Trust, not control: Germany, EVs and the power of consumer choice 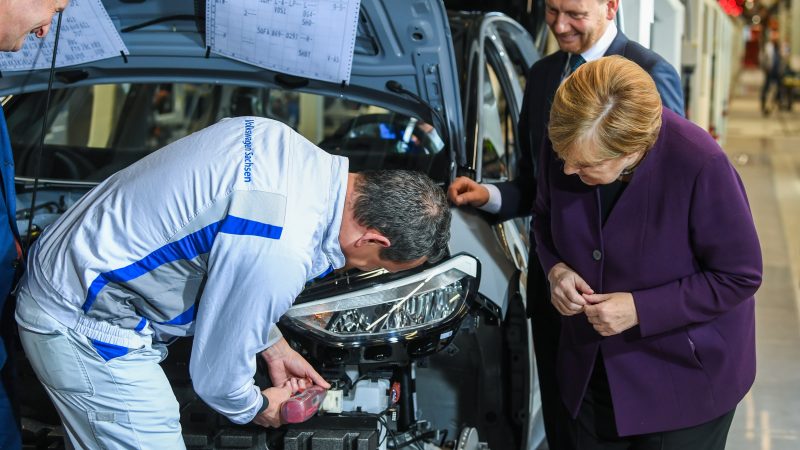 German Chancellor Angela Merkel (R) looks at the production process of a worker next to Volkswagen (VW) CEO Herbert Diess (L) and Saxony State Premier Michael Kretschmer (3-L) as she attends the start of the production of the new electric car Volkswagen ID.3 at the carmaker's vehicle factory in Zwickau, Germany, 04 November 2019. [EPA-EFE/FILIP SINGER]

‘How electric vehicles endanger electricity supply’ rang the alarm in a major German newspaper in 2018. The author warned that the local electricity networks would collapse if people returned from work in the evening and all charged their cars at the same time, a fear that kept many network operators up at night.

The government that, eight years prior, had set the target of 1 million electric vehicles on the road by 2020 had to respond.

The policy makers considered various solutions: Would upgrading the network to accommodate simultaneous charging of millions of electric cars be the best solution? Or could charging be controlled in such a way that households do not all charge at once and, if so, how?

What follows is a cautionary tale, demonstrating the importance of consumer choice and long-term power system efficiency in the transition to clean energy and transport.

After a process spanning several years, the ministry presented a new draft regulation: the dispatchable appliances law. It contained two fundamental changes to how networks are run – an approach that network operator associations had promoted as early as 2017.

The higher the uninterruptible share, the higher a household’s required contribution to electricity network costs. Consumers would be forced to choose between unpredictable interruptions or much higher network fees.

The second major change proposed concerned the ‘interruptible’ share of electricity consumption: Consumers would hand over control of their flexible appliances, such as EV chargers and heat pumps, to the network operators during pre-determined hours of the day.

The network companies would then be allowed to curtail electricity demand as needed to manage the network. Consumers who did not relinquish this control would face much higher network fees.

Grid operators welcomed this proposal, which gave them full control to curtail consumer demand for electricity.

The leading consumer associations, however, swiftly opposed the proposals due to the onus they placed on consumers to declare the interruptible portion of their network capacity, the limitations to consumer choice, and the price increases if customers did not agree to curtailment.

Moreover, if consumers gave up control over their appliances, they would not be able to reap the financial benefits of other flexibility offerings at these times, such as time-of-use energy prices or demand-response programs. These retail energy services could also help balance the national grid and better integrate renewable energy.

Innovative retailers and the car industry sided with the consumer associations. German automakers, having finally embraced the rising demand for electric cars, opposed the new regulation because they felt it would make EVs less attractive. Following an intervention by the German Association of the Automotive Industry, the government withdrew the draft law.

If the law had taken effect, Germany would have created a system that would have effectively limited further innovation.

Network operators would have informed consumers of the set blocks of time when they would have curtailed energy use and, if that did not sufficiently lower the system peak, the network companies would have had the green light to invest in more system infrastructure.

More effective and less costly so-called non-wires solutions, such as time-of-use tariffs and residential demand response, would have no longer been considered and the network operator would have retained full control. This approach reflects a well-known German saying, “trust is good, control is better.”

From a system perspective, the draft law would have failed to incentivise innovation and efficient use of the existing infrastructure, measures effective at lowering costs. Indeed, the regulation would have led to exactly the opposite result – higher costs for all consumers in the long term.

So, without the law proposed by the ministry, will the networks collapse as a result of EVs? Field trials in Germany, which simulated a high share of EV home charging, indicate otherwise. Experience shows that actively engaging with stakeholders, especially consumers, delivers a better outcome with a higher chance of success.

There are many useful examples from other regions, including the UK and EU, that demonstrate the need for transparency when designing and implementing network regulations to manage EV charging. Germany, being the only country in the EU where the ministry sets the calculation methods for network tariffs, can learn from these processes.

In September, a new Federal Parliament will be elected, and with it a new government. Will the new lawmakers learn from the past and from other regions and favour efficient solutions for consumers? In other words, will they trust consumers to make the right choices regarding their energy use or will they stick with ‘trust is good, control is better’?

Treating consumers as partners, not controllable assets, can help the network operator grow into a cost-conscious service provider within an energy transition where the consumer can freely decide about their electricity usage and pay only for the costs directly incurred as a result.

‘Trust, not control’ will hopefully now ring beyond Germany and across Europe.