The EU auditors pointed out how the current system risks penalising electrified rail in favour of air travel. [Photo: Shutterstock]

The EU’s Emissions Trading System (ETS) of offering free pollution permits needs to be reviewed and aligned more closely with climate policy if the bloc wants to reap the full benefits, the European Court of Auditors said on Tuesday (15 September).

Under the carbon market’s rules, a certain number of free allowances are offered to industrial sites, power generators and airlines, in order to stave off the threat of ‘carbon leakage’ – the relocation of business outside of the EU’s climate jurisdiction.

According to an in-depth Court of Auditors report published today, those gratuities are not targeted at the right industries and are jeopardising the EU’s climate agenda by failing to maximise the decarbonisation potential of the ETS.

“Free allowances should be targeted at those industrial sectors least able to pass on carbon costs to consumers,” said lead auditor Samo Jereb. “However, this is not the case.”

“Unless the allocation of free allowances is better targeted, the EU will not reap the full benefits the ETS could have on decarbonisation and public finances,” he added, citing the international Paris Agreement as a policy-making yardstick.

The ETS legislation foresees a gradual withdrawal of the free allowances – which currently make up 40% of the total number issued – up to 2030, as polluters green their facilities and reduce the likelihood that they will fall prey to the threat of carbon leakage.

But the auditors warned that is unlikely to happen under the current regime, as power plants and industrial sites invest in more efficient fossil fuel burning, for example, instead of clean energy, due to the lack of incentive provided by free allowances.

The report lists Bulgaria, the Czech Republic, Poland and Romania as the main countries where spending is focused in this way but did acknowledge that the European Commission has tightened the rules that will apply after 2021.

Plans to deploy a carbon border tax as part of the EU’s Green Deal were also factored into the audit, given that the ETS rules stipulate that free allowances can be reduced or eliminated if replaced by such an anti-climate-dumping mechanism.

A senior auditor told reporters that the planned tax and free allowances could co-exist to an extent if both were deployed correctly.

Interim EU trade boss Valdis Dombrovskis will be charged with making sure the tax is compliant with World Trade Organisation principles if he is given the green light by the European Parliament in October.

“We cannot create a situation where we give our companies free allowances, basically letting them pollute, and then imports of the very same goods are subject to levies, additional payments, based on the fact that they are polluting,” Dombrovskis said on Monday (14 September).

In their conclusions, the auditors urge the Commission to update how the threat of carbon leakage is assessed and to implement a sliding scale of risk to different sectors, so that free allowances are more effective.

The report also says that the EU executive should make a clearer distinction between biomass that is compliant with the bloc’s clean energy rules and that which is not. The auditors conclude that their recommendations can all be implemented by 2022.

Airlines also receive a tranche of free permits to spend on their intra-EU flights – trips in and out of the bloc are not included in the ETS. In 2019, airlines were issued €800 million-worth of allowances, some 50% of the total sector spending.

The auditors warn that the current system risks supporting carbon-intensive flights over rail travel, which although not included in the ETS still feels the indirect financial pinch thanks to power generators passing their costs onto their clients.

More than 50% of the EU’s railway network is electrified and that percentage is growing, meaning rail will be increasingly caught in the blast zone of carbon market pricing and lose further ground to airlines unless changes are made.

EU ministers are considering a Poland-led push to reduce, phase out or even eliminate completely aviation’s free perks. At a meeting in March, environment heads kicked off the discussion and more talks are expected over the course of the rest of the year.

According to the auditors, most intra-EU flights are under 1,000 kilometres and could be replaced with rail if the right infrastructure is in place. The report contrasts destination pairs served by both plane and train to demonstrate the carbon-intensity of air travel.

For example, the average emissions per passenger on the Barcelona-Madrid plane link is 115kg, while train travellers are responsible for 17kg. Between Stockholm and Oslo, it is 139kg by air and just 1.3kg by rail.

However, the report also acknowledges that the carbon emissions produced by creating new rail infrastructure, which can take several years or even decades to offset once up and running, must be factored into policymaking. 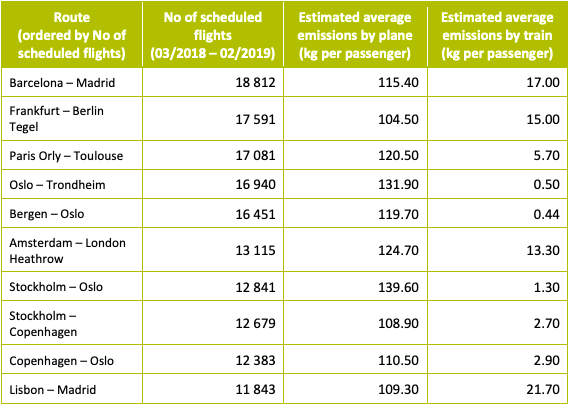