Around 45% of the European Union’s output of greenhouse gases is regulated by the Emissions Trading System (ETS), the bloc’s flagship policy to tackle global warming by charging for the right to emit carbon dioxide (CO2).

The ETS is expected to contribute around two thirds of the reductions needed to meet the EU’s target of slashing emissions by 20% from 1990 levels.

According to Thomson Reuters carbon analysts, emissions totalled 1.756 billion tonnes of CO2 equivalent (CO2e) last year for companies under the ETS excluding airlines, up 0.3% on the previous year.

Capped emissions from power and heating generation fell by 1 percent, but the overall figure was lifted by a 1.8 percent rise in emissions from industry. 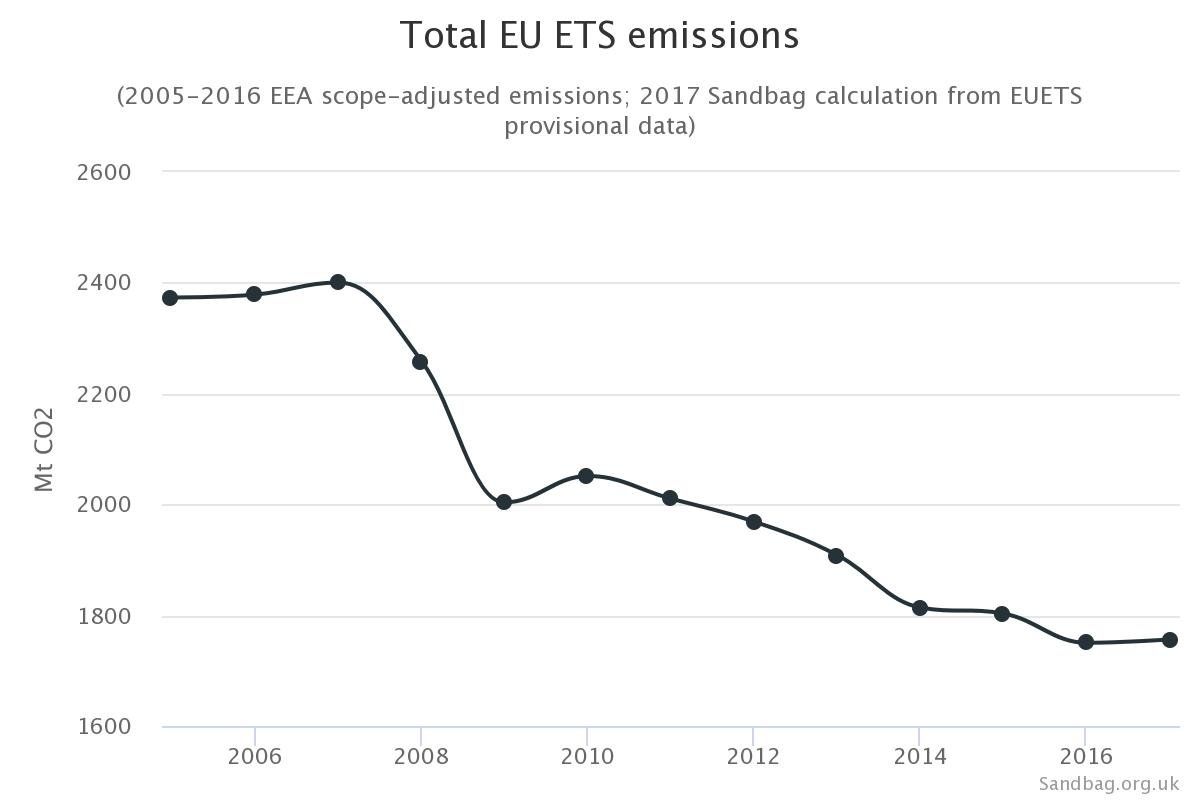 Emissions increased in 2017 for the first time in over half a decade. [Sandbag]

The ETS caps the emissions of around 12,000 power plants, factories and airlines, forcing them to surrender one carbon permit for every tonne of carbon dioxide emitted annually by the end of April of the following year.

Dave Jones, a carbon analyst at Sandbag, warned that “today’s data shows a worrying rise in EU ETS emissions. The build-rate of wind and solar is not sufficient to rapidly decarbonise the power sector, especially as electricity demand increases and nuclear plants close.

“Still in 2017, 38% of EU ETS emissions were from coal power plants, and for the first time over half of these are from lignite, which has now overtaken hard coal emissions.”

The data published on Tuesday accounted for 94 percent of companies covered by the scheme, Thomson Reuters’ analysts said.

The emissions figure is keenly watched by participants in the EU’s ETS as it provides a first indication of the supply and demand balance.

The benchmark EU carbon contract traded at 13.08 euros/tonne at 11:40 GMT, down 1.5 percent from the previous day’s close.

After further reviewing the preliminary data, the analysts forecast emissions from aviation rose 6.1 percent year-on-year in 2017 to 65.2 million tonnes, due to an increase in the number of flights, the analysts said.

Under the ETS, airlines have to report emissions for all flights that begin and end within the EU.

Sandbag also ranked the EU’s top polluters, revealing that Germany operates seven out of the top ten dirtiest power plants. The top spot was claimed by Poland’s Belchatow coal plant, which emitted 37.6MT of CO2 in 2017.