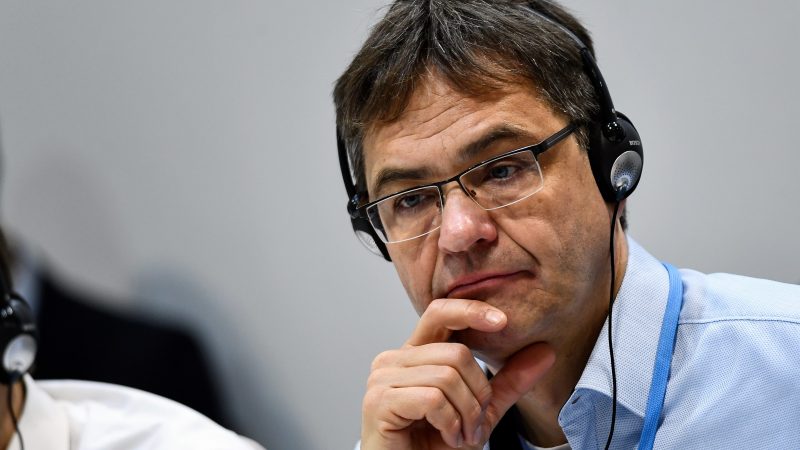 Lawmakers in the European Parliament’s environment committee agreed a major overhaul of the EU’s carbon market on Tuesday (17 May), including ditching free permits to pollute by 2030 and expanding the EU’s carbon pricing scheme to the maritime sector.

The revision of the EU’s emissions trading scheme (ETS), which was adopted by the environment committee with 62 votes for, 20 against and five abstentions, also included delaying the inclusion of private buildings and transport in a new carbon market until at least 2029.

“This compromise is good for the climate, jobs and people in Europe. We support innovation in industry and those companies that go for climate neutrality, will be better off,” said Peter Liese, the lead negotiator on the carbon market reform.

“Those that continue to pollute without investing will have a hard time,” added the German lawmaker from the centre-right European People’s Party (EPP).

The reform will now be presented to the full European Parliament for a plenary vote in June, opening the way for final talks with EU member states before the bill can eventually become law.

The EU’s carbon market, called the emissions trading scheme, puts a price on the emissions of around 10,000 installations in the EU power sector and manufacturing industry, covering 40% of the EU’s greenhouse gas emissions.

It is the main policy instrument underpinning the EU’s goal to reduce net emissions at least 55% by 2030.

However, industries sill receive a significant share of their CO2 credits for free. Those considered at high risk of relocating production outside the EU receive 100% of their allocation for free. For less exposed sectors, free allocation is foreseen to be phased out after 2026 from a maximum of 30% to 0 at the end of phase 4 (2030).

The free allowance scheme has come under heavy criticism for undermining Europe’s climate ambition. The fiercest critics include environmental NGOs but also the EU’s own watchdog, the EU Court of Auditors.

The agreement on the reform follows several gruelling meetings between the key lawmakers dealing with the ETS reform. Eventually, they agreed to:

This is considerably more ambitious than the European Commission’s proposal, which saw free allowances kept on until the mid-2030s and wanted all buildings and road transport to be covered by a new separate ETS.

Originally, Liese’s draft met heavy criticism. However, the agreement has now found enough support, with Socialist and Democrat (S&D) MEP Jytte Guteland saying that all her group’s priorities have been met. This includes increasing climate ambition, fairness for industry and improved social inclusion.

“The battle is not yet over, but it is certainly one crucial step forward to meet the goals set by the ‘Fit for 55 package’,” said the Swedish MEP.

Not everyone was happy with the agreement, however. According to employer’s group BusinessEurope, the political deal struck on Tuesday “risks seriously undermining European competitiveness”.

“If today’s positions agreed by the European Parliament’s environment committee became law, European economy as a whole would pay a heavy price, as the competitiveness of European industry would be undermined to an unprecedented extent,” said Markus J. Beyrer, the director general of BusinessEurope.

“By rushing from free allocation of emission allowances within the ETS to [the carbon border adjustment mechanism], placing a disproportionate burden on industry, and making the benchmarks unrealistically stringent, producers and employees all along the value chain would suffer,” Beyrer warned.

In parallel with phasing out free allowances, the European Commission has proposed introducing a new carbon border adjustment mechanism (CBAM).

In theory, this replaces the need for free allowances by imposing the same carbon price applicable in Europe to goods imported into the EU. The European Commission is betting on this to prevent businesses from leaving the bloc to countries where it is cheaper to pollute.

In another increase in ambition, lawmakers in the environment committee voted to phase in CBAM more quickly and completely replace free allowances by 2030 – five years earlier than the European Commission envisioned.

In addition, they want indirect emissions, like those coming from the electricity used by manufacturers, to be included in the calculations of how many emissions a product is responsible for.

This levy should be managed by a centralised authority, rather than individual implementation in each EU country, as the European Commission had proposed, according to the lawmakers, who voted on the agreement with 49 votes for, 33 against and 5 abstentions.

“Today’s vote is a great step in the right direction as it improves the Commission’s proposal to set up an ambitious and future-proof CBAM that will be a crucial pillar of European climate policies,” said Mohammed Chahim, the lead lawmaker in charge of steering the proposal in Parliament.

“Adopting the CBAM will be win-win for Europe, as it will be an important mechanism to incentivise our trading partners to decarbonise their manufacturing industry and at the same time allow us to fully apply the polluter pays principle to our own industry,” the Dutch S&D lawmaker added.

In his report, Chahim also called for CBAM revenues to be added as an additional source of income to the EU budget. Revenues generated by imports from least developed countries should also be matched by finance to help them to decarbonise, lawmakers said.

However, this could clash with European Commission plans. The EU executive indeed already has its eye on the money to repay loans taken out for the EU’s €800 billion COVID recovery fund.

The two proposals will be voted on by the whole European Parliament during the plenary session on 6-9 June. EU countries are also finding a common position on them and, once both sides have agreed, they will discuss with lawmakers to find an agreement on the final law.