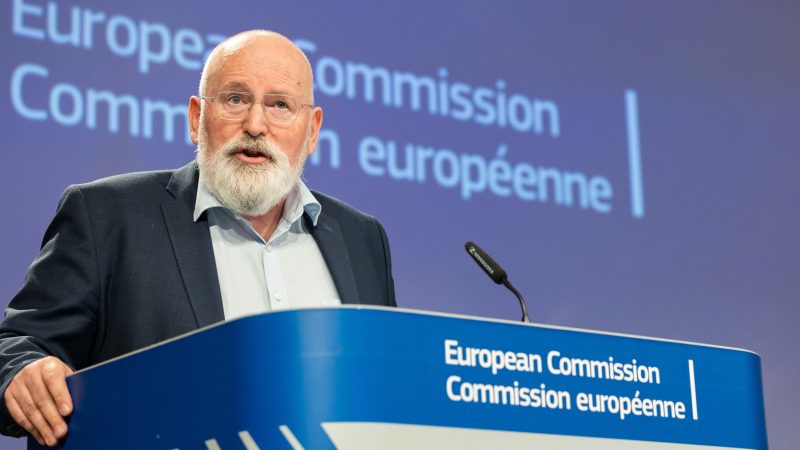 “We are convinced that this will in no way hamper us from reaching our -55% reduction target by 2030 – in no way,” said EU climate chief Frans Timmermans when asked to comment on Wednesday about the proposed plan. [European Union, 2022]

Analysts have slammed European Commission plans to raise €20 billion from the EU’s carbon market stability reserve as a way of financing a €300-billion effort to wean Europe off Russian fossil fuels.

The European Commission unveiled plans on Wednesday (18 May) to eliminate all imports of Russian fossil fuels by 2027, saying this will require a total investment of €300 billion by 2030.

To finance this, the EU executive proposed tapping into various budgetary sources, including the EU’s 800 €billion COVID-19 recovery fund and proceeds from the Emissions Trading Scheme (ETS), the EU’s flagship climate policy tool.

“We will bring €20 billion of grant money from the auction of allowances from the market stability reserve,” said a senior EU official who briefed the press yesterday about the Commission’s plans.

The reaction on the carbon market was immediate, with the price of EU emission allowances closing at €85 per tonne of CO2 on Wednesday (18 May), down from €92 the day before.

Florian Rothenberg, a carbon market analyst at ICIS, a commodity intelligence services firm, said the Commission’s move had eroded trust in the ETS as a climate policy tool.

“A lot of the price rally of EUAs between 2020 and today has been driven by trust in the system. Bringing Market Stability Reserve volumes back to the market would be a very heavy intervention that could undermine the trust in the long-term functioning of the system that market participants have developed,” he told EURACTIV.

The Market Stability Reserve currently contain 2.6bn allowances. “At a price of €80/tCO2e, this would mean 250m EUAs could be released, which would be a significant supply-side shock,” Rothenberg said.

The Market Stability Reserve was introduced in 2014 to support carbon prices on the ETS, which were trading below €10 per tonne of CO2 at the time.

This was meant to be a “non-discretionary” tool designed to “predictably maintain a scarcity of CO2 permits” to drive investments in low-carbon technologies, said Emil Dimanchev, a climate policy researcher.

“If policymakers can change the amount of CO2 permits available in non-predictable ways, this shakes investors’ confidence in the market and weakens incentives for low-CO2 investments. This reduces the likelihood the EUETS will drive the transition,” he commented on Twitter, saying the proposal sets “a bad precedent”.

Rothenberg agreed, saying the decision could be repeated in the future and sends out the message that policymakers can intervene at any time.

The EU in 2014: we’ll have a *non-discretionary* mechanism (MSR) to predictably maintain a scarcity of #euets CO2 permits.

The EU in 2022: we will offer permits back to polluters whenever we decide.

The European Commission refuted those claims, saying the move will not affect the carbon market’s long-term goal of reducing emissions by at least 55% by 2030.

“We are convinced that this will in no way hamper us from reaching our -55% reduction target by 2030 – in no way,” said EU climate chief Frans Timmermans when asked to comment on Wednesday about the proposed plan.

Estimates made by the Commission’s services show that “the number of allowances on the market in 2030 is estimated to remain in line with the -61% contribution of the ETS to the overall 2030 target proposed in July,” he said.

“So we don’t see any disruption of that happening,” he added, saying that the €20 billion raised will help speed up the transition from Russian fossil fuels to clean energy.

The proposal is now being sent to the European Parliament and EU member states for approval before being adopted into law.

“This potentially is a lengthy process, and it will probably take time until the €20bn mentioned in the proposal are raised,” Rothenberg said.