ETS extension: when in doubt, create a fund 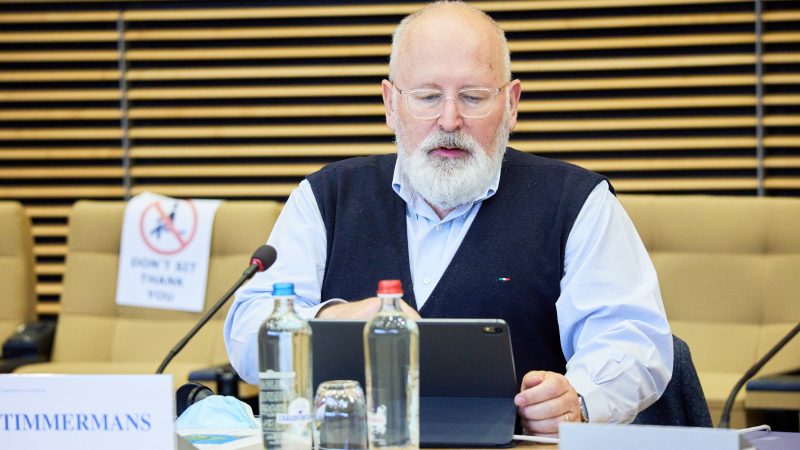 EU Green Deal chief, Frans Timmermans, has suggested a climate social action fund to support those hit by the carbon price, but the money for this needs to come from somewhere, writes Brook Riley [Claudio Centonze / EC Audiovisual service]

Geeky, technical work on how to create a carbon price for buildings and road transport that incentivises change without being too high is key to the extension of the emissions trading scheme, writes Brook Riley.

Brook Riley is head of EU affairs at the Rockwool Group, a Danish multinational manufacturer of mineral wool products used in building insulation.

‘When in doubt, create a new fund’ jokes one senior EU official. So in the face of mounting opposition to the Commission’s plans to introduce carbon pricing for fossil fuels in the buildings and transport sectors, climate policy chief Frans Timmermans duly promised a new ‘social’ fund. The goal: help the poorer households that would be hit hardest by energy cost increases.

Without a fund, the new carbon pricing proposal will not succeed – that much is clear. But there is a catch. The fund requires revenues to be effective. And to get revenues you need sufficiently high carbon prices. So the process of raising the money risks worsening the social impacts the fund is intended to address.

Is there a way round this? So far the assumption has been that the new carbon price would be the same in all member states. But the sort of price that could help convince a Bulgarian household to reduce its energy use would likely have little effect in, say, Denmark. On the other hand, a designed-for-Danes price would be too high for lower income EU countries.

This is why the Commission is expected to keep the carbon price low. However, even a low price – too low to fill the coffers of the social fund – could give Eurosceptics a ‘people’s tax’ stick to criticise Brussels. That game isn’t worth the candle.

One option could be to allocate revenues from the main Emissions Trading System, where prices are already close to 60 euros a ton, to top up the social fund. Press coverage of the Commission’s plans suggest some of these mainstream ETS revenues could indeed be earmarked for low income households. Then again, the whole point is to keep the new carbon pricing system for buildings and transport separate from the main ETS, in order to protect consumers from too-high prices. So that logic may apply to the use of the ETS revenues too.

There is another option: what if carbon prices for buildings and transport were set on a country by country basis, taking GDP per capita into account? This is the usual practice with other proposals (think of the recovery funds, or the effort sharing decision). Revenues would be higher. The process of raising the money would be fairer. And if access to the fund is made conditional on meeting more ambitious building renovation or car emission standards, you could have a genuinely effective and equitable policy – also enough to defuse the anti-Brussels message.

The operative word here is ‘could’, however. Carbon pricing seems to symbolise all the tension between the hoped-for simplicity of climate action and its actual complexity. It assumes people will respond rationally to price signals, yet Nobel prizes in economics are won for proving we do not.

This is why so much comes down to the resources the Commission deploys to help people react to the price signal by renovating their homes and choosing cleaner forms of transport. An obscure Commission directorate called REFORM will soon be announcing special support for ministries, regions and cities to scale up their building renovation programmes. This is geeky, technical ‘how to’ work – and it is precisely what should be at the centre of the carbon pricing plans.

Think of the parallels with the vaccination campaign. If you are encouraged to get the jabs and the organisational details are taken care of, it is straightforward. You pick a date and turn up. It is the same principle with insulating homes. Action has to be easier than inaction.

There is also the sensitive question of the share of carbon pricing revenues going into the social fund. It currently looks as if the Commission is planning to allocate only 50% of the revenues to low-income households, with the rest being used to repay the EU’s recovery loans or going back into national budgets. But a new carbon price system that only invests half of its revenues to help households react to the price signal could be a perilous political mistake. It all comes down to ensuring people do not feel trapped by higher prices.