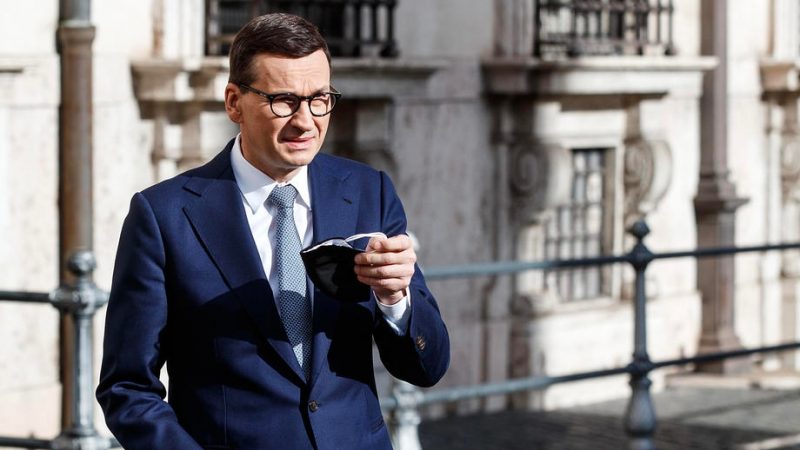 Mateusz Morawiecki is the prime minister of Poland. This opinion piece has been written exclusively for EURACTIV.

The European Union is facing a moment of crucial decisions. One of them is to answer the question of what to do about the CO2 emissions trading scheme.

The price increase is out of control and hitting the household budgets of EU citizens. It threatens the financial security of ordinary people, which has already suffered from the pandemic crisis. Above all, it undermines citizens’ confidence in the EU’s climate policy concept.

The principle expressed in recent days by the President of the European Commission is that ‘the end justifies the means’.

Therefore, regardless of the cost, climate policy must follow a path once chosen. It is contrary to the assumptions of a fair energy transition, which is defended by Poland and other countries.

The thesis that an increase in emission prices, and thus a drastic increase in energy bills, is the right direction that does not require adjustments, in fact, means a green light to further speculative functioning of the EU system.

According to President von der Leyen, ‘the rising price of certificates is a strong economic incentive for companies to become more efficient and switch to clean production’.

Correct, this is the logic of reducing emissions, but the ETS trading system was meant to encourage companies to evolve rationally, not to impose a pace that threatens their growth.

A rapid rise in prices will not be a positive incentive, but a barrier that will prevent thousands of companies from operating. Another consequence is the growing opposition of European societies, which may rise up in revolt against the gigantic costs of an unfair energy transition.

We will not build the Green Deal if it strikes the prosperity of Europeans.

Stable and predictable prices are crucial for a responsible transition. Too large fluctuations in volatility in EUA prices can jeopardise the investments necessary for the stability of our economies. The current energy crisis shows the consequences of price instability in this sensitive sector of the economy.

The huge increase in generation costs that has just been observed forces companies to temporarily reduce production – the phenomenon of ‘demand destruction’ is emerging.

Supply problems significantly increase the price of food and contribute to increased inflation.

At the same time, the cost of purchasing emission allowances under the EU ETS is causing energy bills in Poland and many EU countries to rise on an unprecedented scale.

The carbon price was not to be achieved until 2030, even under the most stringent scenario. With such differences in forecasts and reality, the transition cannot be considered fair, understandable for citizens and predictable for companies, which, after all, must plan their investments in advance and in a cost-optimal way.

The rise in energy prices is also being escalated by the Russian geopolitical game. In any market, a monopolist will sooner or later use its advantage.

Today, the whole of Europe is experiencing this, not only in the EU, but also in Moldova and Ukraine.

I am glad that European Commission President von der Leyen shares the same view as Poland on this issue: Europe’s dependence on imports of energy resources, especially from a single, dominant supplier, is contrary to the interests of the EU.

However, this should not be an argument against the reform of the ETS, but against anti-EU energy projects such as Nord Stream 2.

Therefore, the question of why the EU did not stop Germany from implementing this gas pipeline project returns over and over again.

If we do not quickly address the emerging crisis, it will have multidimensional consequences.

The EU has always been a leader in the fight against climate change, and it is understandable that it wants to maintain this position. Poland also wants to follow this path. In a spirit of solidarity, we agreed to raise the 2030 emissions reduction target to 55%.

However, the condition was to obtain assurances that the implementing acts would be technologically neutral and that the problem of the deficit of allowances in the beneficiary countries of the Modernisation Fund would be resolved.

I am disappointed to note that these conditions were not included in the EC’s Fit for 55 proposals. High allowance prices, combined with limited investment support, may in the long term significantly slow down the pace of transformation in Poland and thus bury the ambitious climate policy goals.

The energy transition is not a race, where speed matters, but a common road we must all travel together.

Therefore, I consider it necessary to carry out a profound reform of the ETS system, which will take into account the current situation on the energy market and the market for emission allowances, as well as the conclusions of the European Council of December 2021. Two elements are now needed to bring us closer to a fairer ETS trading system.

First, analysis and control of the emission allowance market. By building appropriate regulatory and supervisory solutions, we must cut through the speculative bubble that has built up around ETS trade.

Second, the pressure exerted by the Market Stability Reserve (MSR) on the supply of emission allowances should be reduced. Each year, about 300-400 million allowances go into the MSR, drastically reducing the number of allowances available for auction.

When prices on the ETS market fluctuate between €70 and €90, allowances are still taken from the market and transferred to the reserve.

The ETS needs to be changed also so that the path no longer resembles Bitcoin, where we see a lot of speculation.  Such an economy is not healthy, as it is our citizens who pay for it in the first place.

The coming years will be a real test for EU climate policy. The key to its success is progress in reducing CO2 emissions. But we must remember that emissions’ reduction is not an end in itself.

The goal is to build clean, liveable cities for all of us.

However, care for the environment must serve people, not generate costs they cannot bear. Without the trust of EU citizens, no policy can be made. This also applies to climate policy.

One response to “PM Morawiecki: The EU ETS system driven by speculators must be reformed”