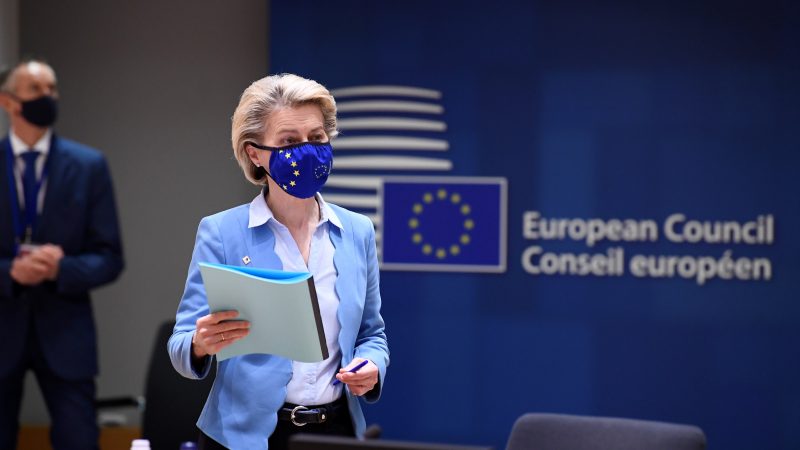 The European executive has hinted that they intend to broaden the emissions trading scheme to cover road transport and buildings, but there are many concerns about the possible impact of this [JOHN THYS / EPA-EFE]

As European leaders meet today to discuss the share of emissions reductions across Europe, they must focus on how to do this effectively and avoid the possible repercussions of expanding the emissions trading scheme, writes Marcin Korolec.

Marcin Korolec was Poland’s minister of environment in Donald Tusk’s cabinet from 2011 to 2013 and secretary of state responsible for climate negotiations from 2013 to October 2015. He is currently the Director of Green Economy Institute in Poland.

As European Union leaders gather today to discuss ways of meeting the EU’s 55% emissions-reduction target for 2030, it is time to ditch a bad idea being pushed by Germany: putting a cap-and-trade system on the all-important building and transport sectors.

The responsibility for emission reductions in these sectors is currently shared by EU members and regulated nationally.

The Emissions Trading System (ETS), a key pillar of EU climate ambition, isn’t a one-size-fits-all instrument, and widening the scope to include buildings and transport may not necessarily lead to emission reductions, but we do risk a social backlash in Europe.

Less than two years ago, European Commission President Ursula von der Leyen, in her political guidelines, announced: “I will propose to extend the Emissions Trading System to cover the maritime sector and reduce the free allowances allocated to airlines over time. I will also propose to extend this further to cover traffic and construction.”

On the day of the European Council, which is to decide on the legal architecture of climate policy up to 2030, let’s consider whether von der Leyen’s political guideline of covering the transport and buildings sectors with the current ETS makes sense after all, and what the environmental and social consequences of such a solution could be.

I am convinced by including transport and buildings in the existing ETS, we would create a situation in which emissions would fall faster in sectors currently covered by the ETS and, in transport and buildings, the price of emission allowances would rise slightly, i.e. the ETS would play the role of a new environmental tax without providing an impulse for technological change.

If so, the question should be asked as to its rationality from the point of view of the less affluent social groups, and how this solution would build greater credibility in the European Union and stimulate the transformation of the economy affected by the COVID-19 crisis.

Another scenario, which separates the transport and buildings in a dedicated ETS, raises additional questions about social justice and burden sharing between member states.

After all, an owner of a large off-road vehicle/SUV from one of the northern EU member states, such as Germany or Sweden, would have to pay the same carbon price as a pensioner from central and eastern Europe, such as eastern Poland or Bulgaria, who has a very different income level and often already struggles to pay the bills for heating their home.

An additional complication in the introduction of an ETS covering transport and buildings is the distribution of revenues from emission allowances among member states.

The introduction of a single price for emission allowances across the European Union should be accompanied by the compensatory mechanisms for countries with lower per capita income, who would be relatively harder hit by an EU-wide carbon price.

Such solutions were applied both at the time of the introduction of the existing ETS system and its subsequent reforms. And here another challenge arises. Some countries, such as France, have a largely zero-emission system for heating buildings, due to the fact that a majority of homes are heated by electricity from nuclear power plants.

How then, is France going to participate in the burden-sharing with poorer EU countries?

Proposing far-reaching reforms to the system, such as setting up a new ETS for the transport and buildings sectors, is a way of complicating and slowing down the decision-making process at a time when we should be moving as quickly as possible towards increasing and implementing ambition in existing measures of the Fit-for-55 package.

If we want to achieve climate neutrality by 2050, we should take determined action in all areas of the economy in 2030 in Europe.

The latest report by Cambridge Econometrics entitled “Exploring the trade-offs in different paths to reduce transport and heating emissions in Europe” indicates that appropriately introduced higher reduction targets in sectors not covered by the ETS system lead to an increase in GDP and job growth if achieved through a policy mix of stringent regulations.

The same report indicates that including transport and buildings in a new ETS, without deep reform of the member states’ revenue system, does not guarantee such positive socio-economic effects.

If we really want to undertake a reduction in road transport emissions in Europe, we must rely on mechanisms that are already in operation, and we must only ensure that they are able to implement the new, stricter climate policy objectives. In the transport sector, a prerequisite for achieving climate neutrality in 2050 is to end the sale of new combustion-engine cars (ICEs) by 2035.

By then, the automotive industry should have carried out the necessary restructuring and should have switched its production capacity to zero-emission cars.

The only effective mechanism which will be able to mobilise the car industry for the necessary transformation is a further tightening of the emission limits contained in the regulation setting CO2 emissions from ICE cars.

In the buildings sector, firstly, we must introduce regulations to ensure that all new buildings are zero-emission as soon as possible. We must allocate appropriate funding in our national budgets and in European funds as well as deliver robust legislation to retrofit existing buildings.

In conclusion, I hope that the forthcoming European Council will concentrate on answering the question of how to achieve the climate policy objectives as quickly and effectively as possible on the basis of legal foundations which are familiar to everyone.

Otherwise, there is a risk that instead of continuing the current systems, which is good enough, we will be immersed for many months in negotiating successive intergovernmental compromises.