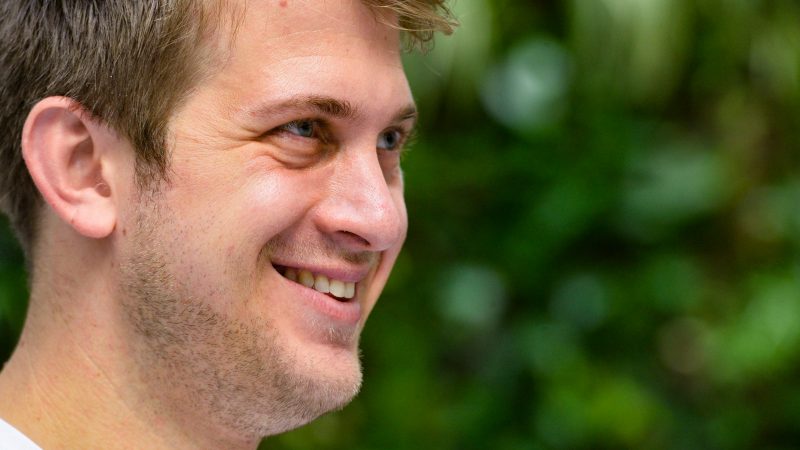 Michael Bloss is a German MEP who is shadow rapporteur on the revised ETS for the Greens/EFA group in the European Parliament. [© European Union 2020 - Source : EP]

Today’s European Parliament vote on the revised EU Emissions Trading System is meant to defend a minimum standard on climate action, argues MEP Michael Bloss. “This is, unfortunately, all we can get with the current majorities in the European Parliament,” he writes.

Michael Bloss is a German Member of the European Parliament affiliated with the Greens/EFA group. He is the shadow rapporteur for the Greens on the revised ETS directive.

A democracy that does not argue is not a democracy at all, former German Chancellor Helmut Schmidt once said. And we in the EU Parliament have argued a lot. At the beginning of June, about the emission trading system, the percentages in climate ambitions, or the final phase-out date for free CO2 certificates. What is complicatedly called rebasing, LRF or one-off reduction became a real climate protection thriller.

This thriller was caused by a fossil alliance of conservatives, right-wingers and liberals in the EU Parliament. After the historic decision of the Parliament’s Environment Committee on the new emission trading system, they had joined forces to significantly lower the ambitions for climate action in the plenary vote.

A year earlier, the EU Commission had proposed its idea of 61% fewer emissions within the trading system. The Environment Committee wanted 67%, and the fossil alliance wanted none of that. It wanted even less and ripped loopholes into Europe’s biggest lever in climate action to make it weak.

This deal is not historic, it is a minimum standard

This alliance received almost jubilant support from the industry associations. The Commission proposal was already too much for them. Peter Liese, the rapporteur of the negotiations, had the door open for this; right-wingers and liberals supported his course. The support came in handy. Within his own EPP group, Peter Liese fought doggedly, sometimes courageously, for a new CO2 trading system that would at least support the Commission proposal well. However, Social Democratic and liberal ideas of an earlier end to CO2 certificates from 2032 and even more so the compromise reached by the ENVI Committee, supported by us Greens but also most social democrats to phase them out by 2030, had the conservatives and their lobby friends up in arms.

The course for the final vote in the EU Parliament at the beginning of June thus seemed clear. Several amendments from the conservatives, the right, and the liberals dismantled the proposal of the Environment Committee into its individual parts and formed a new fossil puzzle. This is how it came about that almost all amendments were passed. Then came the big bang: Social Democrats and Greens voted against the final report. The right-wingers left the fossil alliance and voted against it. Peter Liese’s proposal failed. His gamble didn’t work. The information went back to the Parliament’s Environment Committee.

There it was clear: Peter Liese could not rely on the right-wing, so he formed a new alliance with liberals and social democrats. We supported this and put forward our ideas. In the end, we were able to push through a climate ambition level of 63%n slightly better than the 61% proposed by the Commission. But that is not historical, that is the minimum standard for climate action.

Why I am voting for the deal

The Greens often play the role of the admonishers. For us, climate action is always too low. That has its justified points. France is rationing water, experiencing an extreme heat wave and measuring new temperature records. So is Italy, and in Germany, forests are on fire. Only June, July and August are still coming, and the climate crisis takes over. We are warning because the reality of the climate is warning us. Look, there is something wrong with the environment. If we listen to science, warming should be limited to a maximum of 1.5 degrees. This may not sound like much, but if we surpass this, we will live in a radical new reality which is hard enough to accept.

If we break this target, things will get really uncomfortable. The Paris Agreement rightly says the 1.5-degree climate target is important. And we signed this climate agreement in 2015. Only last year in Glasgow, the importance of the 1,5-degree target was stressed again. That is why we stood up to the fossil lobby, the fossil alliance. That is why we are admonishing, and that is why it is important to say now: with the new deal of 63% emission reductions of the ETS sectors by 2030, we will not be able to meet the 1.5-degree climate target. This is historical because all that remains is for us to do everything we can to limit global warming to below two degrees. Otherwise, we break with the Paris Agreement and experience a world nobody wants.

So I’m voting for this deal because even this minimum standard on climate action is not yet certain. In autumn, the trilogue – the negotiations with the EU Council and Parliament – will begin. The Council is already letting it slip that the hard-won end of free CO2 certificates in 2032 would be too early, they want to maintain free emission certificates until 2035. We can also expect a patchwork of loopholes to address all particular national concerns. With my vote for the current deal, I want to defend the minimum standard vis-à-vis the Council.

We face a crucial decision

In all the scramble for percentage points for climate ambitions, we must not forget: We are talking about Europe’s energy sovereignty, which will be decided based on CO2 trading. We are talking about the modernisation of our industry and how quickly we will produce in a climate-neutral way. But above all, we are talking about an international climate agreement that we have signed that defines nothing less than the world in which we and all future generations will live.

In other words, Europe’s wrangling over the new carbon deal means we are facing a crucial decision. My vote today for the new deal is not the end of the line, but only the beginning of climate ambitions we will have to defend in the months ahead.