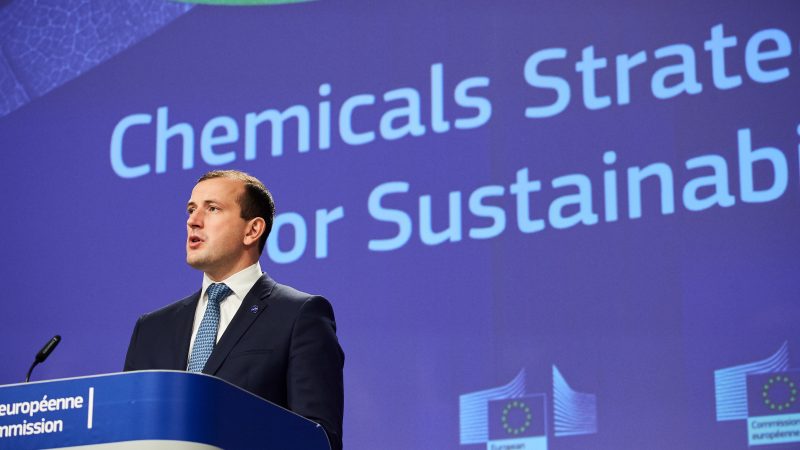 "I am glad that Virginijus Sinkevičius [in the picture] has kept his public promise to me and that endocrine disruptors will soon be largely eliminated from everyday products," said Green MEP Sven Giegold. [BENDO/EC]

A commitment to reduce the exposure of humans and the environment to endocrine disruptors was included in the EU chemicals strategy, unveiled by the Commission on Wednesday (14 October).

EDCs are a class of chemicals commonly found throughout our environment in children’s products, food containers, personal care products, pesticides, furniture and more.

These substances alter the functioning of the hormonal system, having a negative effect on the health of humans and animals.

The issue started being discussed in the EU as early as 1996 and the Commission recognised EDCs as a health and environmental hazard in its “Community Strategy for endocrine disruptors” in December 1999.

The interest in tackling EDCs was revamped in November 2018, when the Commission published a new strategy for endocrine disruptors and launched a comprehensive screening of the legislation applicable to EDCs through the so-called ‘fitness check’ process.

The cross-cutting fitness check has been finalised in the first half of 2020, as scheduled, and the outcomes are an annex to the Chemical Strategy itself.

The assessment concluded that the EU regulatory framework on the matter “is overall fragmented, limited and needs to be consolidated and simplified to ensure that endocrine disruptors are recognised in a timely manner and that exposure of humans and the environment is minimised.”

The Commission has proposed a comprehensive set of actions in the new strategy to cope with loopholes highlighted in the fitness check.

First, it will establish legally binding hazard identification of endocrine disruptors based on the definition of the World Health Organisation (WHO) and apply it across all EU legislation.

In addition to this, the Commission will commit to ensuring that endocrine disruptors are banned in consumer products as soon as they are identified, allowing their use only where it is proven to be essential for society.

“We are already working together with experts from EU member states over the proposal to include the identification of endocrine disruptors under the Classification, Labelling and Packaging regulation (CLP),” said Sinkevičius.

He added that the EU is in parallel working at the global level to include the identification in the Globally Harmonized System of Classification and Labelling of Chemicals (GHS), an international agreement on labelling schemes standards managed by the United Nations.

German MEP Sven Giegold for the Greens welcomed the renewed ambition to take precise actions against the group of hormone disruptors.

“I am glad that Virginijus Sinkevičius has kept his public promise to me and that endocrine disruptors like carcinogenic substances will soon be largely eliminated from everyday products,” he said in a comment.

Natacha Cingotti, Senior Policy Officer for Health and Chemicals at the Health and Environment Alliance (HEAL), said that initiatives to better categorise and strictly regulate chemicals of concerns such as endocrine disruptors and PFAS are particularly pressing.

Commenting on the release of the strategy, Monique Goyens for the European consumers association BEUC urged further action “to ensure that loopholes such as on endocrine disruptors in cosmetics, toys and food packaging are closed without delay.”

Close to 800 chemicals are known or suspected to be capable of interfering with hormone receptors, hormone synthesis or hormone conversion, according to a report drafted in 2012 by the United Nations Environment Programme (UNEP) and the WHO.

The health costs of exposure to EDCs is estimated to be at least €163 billion per year in Europe alone. 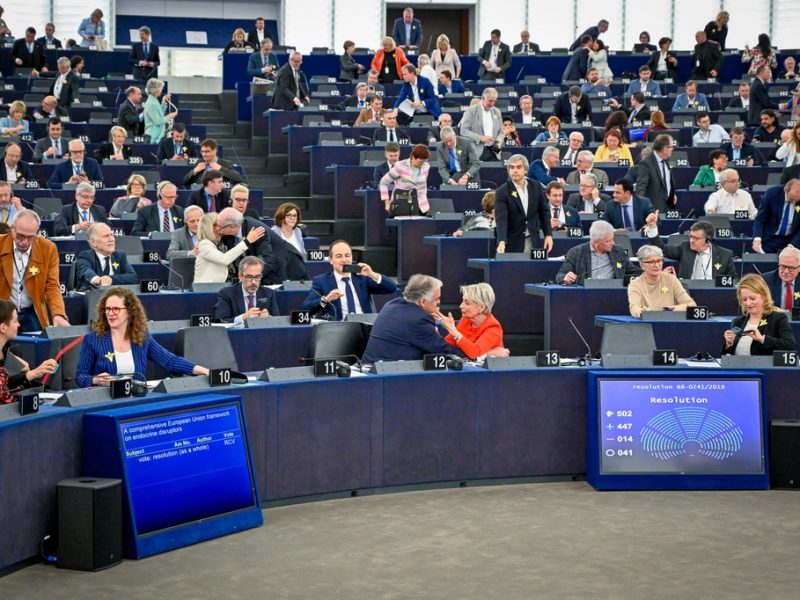