Canfin MEP: ‘Here is my proposal to find the right compromise on gas and nuclear in the taxonomy’ 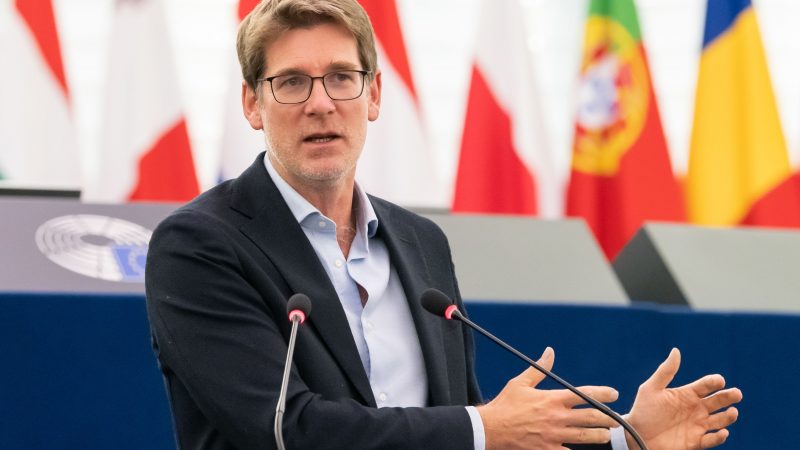 "This proposal does not cross any red lines. It does not put at risk the use and the credibility of the taxonomy because it ensures transparency and traceability," says Pascal Canfin. [© European Union 2021 - Source : EP]

With proper safeguards in place, gas and nuclear power can be included in the “transition” category of the EU’s green finance taxonomy, says Pascal Canfin, a leading lawmaker in the European Parliament.

Pascal Canfin is a French MEP for the centrist Renew Europe group in the European Parliament, where he chairs the assembly’s environment committee (ENVI). He spoke to EURACTIV’s energy and environment editor, Frédéric Simon.

The European Commission tabled a first set of implementing rules – a delegated act in EU jargon – under the EU’s green finance taxonomy in April. Where do we stand with this proposal?

The first delegated act has already been passed in Parliament. Objections have been voted down twice, so now it’s fully adopted and behind us on the Parliament side. In the Council, the deadline for voting an objection is 7 December, and it is very unlikely that a qualified majority will be found to reject this text.

So now is the right time, in my view, to finally solve the issue of the treatment of gas and nuclear in the taxonomy.

Why do I say this? First, because there is a coalition contract in Germany, parties have agreed to speed up the country’s coal phase-out from 2038 to 2030.

This implies building more renewables, obviously, but also more gas. And this is exactly where gas can positively contribute to the energy transition: when it replaces coal in power generation. Even the German Greens are supporting this trajectory.

Then, on the nuclear side, something is a game-changer – and that is the massive rise in electricity demand that will come from the transition to electric mobility and clean industrial processes using hydrogen and other technologies.

At the end of the day, this means massive additional volumes of decarbonised power generation. And that’s where there is a space for nuclear – as a backup to a renewable-based energy system because renewables are already the cheapest form of electricity.

If you combine these two elements, you will see that there is a pathway to have – under strict conditions – nuclear and gas in the taxonomy as a transitional source of energy.

Gas and nuclear are two very different energy technologies, one is almost zero-carbon, and the other is a fossil fuel. Why are they linked in your view?

Indeed, they are different, but their fate politically is intertwined.

I was co-chair of the European Parliament team, which negotiated the taxonomy regulation almost two years ago. And the strategy from the beginning has been to postpone the question of gas and nuclear in the regulation because the subject was highly sensitive politically. There was an urgency to move forward with the taxonomy regulation, and the question of gas and nuclear could freeze the entire negotiation.

That’s why we decided to leave it open in the taxonomy regulation. And that’s why I believe it was a good strategy from the European Commission to leave out gas and nuclear from the first taxonomy delegated act, which was tabled in April.

Now, things have changed – because we have the potential new German coalition, the French EU presidency coming in in January, this new setting regarding the growing volume of power generation. And also because we have the energy price crunch, which again demonstrates that we need to move out of our fossil fuel dependency.

For all these reasons, I believe now is the right time to solve the problem. That’s why I urge the European Commission to put its proposal on the table within the next two weeks.

Let’s focus on nuclear specifically. Several EU expert reports were published over the summer, concluding that nuclear power was safe and eligible for a green investment label under the taxonomy. Does the Commission have any other option than to propose including nuclear as a “green” technology under the taxonomy?

That’s why we need to have a very clear safeguard system in place. In my view, this can take the form of a specific disclosure requirement, focusing on gas and nuclear only. It would be like a box that banks or investment funds would have to tick if they want to issue financial products or bonds with nuclear or gas assets included in them.

It would be like an opt-in system where a financial market participant would say: ‘gas and/or nuclear may be included in my investment portfolio, and that’s not a problem for me’.

If there is this specific mandatory disclosure requirement, we keep an integrated taxonomy with the same legal framework and at the same time, we build enough flexibility to allow financial market participants to include or exclude nuclear or gas.

In doing that, we avoid the risk of jeopardising the credibility of the whole taxonomy.

For some investors, we know that having nuclear in the taxonomy is a no-go. But for others, it’s not a problem, so let them choose. And to choose, we need to have a disclosure requirement, which applies to gas and nuclear.

It’s a core element of the landing zone because it provides more flexibility while ensuring that the taxonomy remains a transparency tool to fight against greenwashing and ensuring the traceability of investments.

So this is a box that investors themselves would need to tick, correct?

Either the investor or the asset manager or the bond issuer – all the relevant market participants would have to choose whether they want to tick that box.

Another compromise idea was floated recently by Mairead McGuinness, the EU Commissioner for financial services. She suggested that the transition category in the taxonomy could be expanded or that a new “amber” category could be created for technologies that are not “green” as such but are still helpful in the energy transition. Is that an idea you would support?

At the moment, there are three categories in the taxonomy – “green”, “enabling”, and “transition”.

Creating a new “amber” category would require a new legislative proposal to amend the taxonomy regulation. That would require scrutiny and approval by the European Parliament and the Council of the EU, which is likely to take at least one or two years.

A second option is to use the existing taxonomy regulation and to include nuclear and gas in the “transition” category. That would be sound from a legal perspective and a political perspective as well.

You don’t believe nuclear can fit in the green category, then?

Let’s face it, no one will ever be able to demonstrate that nuclear waste doesn’t pose any problem for the environment.

However, it’s an energy source useful for the green transition because it is decarbonised. And that’s a fact that cannot be disputed. This is why it has its place under conditions in the “transition” category of the taxonomy.

Recently, a text has been circulating with some specific thresholds for gas to be considered in the “transition” category. Do you believe that this proposal goes in the right direction?

I think this proposal cannot, in any case, be in the landing zone because it is too loose, in my view, for gas in terms of the emissions criteria.

So what are the proper criteria for gas?

The first thing is to consider gas a “transition” fuel when replacing coal – and only when replacing coal – because we want to pursue decarbonisation. If you replace a coal power plant emitting around 1,000gCO2/kWh with a gas plant that emits around 250gCO2, you divide your emissions by four overnight. Then it makes sense, but only when it’s replacing coal. And these criteria did not appear in the paper you mentioned, which for me, disqualifies this proposal.

A third criterion is that any technology has to be compatible, over the project’s lifetime, with the EU’s objective of reaching climate neutrality by 2050. That means introducing a sunset clause for building new gas power plants, and the correct timing for that is somewhere between 2025 and 2030.

By 2050, emissions will have to fall to zero. Gas is transitional energy that should not hamper the development of renewables but work as a backup. This is why in our view, there is no economic rationale in putting a new gas power plant on the grid after 2030 because it will need to be withdrawn before 2050.

The sunset clause would apply to all new gas power plants?

Yes. We are only talking about compliance with the taxonomy here. This means that, after a specific date, between 2025 and 2030, there would be no more taxonomy-compliant financing because this is not compatible with our 2050 climate neutrality objective.

And this is exactly what the German parties are currently aiming for in the coalition talks, including with the Greens: phasing out coal by 2030 instead of 2038 and relying on gas in a transitional capacity before renewables take over.

This is why the sunset clause has to be by 2030 at the latest. And it cannot be before 2025 because otherwise, it would be unacceptable from a German perspective.

If the Greens are ready to accept this in Germany to accelerate the phasing out of coal, I don’t see why they wouldn’t accept it at the European level.

Final question: it seems that France has started organising meetings with like-minded countries in central and eastern Europe on the taxonomy. Do you believe France is stepping on the European Commission’s toes here?

Well, the Commission itself has asked member states to put proposals on the table, so I don’t think France is breaking any rule here. If tomorrow there is a non-paper coming from Germany, Poland or Belgium, that’s fine.

Regarding France, the key priority is nuclear – there is no major issue at stake when it comes to gas in France. And I think the legal analysis has demonstrated that you can have nuclear in the taxonomy under the “transition” category.

My analysis is that if you put nuclear in the “green” category, you take the risk of having the proposal annulled by the European Court of Justice. Because we have to put ourselves in a situation where whatever legal act is put on the table, the proposal is likely to be challenged legally before the ECJ – Austria, and environmental NGOs have already mentioned it.

On the other hand, if you put nuclear in the “transition” category, it’s easier to argue that it is decarbonised and therefore useful for the transition, even though it is not green in terms of waste and risk.

And in addition, there would be a disclosure requirement, allowing investors the freedom to choose whether they want nuclear in their asset portfolio or not. That’s why I think it is wiser and safer to use the “transition” category for nuclear.

This proposal you’re making now, is it something that is being also considered in the Commission as far as you’re aware?

It is my initiative, which I shared with the European Commission, and I know it is being considered.

This proposal does not cross any red lines. It does not put at risk the use and the credibility of the taxonomy because it ensures transparency and traceability; investors can choose to opt or not for gas and/or nuclear; it is okay for France as nuclear is in; It is also acceptable for Germany because it is in line with the coalition talks, including the position of the Greens. And it is also okay for Poland.

We have already voted something equivalent in the EU’s structural funds, where the Parliament and Council have supported gas with a sunset clause and under specific conditions – when replacing coal and when emissions are below the ‘Do no harm’ threshold. So I think this is something that can fly.

Last comment: once the Commission puts its new complementary DA on the table, a qualified majority must be found in the Council to reject it.