This article is part of our special report Seal of approval: Greenland fights stereotypes on Inuit hunt.

It is not profitable and may never be. And the EU has banned it. So why should seal hunting be supported? Because it is a sustainable way of life for Inuit people – and sometimes their only one. And the way forward for Greenland’s independence, says Ditte Sorknæs.

Ditte Sorknæs is the CEO of Great Greenland, a Greenlandic public company trading in sealskins and sealskin products since 1977.

When a seals ban was proposed in 2009, your environment minister cried out against “eco-colonialism” – are you satisfied with the regime now?

The ban itself hasn’t changed. The foundation of the ban is wrong, in the sense that if you look at facts it doesn’t make any sense. But from the European side, they’ve kept on claiming it is a moral law. If you look at it as a moral law, that’s where the colonialism comes in, because who are these morals for? It’s definitely not for the Inuit, who have lived with and off the sea for centuries. So this is very much the European morals, if any moral at all.

We’ve had the Inuit exception since 2010. That does make some difference for us but does not change the big picture.

When you say that by the facts, the ban doesn’t make sense- what do you mean?

Say for instance the ban on trading polar bears, it does make sense because the polar bear is a threatened species under IUCN standards. But if you look at the two type of seals that we and other Inuit areas trade in, Harp seal and Ringed seal, they’re not threatened at all. There’s an abundance of them. One of the big issues is that there are so many that you can’t give a specific number.

The second thing is you can look at is this in any way harmful? Obviously, it isn’t, we are talking about a wild living animal that is killed for food, and where the skin is a by-product. It doesn’t pollute anyway more than it would by living freely. It’s killed and eaten in a local area, instead of having things flown in. And the fact that everything is used, in our day and age with a growing global population, reducing waste is one thing that we have to look into, and the Inuit have done so for centuries.

The legislation already allows trade in Inuit seal products provided they are accompanied by a certificate issued by an authorised body. There is a paper trail. What will change now? Why a QR code?

The system we have today is very much based on skin. That’s not going to change. We have the certificates but the minute they are made into a product, say a coat, or a purse, or even a keychain, you don’t have any way of knowing is this an Inuit hunted seal or is it a commercially hunted seal?

So the whole idea of the QR code labelling is that it follows the skin as well, but it can be sewn into the final product. So if you, as a consumer, go into a store, look at a jacket, you like it but you have doubts – is this legal or illegal? You can scan the QR code and see it is legal because it has been hunted by Inuit.

Under the Inuit exception, seal hunting is permitted provided that the hunt is conducted for and contributes to the subsistence of the community and is not conducted primarily for commercial reasons. This leaves room for interpretation – how do you interpret this?

But some of the wording does worry us because it uses wording such as “traditional hunt for subsistence purposes”, with a ban on the commercial side of it. That’s a little bit difficult. If you really want to interpret to the letter, you can say that the minute a hunter sells the skin to us rather than just give it to us, isn’t it a commercial situation?

So I think as a company, if we’re doing better in the marketplace – theoretically, if we got a really good price for our skins, and we made good margins rather than have red numbers in our accounting all the time, would that mean we are going against the law, because we’ve become commercial? So there is something in the law which is not really specified and will be tested in the coming years as we improve.

What is your business volume?

Since the ban, we have exported between €1 and 2,5 million in sealskins and sealskin products per year. The joint export has been stable in the last years, but the interesting bit is that the split between finished products and skins have changed. Up until this year, the majority of our exports were skins. Ready tanned skins, but skins.

From this year, we see that the finished product is a larger portion. We went from having a closed-down workshop in 2015, and within two years we have grown to four full-time employees. That means a lot to the local community. Having good work is definitely important, and I see it growing: I expect that this time next year we will have six full-time employees.

Is there a risk that introducing certification schemes and encouraging trade will pose a threat to the seal population? Are there any limits to how many seals can be hunted?

I don’t expect this, at least in Greenland. This is not profitable industry. Every time we buy a skin from a hunter, it is 100% subsidised by the government. No matter how good sales are, it would take a long time before it is not subsidised, if ever.

I am not normally a pessimist, but I think the damage this ban has done – I can see it is keeping prices at an artificially low-level, and I don’t think we will ever get out of subsidies. I don’t see how seal hunting could increase rapidly because we wouldn’t be able to give them more money.

Why, if there are no profits, is there still an interest in manufacturing and exporting these products?

If the government could get to pay fewer subsidies, it would be a big difference if we could talk only 80% or 60% subsidies. There is definitely a “profit” so to speak to be gained.

But also, in Greenland what you can do for a living is still rather limited. You can do fishing, and hunting and a few odd jobs here and there, like anywhere else – but those are still the two primary jobs you can have.

Having the right to hunt taken away from you is really devastating. Especially some of the more isolated settlements, they are still dependent 100% on seal hunting.

Politically, can Greenland ever become independent?

The Danish government gives 3.6b DKK (about half a billion €) to the Greenlandic government. If the country can become independent? I am sure that it can, and it already has a lot of self-government, but I think they’re struggling like any other Inuit community with problems like the level education before you can fill all the top positions in your country with your own people. This is still an issue in Greenland, but compared to other Inuit areas it has come a very long way.

They have a system in place. What they gained in 2009 with self-government is a very big step because it allows them to take home areas whenever they want, for instance, the judiciary is still in Denmark, but they’re talking about taking that back. It opens an opportunity for Greenland to take it step by step rather than doing, let’s say, a Brexit, where you have to leave overnight.

That’s step one for Greenland, and everything we talk about is how can we become better and trade more with other countries?

Up until recently, our main and only trading party was Denmark, but we are opening up trade with the States, with Canada, and opening up freight routes.Trade and exports is the one way in which Greenland can grow into independence, and that’s why they’re protective about keeping their proficiency in seal hunting as well. 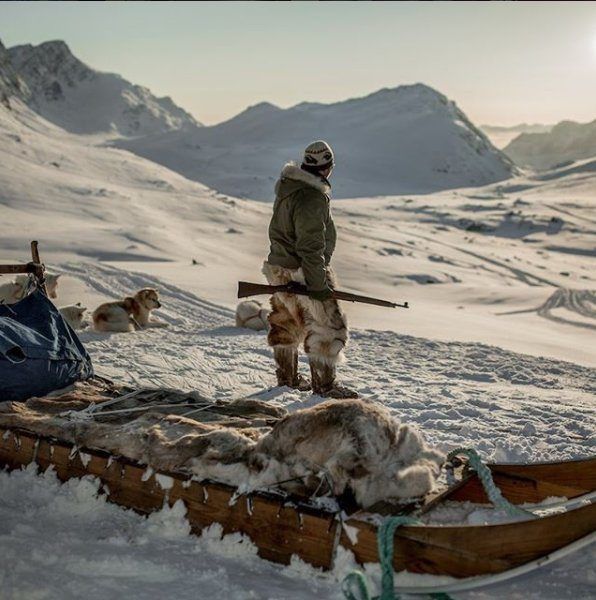