November’s update to the bank’s lending criteria means that the EIB will no longer fund fossil fuels that do not include some form of carbon capture. That is because the Luxembourg-based lender has pledged to align its business with the Paris Agreement and up its green investments.

Building support for the EIB’s new tack was a long, drawn-out process and the eventual compromise still prompted objections from certain countries because of the review’s stance on fossil fuels and nuclear power.

An agreement looked in serious doubt late last year after the bank, faced with objections from Germany in particular, postponed a vote on the new policy. But EIB Vice-President Andrew McDowell managed to steer a deal over the line.

In an interview with EURACTIV at the bank’s Brussels office, McDowell insisted that the freshly-inked review puts the EIB on track to meet its goal of making its lending activities compliant with the Paris Agreement.

“Obviously we’ve made this commitment that by 2025 one half of our lending will be for climate action and the other key environmental objectives set out under the new EU taxonomy,” McDowell explained.

The taxonomy is a new set of criteria that define what is and, more importantly, what is not a green investment. Final approval is still needed on the agreement.

Fifty percent of the EIB’s lending will be taxonomy-proofed by mid-decade but that does not mean the other half will be allowed to undermine those investments.

“All of the rest of our lending will at least do no harm and be consistent with the Paris Agreement. Even if it’s not scored as being climate action, it will be Paris-aligned,” McDowell reiterated.

The Irishman also confirmed that tweaks to policy will not stop at energy: “We’re going to review all of our lending, to see what it means about our eligibility, to make sure what we’re financing is not inconsistent.”

Transport is likely to get the review treatment in the near future, a course of action confirmed by bank President Werner Hoyer in January. However, officials are also keen to stress that any update will involve a long consultation period and in-depth assessment.

Environmental groups insist that the lender cannot claim to be the EU’s climate bank while it also finances airports and motorways with millions of euros.

Energy policy was first to go under the microscope because the EIB was able to see what direction the EU intended to move in after the European Commission published 2016’s Clean Energy Package.

New rules and targets for renewables, energy efficiency and emissions provided the bank with enough information to propose financing tweaks and make its fossil fuels pledge.

McDowell explained that clear policies are an absolute prerequisite for any changes to the way the EIB does business and that November’s compromise includes a commitment to review energy lending early in 2022.

Green groups largely welcomed the updated policy but were dissatisfied by what they saw as loopholes in the fossil fuel phase-out. McDowell acknowledged that criticism but insisted that “the fast-moving area” of natural gas markets means changes can still happen.

“The Commission is talking about a new gas decarbonisation directive. So if there is new information available to us in a couple of years on what the overall EU policy is when it comes to gas, then we’ll adapt and align our policies to that.”

A matter of trillions

The updated energy policy also comes with significant financial clout: the EIB announced in November that it would aim to mobilise €1 trillion in green investments over the course of this decade.

In January, the Commission made a similar pledge under its Sustainable Europe Investment Plan (SEIP), where the EU’s executive branch intends to unlock €1 trillion in order to pay for its list of Green Deal policies.

The Commission intends to pull off that feat by allocating roughly €500 billion from the EU’s long-term budget and topping it up with investments generated by its InvestEU programme.

But the two trillions have prompted some confusion as to how much money is actually up for grabs over the next 10 years. McDowell explained that there is indeed overlap between the two plans.

“The Commission has also set a target of a trillion euros but it’s like a Venn diagram: there are separate and shared areas. We’re still working on the overall figures and perhaps a cumulative figure of what the two will put together.”

He added that because the EIB will implement 75% of InvestEU, it is counted within the bank’s trillion and that the EU executive will do the same with its numbers.

Part of the bank’s money will go towards helping those who want financing to actually access it, in what is known as technical assistance. Projects have sometimes in the past struggled to get their hands on money simply due to lack of know-how.

“One thing we’ve committed to is greater provision of advisory support for project planning and implementation. Particularly in countries that are further behind in the energy transition. That’s a big challenge for us, organisationally,” McDowell acknowledged.

Carbon-intensive countries like the Czech Republic and Poland can also look forward to a higher level of financing. Normally, the bank sets an upper level of 50% but that will rise to 75% for a group of 10 member states.

Upping the amount of advice and cash it doles out does not mean the bank will be letting standards slip. The EIB enjoys triple-A rated status largely due to its strong track record of leveraging investment, which it does at an average of €1 to more than €2.

“It cannot be left up to the Commission or the bank to invent projects where there are none. We have said that there is a very large amount of capital for climate projects. But like any financial institution, we can only invest in projects that are financially sustainable.”

The United Kingdom’s exit from the EU also means that it is no longer a stakeholder in the bank. Its investment will be returned gradually and a recapitalisation agreement means the remaining 27 countries will fill the hole that is left.

McDowell admitted that before the deal was struck, the bank was unsure about how ambitious its investments could be in 2020, given that the UK’s withdrawal would have lowered its maximum level of lending by €100 billion.

The vice-president also said that the EIB would miss the kind of energy projects and expertise the UK provided. “We’ll miss their position on issues like energy and climate, they voted for the energy lending policy and were strong advocates for it throughout.” 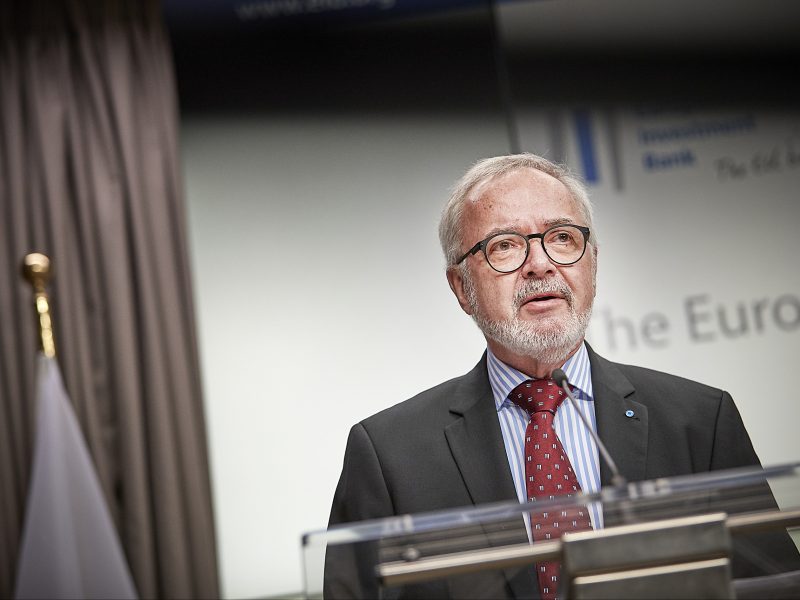