“This is Europe’s man on the moon moment,” the German Christian-Democrat said as she unveiled her much-anticipated European Green Deal on 11 December.

Climate change “is an existential issue for Europe – and for the world,” said the 61-year old former German defence minister after winning a confirmation vote in the European Parliament in November.

“We are in a climate emergency,” added Frans Timmermans, a former Dutch foreign minister who is now von der Leyen’s second-in-command, in charge of steering the Green Deal.

Responding to critics who said the Commission was going too far too fast with plans to cut greenhouse gas emissions, he said Europe had no choice.

Climate change is “like a comet” threatening to hit the earth in 30 years’ time, Timmermans told an assembly of local representatives in December. “It’s not just nice to do, we need to do it,” he stressed. 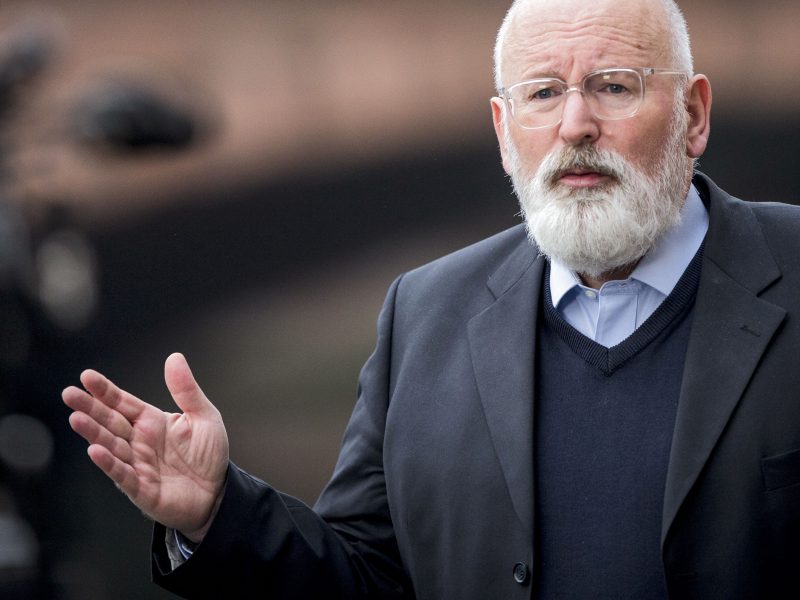 Until then, such supercharged rhetoric about climate change was unheard of in Brussels – at least at the highest level of the European Commission.

But good words are not enough and Europe as a whole now needs to deliver.

The good news is that the Commission is not alone in seeing global warming as an existential threat. The European Parliament too has stepped up the rhetoric, voting a resolution in November declaring a “climate emergency” in Europe.

The green honeymoon could be short-lived, however. Many hurdles lie ahead in 2020, first among which is timing, with the next UN climate summit, COP26, due on 9 November.

“This is the year the EU has to play according to the international timeline,” said Quentin Genard from E3G, a climate think tank. “We expect to see a new wave of more ambitious 2030 plans from across the world, and the EU can lead that charge and become the geopolitical actor it aspires to be,” he told EURACTIV.

By the time COP26 opens in November, the EU is expected to come up with “at least a unified message” about its increased climate target for 2030, E3G says. This means the Commission needs to start the process early in the year in order for all EU countries to endorse a common position.

But critics say the Commission’s timeline is too loose. “Tabling a new, substantially increased 2030 climate target by summer 2020 would leave very little time for EU member states to negotiate and endorse it in time,” said CAN Europe, a green NGO.

“Now, EU member states have a big responsibility to agree on a much higher 2030 climate target at the European Council in June 2020,” said CAN Europe’s director Wendel Trio.

According to Genard, the actual “deadline” to pull that off will come in September with the EU-China summit. If Europe can’t agree on an updated climate target by then, the likelihood is that COP26 will end in failure.

In the absence of US leadership on international climate diplomacy, “all eyes are on Europe and whether it can bring the world’s biggest emitter – China – along with it,” E3G said in a briefing note.

“If successful, the EU-China summit could become the inflection point in next year’s climate calendar: it will pave the way for COP26 in Glasgow, the global temperature check on climate action,” E3G said.

Yet, getting that achieved on time will be no small feat, mainly because of reservations from Eastern EU countries, many of which are still heavily reliant on coal and face a bigger challenge at decarbonising their economies.

Poland refused to sign up to the EU’s 2050 goal at a summit in December, saying it needed more guarantees on funding before agreeing to Europe’s new climate neutrality objective. So reaching agreement on a new 2030 climate target in less than six months could prove even more challenging.

The issue will come back on the leaders’ agenda in June, after the Commission unveils its €100 billion Just Transition Mechanism on 8 January, aimed at bringing all regions on board, including Poland’s coal-intensive regions.

Whether that will prove sufficient to convince Poland and other reluctant Eastern EU countries remains to be seen. But the new Commission president showed confidence this could be done.

“It is acceptable for a country that has come a long way and has many coal-dependent regions, that it needs more time to go through the details. But it will not change the timeframe of the Commission,” von der Leyen said after the December summit.

2 responses to “2020: A test year for Europe’s much-vaunted Green Deal”