Albania looks at gasification with a €4 billion price tag 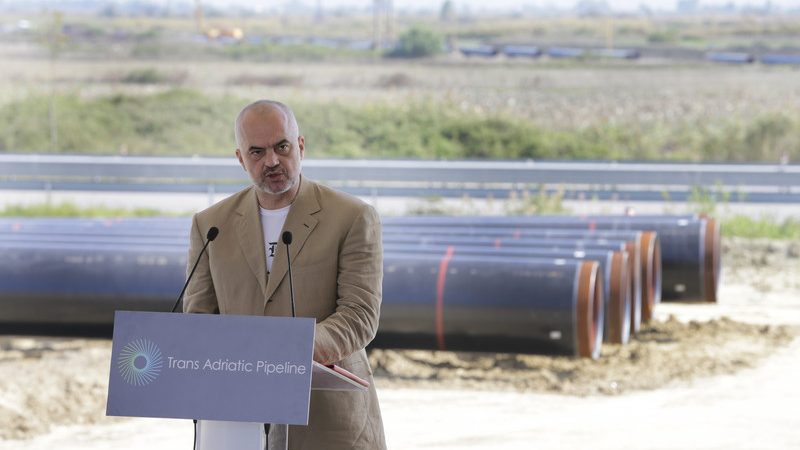 epa05564887 Albanian Prime Minister Edi Rama speaking during the inauguration ceremony for the starting of work to install the first pipe of the TAP project near Fier, Albania. EPA/ARMANDO BABANI

Amid the global energy crisis, exacerbated by the war in Ukraine, Albania is working to diversify its energy sources, including by introducing gas and wind power, with the former set to cost up to €4 billion to implement.

Albania currently generates almost 100% of its electricity from hydropower plants. This energy cannot be stored, so it is sold to other countries during the spring and summer when production is higher. But then, come winter, Albania has to purchase electricity from neighbouring countries to meet demand.

This may soon no longer be needed after the government announced plans to gasify the country. The Commission for Industrial Activities (KVP) said that a total of six projects would need to be implemented in Albania to achieve efficient distribution of natural gas.

In particular, these include expanding the Ionian-Adriatic pipeline and the development of the Vlora thermal power plant.

Minister of Energy Belinda Balluku spoke of the country’s gasification in parliament, stating that works are underway to complete two large projects that will help the country’s transition to gas.

“For two years we are completing two major projects and gasification of the country. It’s a project with America’s biggest companies. They will finish it in record time. Not only the ignition of TEC, but also the gas pipeline from the port of Vlora to the TAP area in Seman. It will start to be distributed either in Italy or in countries like Bulgaria,” she said.

According to stakeholder estimates, this so-called “gasification” has an estimated price tag of €4 billion.

But the use of gas, especially by countries that are not currently dependent on it, has raised concerns from environmentalists. One example is a recent letter to the European Commission from civil society and environmental organisations asking them to stop funding gas projects in the region and instead focus on sustainable energy solutions.

“We, therefore, request that the European Commission refrain from promoting new gas infrastructure in the Western Balkans, whether in public statements or its investments such as those under the Economic and Investment Plan. Instead, we ask the Commission to redouble its efforts to encourage genuinely transformative investments which are receiving insufficient attention in the Western Balkans,” the letter reads.

They fear that money will be wasted on expensive, time-consuming projects that are not sustainable and will lock in the region to gas, as the rest of Europe wants to move towards renewable energy.

Other concerns include presenting Azeri gas as an alternative.

Azerbaijani gas is problematic as the ruling regime grapples with corruption issues at a high level, particularly involving gas deals.

Prime Minister Edi Rama visited Azerbaijan this week to discuss further steps in the energy field, including supplying gas to Albania and the tasking of a technical team to start working on the issue.

“This is a very good sector for cooperation, with a great potential to grow even further. Our representatives are holding meetings on a broader portfolio of our cooperation in the field of energy, which includes natural gas, transit supplies, and electricity”, Azerbaijan’s President Ilam Aliyev said after the meeting.

Serbia is also looking to receive gas from Azerbaijan in the future, according to Serbian Mining and Energy Minister Zorana Mihajlovic.

There are currently at least 13 solar projects in the pipeline with a capacity of 1.24 GW between them. In addition, a recent wind farm proposal has been given strategic investment status in the country. If built, the project will have a combined capacity of 234MW.