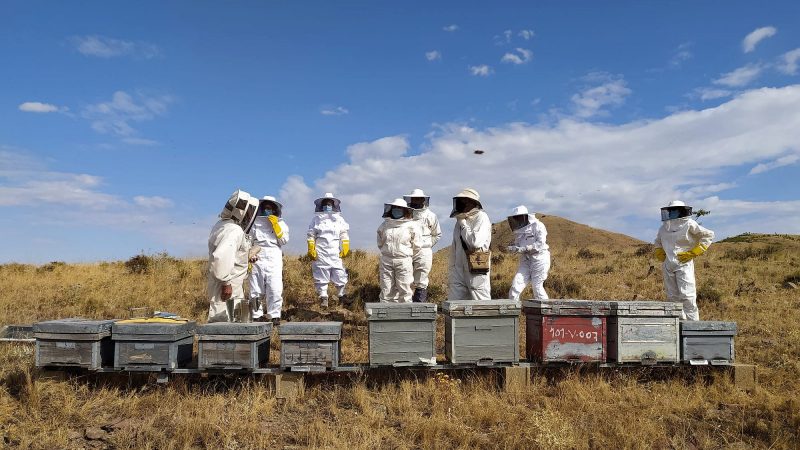 You can also read this article in Spanish, Polish, Bulgarian, Romanian, and Croatian.

More and more city dwellers in Spain are looking for ecological and sustainable alternatives to city life, to reconnect with nature and escape from polluted urban environments and unhealthy crowded spaces, particularly in the wake of the coronavirus.

Many small Spanish towns are seeking to attract those disappointed by the rush of “digital progress”, and help to halt rural depopulation, the “España vaciada”(“emptied Spain”). To achieve that goal, a range of projects are underway across the country.

Miguel Ángel Casado, an enthusiastic beekeeping expert, took it upon himself to streamline the process, which promotes sustainability and biodiversity, helps keep small villages and regions from emptying out and creates jobs at the local level.

Casado is also the mayor of Hombrados, in the province of Guadalajara, which has a mere 32 inhabitants. But he trusts that “more people will arrive to settle down” when the health situation allows.

Small towns like Illueca have seen an outflow of their local population, particularly since the 2008 economic crisis, which has severely punished one of its main local industries: footwear.

Many people have returned to rural areas in the last few years, but this “renaissance” of the rural world requires the creation of jobs to be sustainable and attract young people.

Casado’s “sustainable beekeeping industry” projects are located in several regions between Zaragoza and Guadalajara. He is also a teacher and brings his academic beekeeping know-how where the land is most favourable and where he is asked to come and help promote local biodiversity.

His crusade for “bio-apiculture” has led him to train students, mostly young but also middle-aged and older ones, about beekeeping, which, he stresses, “contributes decisively to promoting biodiversity”.

The high value of small towns in times of pandemic

“With the impact of the COVID crisis, a lot of people are coming back to small towns and villages because they can live with less money and in a natural environment. In Hombrados, we have already received several requests from people who want to settle here permanently. They have cattle, goats. Others want to develop a project of ‘beekeeping and rural tourism’ in the region”, Casado told EuroEFE.

One of the activities developed in Hombrados is ‘honey from the ovens’, constructions made of adobe and tiles serving as surrogate hives for bees.

“This system would allow, for example, a family of five people to make a living here,” Casado explained.

Casado and his team started teaching new techniques in traditional beekeeping, an “academic subject” followed by about 20 students, aged between 14 and 18, at the vocational Training Institute ‘Sierra de la Virgen’ in Illueca.

“This year, despite COVID, we managed to develop it”, Casado said.

“Pupils are taught how to create their own beekeeping company, how to manage it, how to organise it, and which products a beehive produces. We teach them from the very basics to techniques of artificial insemination of the queen bee. In Spain, very few beekeepers teach this, apart from us”, he stressed.

Casado’s commitment is shared by Laura Provincial, one of the teachers at the Illueca Vocational Training Centre.

In the academic year 2019-2020, lessons were given on a regular basis. In Illueca, COVID-19 has not had a big impact so far. and they are optimistic about the future. 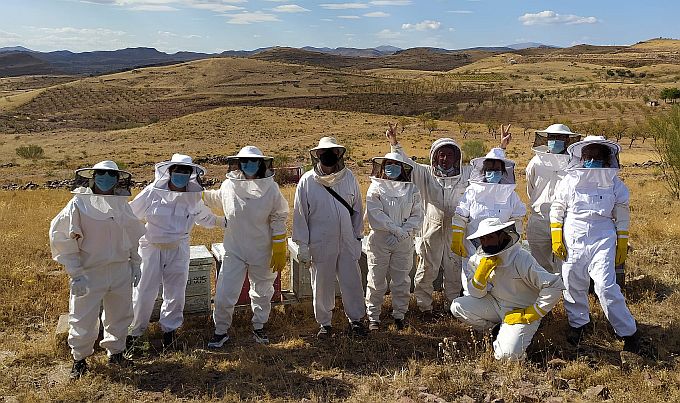 Participants in the 2019-2020 beekeping course in Illueca. Participants are teachers themselves in Vocational Training Centers in the Spanish region of Aragón. [Laura Provincial]

The centre offers “two training cycles: basic professional training in forestry and another, focused on the use and conservation of the natural environment”, Provincial told EuroEFE.

“We found that part of the official FP {Formacioan Profesional] teaching in the Aranda region paid a lot of attention to issues such as wood and biomass, but very little to beekeeping or obtaining products from the hive. We thought it was a good idea to differentiate ourselves from other educational centres and bet on beekeeping,” Provincial explained.

Students’ hopes are focused on beekeeping as a future permanent job

That attitude is shared by students, such as 18-year-old Álvaro Andaluz, who is currently taking the first course of “Aprovechamientos Forestales” (forest resource harvesting techniques).

“At first I didn’t even consider beekeeping as a job. For me, it was like a new and completely unknown world. Little by little, I learned more about it, thanks to Laura and my other teachers, and I ended up being very enthusiastic about it. Now I’m really thinking about working in the sector,” Andaluz told EuroEFE.

“Every morning on a school day, we usually start very early with the maintenance of the beehives, something essential, but we also spend many hours in the reforestation of the whole area,” he explained.

The enthusiasm among young people for jobs combining agriculture and nature is essential to ensure a generational renewal: in Spain and other EU countries, more than 90% of the farmers and stockbreeders are close to retirement, Efe agro has reported.

Beekeeping as a lever to promote greater biodiversity

One of the greatest benefits of sustainable beekeeping, says Provincial, is the enhancement of local biodiversity.

“Our project is cross-cutting: not only do we focus on forest exploitation, but, for example, instead of planting pine and holm oaks, which are already well known in the area, we propose to produce melliferous plants (linden, eucalyptus, hazelnut, oak, willow) and aromatic plants,” she explains. And all this, to boost the pollinating task of the bees.

“We set up apiaries to help pollinate flowers and therefore contribute to boosting biodiversity. When beehives are set up in places where there were none before, blooms are more intense, and with flower species that were not seen before. Bees are essential to biodiversity. I would like to recall a quote, attributed to Albert Einstein: If the bee disappeared off the surface of the globe, then man would only have four years of life left,” Provincial said.

Casado stressed that beekeeping can contribute decisively to “the return of nature to its normal cycle”.

“At the moment – and not only because of the COVID crisis – we see that the whole cycle of nature is unbalanced. Winters are no longer winters, spring is no longer spring, summer is no longer summer either. We have reached a point where we do not know what season we are in.  These are all clear signs of the dramatic reality of climate change”, he said.

Improving the variety of the local flora and fauna

“The area (of Illueca) where we have installed the apiaries is not barren but there is not much vegetation. There are a few rosemaries, brooms, and very little else. Our aim is to plant new native species there, adapted to the area. We are going to plant marigolds, thyme, rosemary, and lavender, and we will also cultivate some species of melliferous ornamental plants that contribute to enriching the area”, said Provincial.

This also “enriches the micro-fauna, which helps new pollinators to come to this area, and improves the crops and fruit trees around it”, she added.

To help keep this activity running, they have financial support from the Aranda region, with an annual grant for the FP courses, and the local council. And although the economic prospects are not favourable, they are hopeful of continuing at a good pace in 2021 and beyond, Provincial stressed.

However, organic beekeeping also faces threats. “Among the most serious are herbicides and pesticides, such as glyphosate and neonicotinoids. People are using too many poisons. We, along with other sectors concerned, are struggling against glyphosate,” Casado explained.

But Casado, Provincial and other collaborators are thinking of new ideas related to “beekeeping tourism”. In Hombrados, Casado plans to organise a tourist trail through the apiary areas, visiting the nearby Zafra castle and horse-riding green routes in the region.

“In addition to beekeeping, rural tourism will be soon our second big economic lever. Because of the COVID crisis, people are looking for green spaces. I call it ‘silent tourism’. People come to relax here, far away from the noise,” Casado said.

“Many people are returning to traditional ways of living. They have five or six apiaries, farm animals and vegetables for self-supply. In the end, this crisis has forced us to go back to the roots, to respect nature. At least it has that positive aspect,” he said.