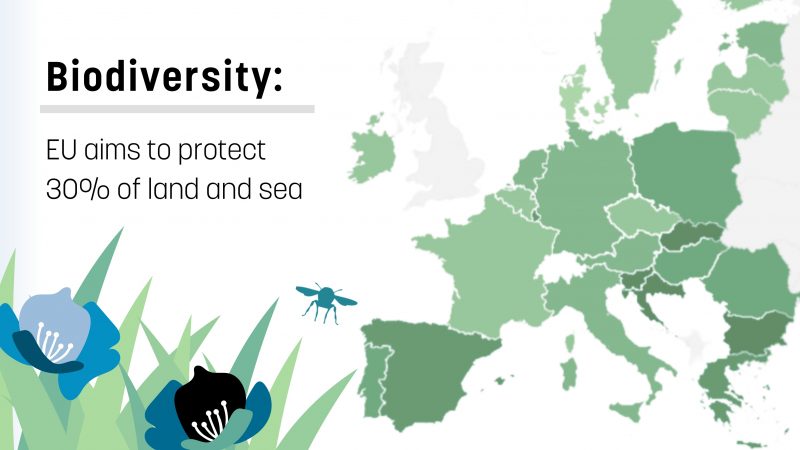 Biodiversity is in decline in Europe, with agriculture and climate change contributing to this. The EU plans to protect 30% of land and sea to stop this loss.

A UN summit in China, scheduled for May this year, will discuss global action on  biodiversity, with the European Union promoting the idea of a Paris Agreement for biodiversity.

The summit comes at a critical time for the world’s nature. Globally, scientists have warned that one million out of eight million species are threatened with extinction.

In Europe, the latest State of Nature report, published in October 2020, warned that biodiversity is in critical decline. Produced by the European Environment Agency, the report showed that over 60% of species have a “poor” or “bad” status, with the most endangered being fish and amphibians.

Protecting 30% of land and sea

The European Commission aims to tackle this with its biodiversity strategy, which is due to unlock €20 billion of funding per year for nature protection.

It also aims to legally protect 30% of land and sea by 2030. However, only 14 out of the 27 EU countries signed up to this target at the One Planet Summit in January.

Biodiversity protection in the EU is currently dealt with under the Natura 2000 conservation programme, which covers around 18% of EU land and 10% of sea.

Twenty-one of the 27 EU countries are coastal, with different levels of Nature 2000 protected space. When including the UK, the area of sea under the control of EU countries is larger than the total land of the EU.

In the diagramme below, EU member states range on how much land they protect through Natura 2000. Slovenia and Croatia protect nearly 40% of terrestrial land while Denmark, Sweden and Latvia lag behind with around 10%.

But biodiversity is under increasing pressure from climate change, pollution and agriculture. In Europe, 1,677 out of 15,060 species assessed are threatened with extinction.

The EU habitats directive protects 1,389 species and 233 habitats. However, member states only reported improvements for 198 species and habitats, according to the State of Nature report.

The progress was not enough to meet the EU biodiversity strategy’s 2020 goals – neither the birds directive nor the habitats directive have reached their 2020 target. So the ambitious targets of the 2030 strategy must be accompanied by strong implementation to be effective, according to the State of Nature report.

Biodiversity loss is a serious concern both for the environment and for the economy. Ecosystem services delivered by biodiversity, like crop pollination, water purification, flood protection and carbon sequestration are worth an estimated $125-140 trillion each year – more than one and a half times the global GDP, according to the OECD.

Pollinators are also essential to the environment and the industries based on it. Less pollinators mean many plant species would decline or vanish altogether. 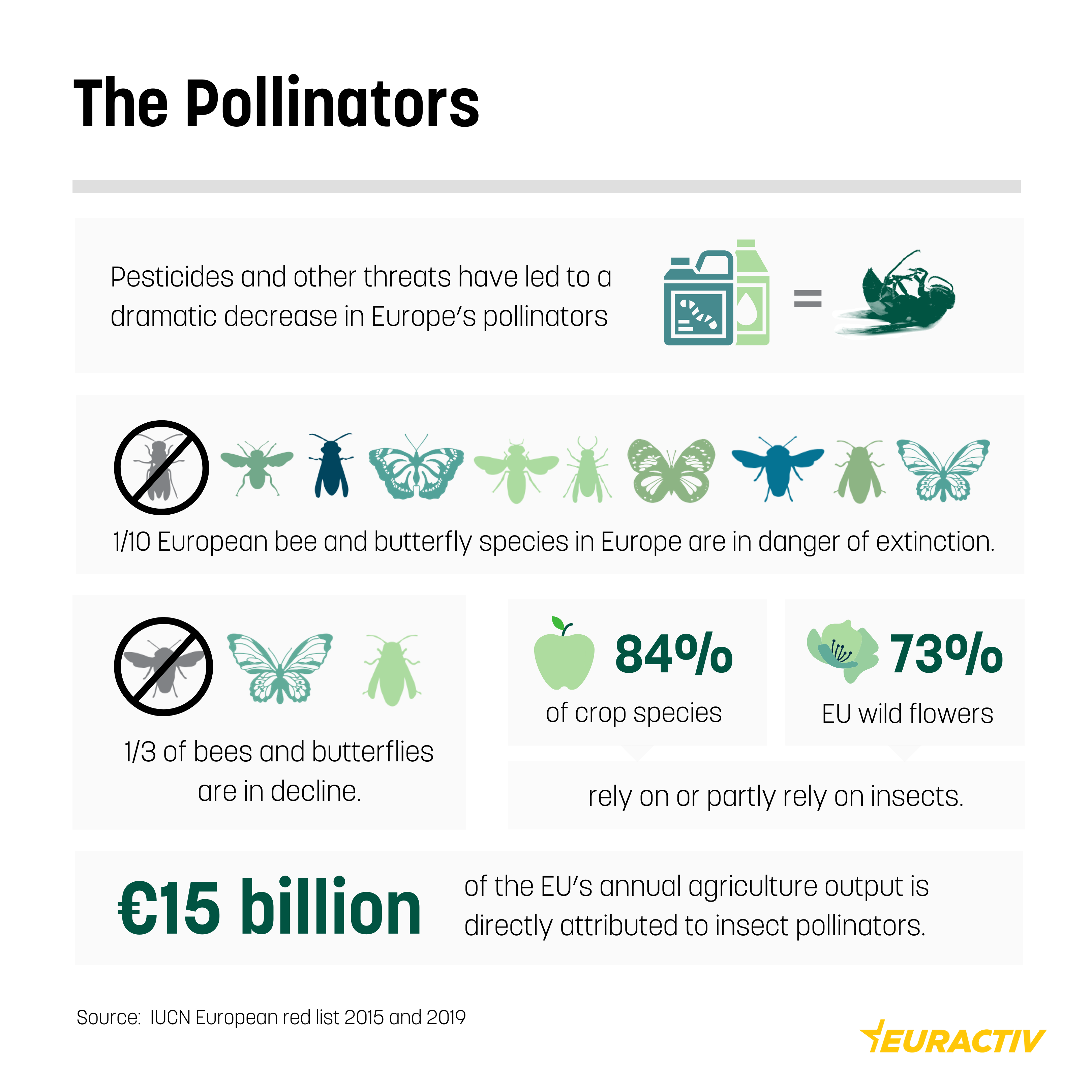 In Europe, the main pollinators are bees and hoverflies. However, pesticides and other threats have led to a dramatic decrease in their numbers.

“Our quality of life – and our future – depends on the many services that nature provides for free. Pollination is one of these invisible, but invaluable services, so it is very worrying to learn that some of our top pollinators are at high risk,” said Virginijus Sinkevičius, the EU commissioner for environment, oceans and fisheries.

“If we don’t address the reasons behind the decline in wild pollinators, and act urgently to stop it, we and our future generations will pay a very heavy price indeed,” he added.

There are 67,000 individual pressures on biodiversity, according to the State of Nature report. The most reported pressures on habitats and species come from agriculture. Urban sprawl, leisure activities, unsustainable forestry and pollution also impact nature.

“Despite significant efforts by member states and some improvements, biodiversity in the EU continues to decline and faces deteriorating trends from changes in land and sea use, overexploitation and unsustainable management practices, as well as water regime modification, pollution, invasive alien species and climate change,” according to the State of Nature report. 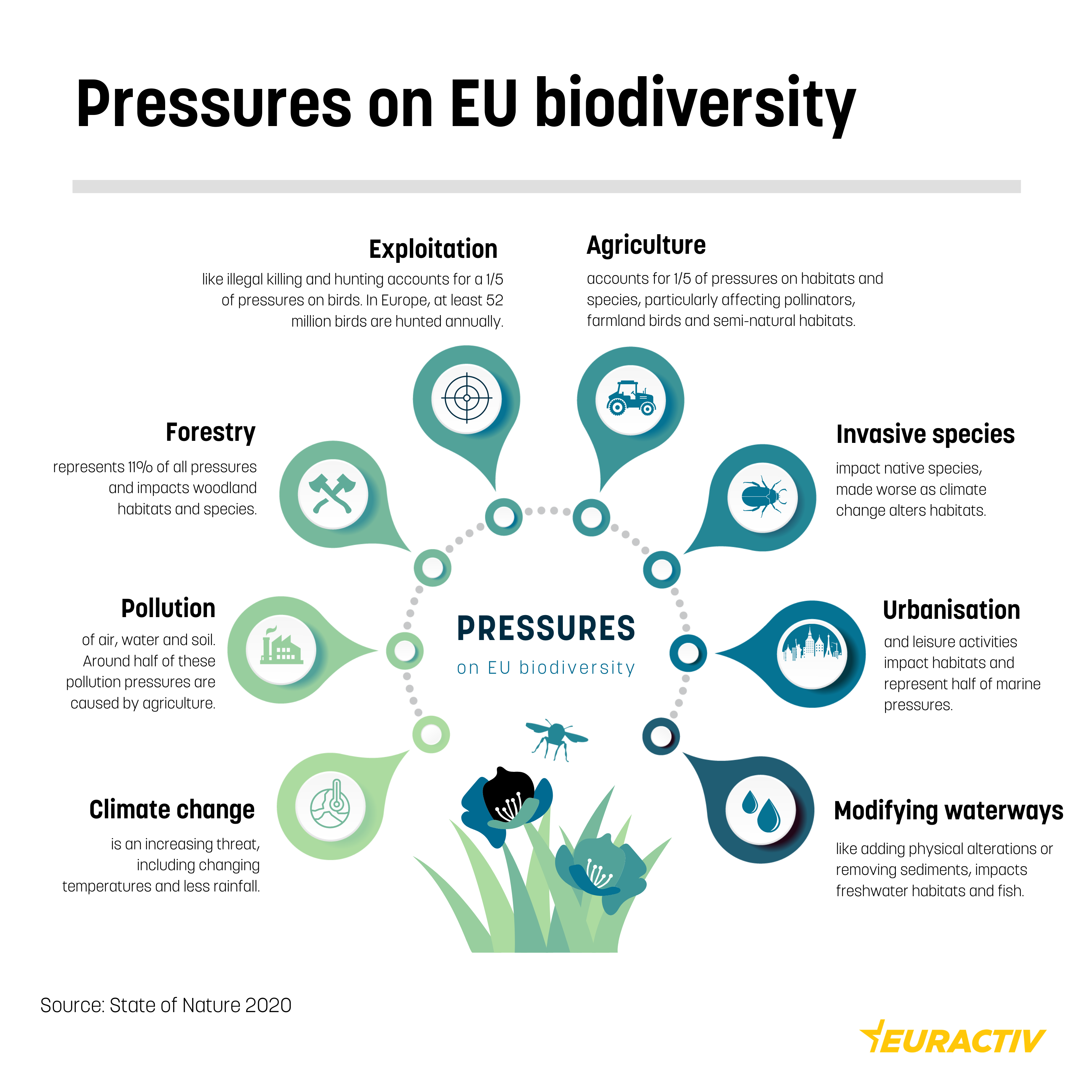 2 responses to “Biodiversity in Europe: EU aims to protect 30% of land and sea”