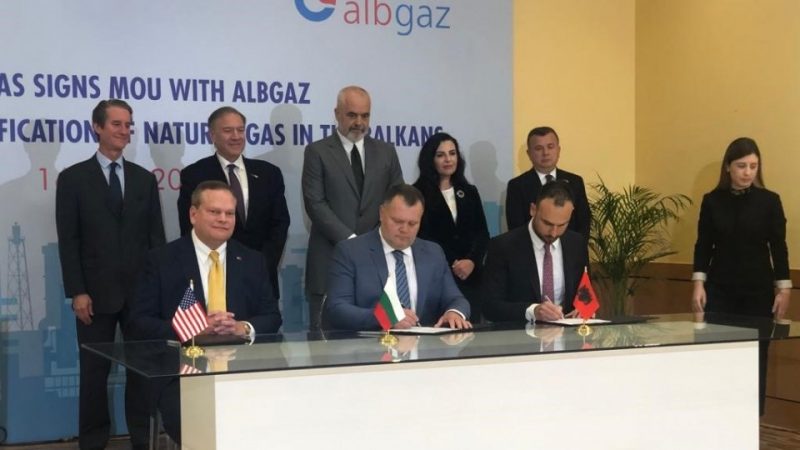 The agreement was signed between Overgas (Bulgaria), Linden Energy (US), and Albgaz  (Albania), with the former expressing interest in receiving gas from the so far non-functioning terminal in Vlora. From left, standing: Matthew Bryza, Mike Pompeo, Edi Rama. [Overgas website]

A Memorandum of Understanding for the gasification of Albania was signed this week between three companies in the presence of Prime Minister Edi Rama and former US Secretary of State Mike Pompeo, signalling the start of a new potential natural gas corridor between Albania and Bulgaria.

The agreement was signed between Overgas (Bulgaria), Linden Energy (US), and Albgaz  (Albania), with the former expressing interest in receiving gas from the so far non-functioning terminal in Vlora.

Minister of Energy Belinda Balluku, who was also in attendance, said that a big step was being taken, and other regional countries have also expressed interest.

“We are taking a big step by turning it from a local project to a regional one. In recent weeks, after announcing our efforts with our American partners, we have expressed a desire for cooperation from North Macedonia and Kosovo to become part of this project,” she said.

Matthew Bryza, a member of the board of Overgas and a former US diplomat told Bulgarian daily SEGA, “the aim is to create a new energy corridor with the efforts of private companies and strong support from the Albanian and US governments to help all Balkan countries, as well as Ukraine and Moldova, reduce their dependence on Russian natural gas.”

Pompeo was quoted as saying that the Balkan region is one of the most vulnerable to the lack of energy diversity, and the signing of this memorandum of understanding is “a strong step in the right direction.”

“At a time of great uncertainty in the European energy market, I am proud to be part of a team working directly on this issue,” said the former US Secretary of State, who is now chairman of the Linden Energy Advisory Board.

Overgas is Bulgaria’s largest private gas company and is headed by Sasho Dontchev. The company manages more than 2400 km of gas pipelines and provides gas to over a quarter of a million Bulgarian households and 60,000 factories.

Rama wrote on Facebook that the signing of the agreement by Albgaz, a 100% state-owned entity, is another important step towards fulfilling the vision of the “Albania2030 net energy exporter.”

Albania currently generates almost 100% of its power from hydropower plants. This energy cannot be stored, so it is sold to other countries during the spring and summer when production is higher. But then, come winter, demand means the state has to purchase fossil fuels from neighbouring countries to meet needs.

But the government has recently announced plans to gasify the country. The Commission for Industrial Activities (KVP) said that six projects with a price tag of over €4 billion would need to be implemented in the country to achieve efficient distribution of natural gas.

In particular, these include expanding the Ionian-Adriatic pipeline and the development of the Vlora thermal power plant.

The power plant in Vlora sits on one of the region’s most pristine beaches. Since its construction and completion in 2005, it has not generated a single watt of power and has been plagued by issues with its cooling system.

In February 2022, the US-Italian consortium Excelerate Energy-Renco announced they would lead the plant. Renco is involved in consulting, engineering and construction within the energy sector, while Excelerate Energy has several floating LNG terminals.

Several floating gas terminals will be set up to work with the existing power station in a project that those involved say will open up Albania to be a key player in gas across the region.

But the use of gas, especially by countries that are not currently dependent on it, has raised concerns from environmental stakeholders. They fear that money will be wasted on expensive, time-consuming projects that are not sustainable and will lock in the region to gas, as the rest of Europe wants to move towards renewable energy.

Albania does not currently use gas for energy use either in the public or private sector.