What appears to be of greater interest to the German industry is the Commission's promise to revise EU state aid law and its focus on "industrial alliances". This is likely to please Economics Minister Peter Altmaier of the Christian Democratic Union (CDU). Last year, the minister had already presented his vision for major European mergers, which he called "champions". EPA-EFE/HAYOUNG JEON

The Commission presented its industrial strategy on Tuesday (10 March), outlining measures aimed at safeguarding the competitiveness of European companies as they invest in technologies to comply with the EU’s 2050 climate neutrality objective.

But environmentalists were sceptical that the EU initiative will make a difference. Agora Energiewende, a climate think-tank, said Germany should adopt its own measures regardless of the EU industrial strategy.

Indeed, the Commission document contains few new instruments to finance green investments, saying only that Brussels intends to update EU competition rules and state aid law by the end of next year in order to support the green transition.

Agora Energiewende says this could eventually pave the way for “differentiated agreements” with some industrial sectors like steel, cement or chemicals. Based on a fixed carbon price, those would make investments in clean technologies more attractive, Agora said, citing hydrogen for the steel industry as an example.

However, there is nothing in the Commission’s industrial policy proposal that would allow such industry-wide agreements to take place at this stage.

“As long as there is no such mechanism at EU level, Germany should take the lead,” Agora director Patrick Graichen told journalists in Berlin on Tuesday (10 March).

In Germany, where basic industries emit a good fifth of greenhouse gases, ways must be found to finance the decarbonisation effort. In this decade alone, more than half of steel and chemical plants will have to be replaced, according to estimates.

Investment costs for new gas-based steel blast furnaces alone could amount to €8 billion, according to Agora Energiewende’s estimates. Operational costs are also set to rise: with a carbon price of €30 in 2030, steel production would cost around €500 million more than today, the think-tank points out.

The same applies to the cement sector, where almost a third of plants will have to be replaced. And if they were all to be equipped with CO2 capture and storage technology, this would trigger additional annual costs of €400 million, Agora says.

At the same time, the clock is ticking and rapid emission cuts must be made in this decade if Europe wants to stay on track with the 2°C warming target of the Paris Agreement and reach climate neutrality by 2050.

“In view of the decades-long lifetime of many plants, investments in climate-friendly technologies would have to be made by 2025 at the latest so that we no longer operate fossil plants in 2050,” said Graichen.

But investing in climate-neutral steel plants based on green hydrogen is hardly worthwhile at the current carbon price, which currently hovers around €25 per tonne of CO2. In steel production alone, the carbon price would have to rise to between €100 and €150 to make fossil fuel processes unprofitable, Agora says. 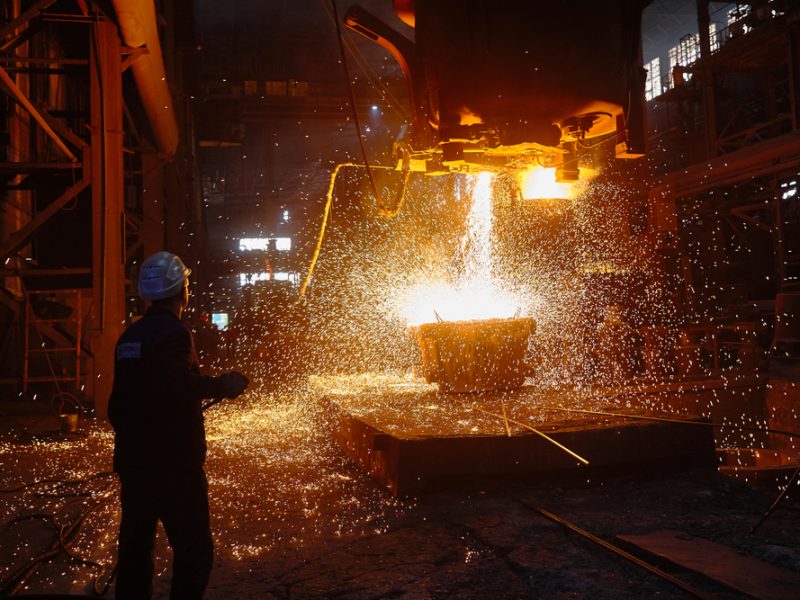 Germany’s energy-intensive steel industry needs to reinvent itself so that it can meet European climate targets and remain competitive. However, there is still a long road to go before the sector goes green. EURACTIV Germany reports.

The industry is therefore pushing for government support to make the business case for climate-friendly technologies.

One way of doing this could be to introduce a minimum quota for hydrogen and a voluntary commitment by the state to use climate-friendly materials in major construction projects, according to Agora Energiewende.

To this end, Germany could impose a levy on products such as steel, aluminium, cement and plastics and thus finance the differentiated agreements with industry. This way, companies would be subsidised by the state as long as the agreed carbon price is below market price.

However, the EU’s industrial strategy makes no mention of such “differentiated agreements”.

Instead, the Commission repeats its intention of presenting a carbon tax proposal some time next year. Championed by France, the carbon border tax idea was cautiously taken up by German Chancellor Angela Merkel but continues to be controversial in Germany because it is difficult to implement and risks slowing down the country’s export-driven economy.

In a statement on Tuesday, the German Chemical Industry Association wrote that a carbon border tax would “not be a sensible lever, but would rather harm sustainable development”. Instead, the free allocation of emission trading certificates and electricity price compensation have to be maintained, it said.

Clearing the way for European champions?

By contrast, what appears to be of greater interest to German industry is the Commission’s promise to revise EU state aid rules and focus on “industrial alliances” like  the new “Clean Hydrogen Alliance”.

Such alliances have proved their worth in the case of battery and plastic production and could drive the creation of a hydrogen market, the Commission’s industrial strategy states.

Together with the economics ministers of France, Italy and Poland, Altmaier approached EU Competition Commissioner Margrethe Vestager in February, asking her to reform EU competition law.

The Danish woman had long resisted revising EU merger rules but confirmed the prospect of such a reform for the first time in December.

Next year, she intends to present proposals to this effect.