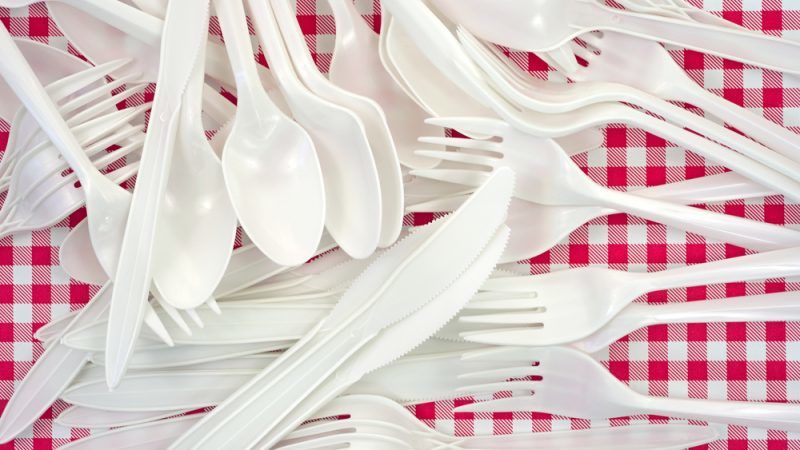 Plastic throwaway cutlery is one of the items the Commission wants to ban. [Shutterstock]

Nearly 85% of all ocean litter is plastic and half of that is made of throwaway items. That is why the Commission’s new proposal targets items like plastic straws, cotton buds and cutlery.

The EU executive identified those items, as well as plates, beverage stirrers and sticks used to support balloons, as the most obvious products where “suitable and more sustainable alternatives are readily available”. As such, market restrictions will be placed on them.

A report by NGO Seas At Risk showed how EU consumption of throwaway products has threatened to spiral out of control due to lack of proper curbs, with the EU28 discarding 580 billion cigarette butts, 46 billion beverage bottles and 36.4 billion straws every year.

However, “tobacco product filters” will only be subject to ‘polluter pays’-style extended producer responsibility schemes and public awareness raising initiatives.

More subtle measures include labelling requirements that will better inform consumers, stricter design criteria and the promotion of extended producer responsibility schemes, where manufacturers will be obligated to pay a part of recycling costs.

The proposal also focuses on fishing gear, as nets and traps make up 27% of plastic marine litter. The Commission hopes that raising awareness in the fishing industry will help anglers and trawlers recover their equipment once it reaches the end of its life-cycle.

EU countries would also have to achieve a “significant reduction” in the consumption of other items where there are no other options available. This wording has been criticised by green NGOs, who warn that it leaves member states too much room for interpretation.

Ahead of today’s presentation, Friends of the Earth Europe campaigner Meadhbh Bolger said a lack of “specific EU-wide reduction targets for food and beverage containers” could be a “potential downfall” and that a revision should be made after three years and not the planned six.

Commission Vice-President Jyrki Katainen explained during the release of the proposal though that a separate collection target for single-use bottles will indeed apply in 2025, equal to the “median level of collection rate of existing (…) bottle deposit refund schemes in the EU (90%)”.

Members of the European Parliament and the EU Council will now be able to amend and tinker with the text in a process that is almost certain to last until after the United Kingdom leaves the bloc, which means it will not be transposed into British law.

UK environment minister Michael Gove has been urged to follow Brussels’ lead and ensure Britain also tackles plastic pollution. Green MP Caroline Lucas told The Guardian that “single-use plastics need to be eradicated” but warned that the government has only given “vague” promises so far.

New research done by campaign group Corporate Europe Observatory (CEO) said that industry interests had monopolised too much of the Commission’s time during the build-up to the release of the Plastics Strategy in January.

CEO released figures on 22 May that show 92 lobby meetings on the Strategy took place in 2017 and that 76% were with individuals representing corporate interests while 17% were with NGOs. The remaining 7% were with other organisations.

Although the EU executive has made no secret of the fact that bringing plastic-use under control will require heavy involvement from industry, CEO criticised the Commission for choosing to reach out to lobby groups in order to try and secure voluntary commitments.

The campaign group branded those commitments “lacklustre” and NGO Zero Waste Europe said after the Strategy’s publication that voluntary agreements “should in no way replace political action”.

But that has not stopped the commitments from being made. Industry group Plastics Europe’s 2030 pledge includes confirmation that European plastics manufacturers are targeting a 60% recycling rate for plastic packaging by 2030.

The world’s largest food and beverage company, Nestlé, announced in April that it wants all of its packaging to be recyclable or reusable by 2025. Global hotel operator Hilton also pledged last week to eliminate plastic straws from all of its 650 properties by the end of 2018.

That commitment will remove more than 5 million straws and 20 million plastic water bottles per year. Hilton claimed that “laid end to end, the straws saved each year in [Europe, Middle East and Africa] would exceed the length of the River Seine”.

The Commission’s proposal adds to waste management rules that were rubber-stamped by the Council last Tuesday. It is the final step in revising existing laws, which include a municipal waste recycling target of 60% by 2030 and 65% by 2035.

Samantha Burgess, Head of Marine Policy at WWF European Policy Office, said: “We applaud the EU’s political response to the recent public outcry of the impacts marine litter has on the ocean. However, plastic in our ocean is a global issue that also demands a global solution. We encourage the EU and its Member States to support the United Nations Environment Assembly (UNEA) process to eliminate plastic leakage into the ocean and ask them to adopt a “Paris Agreement” for Our Ocean.”

European Green Party co-chairs Monica Frassoni and Reinhard Bütikofer, said: “We welcome the European Commission’s plan to severely restrict single-use plastics and reduce plastic pollution at sea.  We need to develop a consistent response that tackles plastics at the level of production as well as effective waste management.  The scale of the problem means that we cannot rely on individual European countries to take action and must instead find a Europe-wide response.

“The move to cut plastics is likely to receive strong backing in the European Parliament and we urge member countries to follow suit and back the proposals.  But, executive action alone is not enough.  We need a grassroots citizen’s movement capable of stepping in and driving change.  We believe the support is there, but we just need to organise effectively."

Alexandre Dangis, European Plastics Converter Director, said: "The timing is wrong. At a moment where the EU Commission is asking the industry to pledge or commit to more use of recycled plastics materials, it is also asking to ban certain recyclable products. This is a wrong signal, which will maintain the levels of landfill in the EU that we have today if European waste laws are not properly implemented. One could then argue whether the Commission is able to influence Member States on proper environmental behaviour, in line with existing Directives. Instead, the EU Commission is attacking a part of the industry by banning products”.