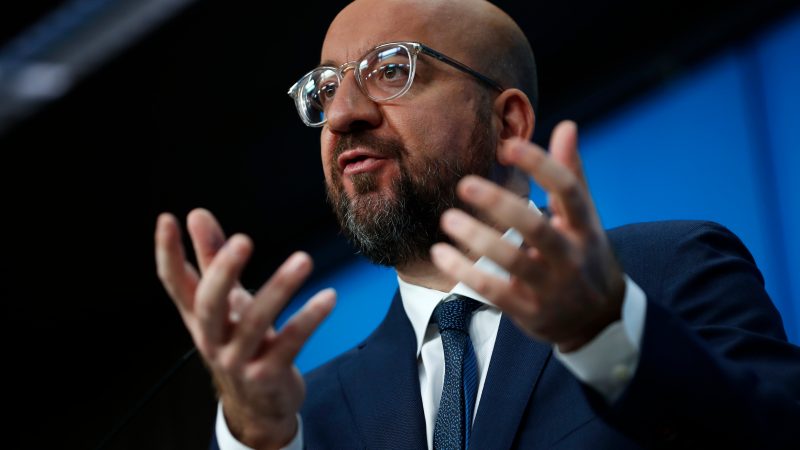 "An agreement on an enhanced emissions reduction target of at least 55% by 2030 is within our grasp,” said Charles Michel, the President of the European Council who chairs EU summit meetings. [EPA-EFE/Francisco Seco]

European Union leaders are set to endorse a 2030 target to reduce net greenhouse gas emissions by “at least 55%” during a two-day summit opening in Brussels today, according to draft conclusions seen by EURACTIV.

The outlines of an agreement on the EU’s 2030 climate target became clearer yesterday after Poland and Hungary got reassurances over a proposal linking the disbursement of EU funds with respect for the rule of law.

Warsaw and Budapest blocked the EU’s proposed €1.8 trillion seven-year budget and recovery fund last month because of rule of law provisions which they say is illegal.

Both governments are under investigation over restrictions to media freedom and the judiciary and could lose out on billions in green funding if EU sanctions were applied.

“An agreement on an enhanced emissions reduction target of at least 55% by 2030 is within our grasp,” said Charles Michel, the President of the European Council who chairs EU summit meetings.

“Work on the best way to get to this ambitious target is well underway. This would be a major achievement and would underpin our claim to play a leading role in fighting climate change,” he said in his invitation letter to EU leaders on Wednesday (9 December).

Draft summit conclusions say “the European Council endorses a binding EU target of a net domestic reduction of at least 55% in greenhouse gas emissions by 2030 compared to 1990,” and calls on EU legislators “to reflect this new target in the European Climate Law”, which should be adopted “swiftly” by the European Parliament and representatives of the 27 EU member states.

In wording aimed at placating Poland, the draft conclusions make ample reference to “fairness and solidarity” in achieving the EU’s climate goals, saying “the target will be delivered collectively by the EU in the most cost-effective manner possible”.

At a previous summit in October, Poland expressed concerns about the cost of the transition to a net-zero economy, saying “further analysis” was needed to assess the economic impact of upcoming legislative proposals on individual countries before it could endorse the objective.

With its electricity mix dominated by coal, Poland has a bigger challenge than other EU countries to decarbonise its economy, Warsaw argues, saying its national specificities need to be taken into account when drawing up future EU legislation.

The summit statement acknowledges this, saying: “The new 2030 target needs to be achieved in a way that preserves the EU’s competitiveness and takes account of member states’ different starting points and specific national circumstances.”

“We will raise our climate ambition in a manner that will spur sustainable economic growth, create jobs, deliver health and environmental benefits for EU citizens, and contribute to the long-term global competitiveness of the EU economy,” says the statement, which is still subject to change before it is adopted by EU leaders.

It also acknowledges “the right of the member states to decide on their energy mix and to choose the most appropriate technologies” – again wording aimed at Poland, the Czech Republic and other Eastern member states which have asked the EU not to interfere with their plans to develop nuclear power and natural gas to replace their ageing coal-fired power plants.

Officials who briefed the press before the summit said an agreement on the 2030 target was the first step to get further analysis on the economic impact of upcoming legislative proposals.

“We need a target to be able to create a framework to reach this target,” one official explained, adding that intensive contacts have taken place with national delegations prior to the summit to clarify this.

“The question to have a national analysis of the impact is a justified one,” said Diederik Samson, the chief of staff of European Commission vice president Frans Timmermans.

“But first things first: we need to agree on an EU-wide target for 2030, obviously complemented with the commitment to share the effort to meet that target in a just way,” Samson told a EURACTIV event last week, saying detailed cost-benefit analysis of upcoming proposals will follow at a later stage.