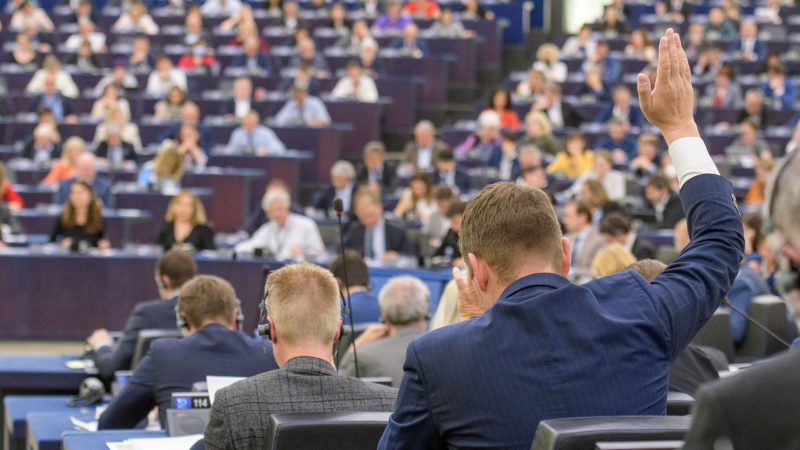 History tells us that when it comes to pushing for EU treaty reform, the European Parliament is almost always leading the way. [European Union 2022 - Source : EP]

Lawmakers on the left and right wings of the Hemicycle traded accusations on Wednesday (8 June) as the European Parliament voted to reject a proposed reform of the EU carbon market, the Emissions Trading Scheme (ETS).

Parties on the far-right and the far-left, as well as the Greens and Social Democrats, formed an unlikely alliance on Wednesday by rejecting the proposed overhaul.

It was rejected by a clear majority, with 340 votes against and 265 in favour, with 34 abstentions.

Initially tabled in July last year, the reform of the EU’s carbon market will now be sent back to the European Parliament’s environment committee, which will attempt to forge a new compromise.

As a consequence, related votes to introduce an EU carbon border tax and climate social fund were postponed until further notice as both proposals are closely tied to the ETS reform.

One diplomat said this risks delaying negotiations with EU member countries to finalise the package, as capitals will “likely have to wait for the European Parliament to stop squabbling”.

Green and Socialist lawmakers rejected the proposal because of conservative groups’ amendments they said weakened it too much, while right-wing groups considered it too ambitious, especially in the light of inflationary pressures.

Lawmakers traded blows after the vote, accusing each other of delaying the EU’s climate plans.

“The Social Democrats and the Greens have failed to live up to their responsibility for climate protection,” said Peter Liese, a German MEP from the centre-right European People’s Party (EPP), who was the leading lawmaker on the ETS revision.

According to Liese, left-wing parties tried pushing the reform too far by calling for a 63% cut in emissions under the ETS, higher than the 61% initially tabled by the European Commission in its proposal last year.

“For the Greens and Social Democrats, this did simply not go far enough. They wanted a 67% reduction and a higher one-off reduction at the very time when we are challenged by the crisis in Russia and the need to become less dependent on Russian gas,” Liese said.

“I think it is really indecent, and I hope that we can correct the mistake.”

The Greens and the Social Democrats, for their part, accused Liese’s EPP of caving in to the fossil fuel industry by seeking to water down the proposal.

“The Conservatives (EPP) cannot do bad deals for the climate with the right-wing extremists and then trust that we will, in final vote, vote it through in the parliament,” said Jytte Guteland, a Swedish MEP from the Socialists and Democrats (S&D).

“Peter Liese has failed with his fossil alliance,” said Michael Bloss, a German MEP representing the Greens on the proposed ETS overhaul. “Conservatives, liberals and right-wingers were put [back] in their place,” he added in emailed comments.

“For the 1.5-degree climate target, this means a great deal of hope,” Bloss added, saying “negotiations must start all over again.”

Reacting on Twitter, Martin Hojsík, a Slovak MEP from the Parliament’s centrist Renew Europe group, appeared to give credit to the Greens, saying the EPP had lost the support of left-wing parties by siding with the nationalists and conservative parties in Parliament.

Pascal Canfin, the Parliament’s environment committee chair, agreed with the EPP that the war in Ukraine had pushed up energy prices, adding pressure on European businesses and consumers.

“And actually, both are true,” he said in comments immediately after the vote.

The French centrist MEP said he would do “whatever I can” to solve the issue and “find the best possible compromise” on the ETS reform.

“It’s an unexpected situation, but we are going to manage,” he said. “And I think I have to go because we are going to precisely start negotiating this compromise right now,” he added before leaving the room.

Later in the evening, Canfin announced that lawmakers would try reaching an agreement within two weeks. “We give ourselves 15 days to reach an agreement and vote this essential climate reform on 23 June,” he wrote on Twitter.

But initial signs of a compromise were not positive. “If you break it, you fix it,” said a senior EPP source. “We hope socialists come forward with a proposal to bring the file over the line.”

Delayed but not derailed

Carbon market analysts admitted they were taken by surprise by the vote but played down the consequences for the ETS reform, saying they still expected Parliament to strengthen the European Commission’s initial proposal.

“The vote against the whole report came very unexpected and shows how emotional even some very technical elements of the EU ETS recently have become,” said Florian Rothenberg, an analyst on EU power and carbon markets at ICIS, an independent commodity intelligence services firm.

A key bone of contention between Parliament’s political groups was when to eliminate free CO2 pollution permits for industries like steel, cement and chemicals, and replace them with the new carbon border tax.

While the European Commission proposed phasing out free allowances between 2026 and 2035, the Parliament’s environment committee voted for a 2030 end date. The EPP, for its part, supported a 2034 deadline while Renew and the S&D stood in between, with a 2032 end date.

Rothenberg said he now expected the EPP and Renew to “give way on the CBAM related phase-out of free allocations” in order to find a compromise between the Parliament’s political groups.

“This will delay the whole policy process but so far does not have a fundamental impact on the market as we still believe Parliament overall will vote to ramp up some of the ambition of the Commission proposal as the initial vote today indicated.”

According to Felix Schenuit, a researcher at the German Institute for International and Security Affairs, the Parliament comes out weakened from the vote and “will now have significantly less negotiating leverage in the upcoming trilogue negotiations” with EU member states to finalise the carbon market reform.

“This is not necessarily a good message for ambitious climate policy,” he said in comments posted on Twitter.