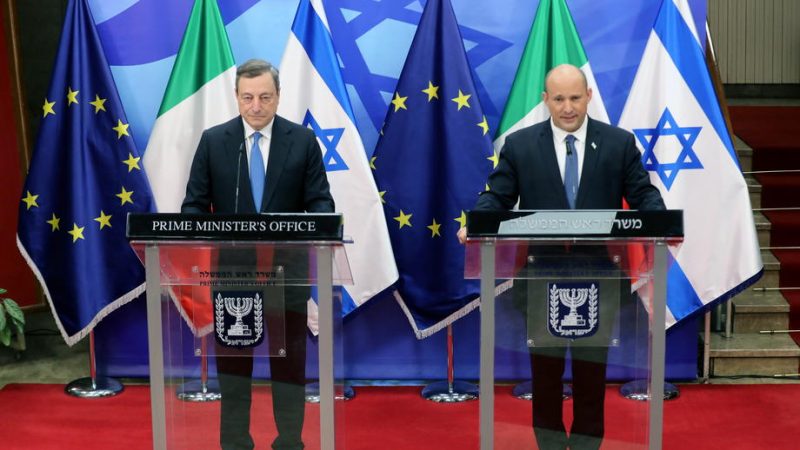 “On the energy front, we work together in the use of gas resources in the Eastern Mediterranean and the development of renewable energies,” Draghi told a press conference after the meeting with Bennett. [EPA-EFE/ABIR SULTAN]

Italian Prime Minister Mario Draghi is on a two-day visit to Israel and Palestine with European Commission President Ursula von der Leyen, where the two leaders discussed gas, wheat, and the war in Ukraine.

The need to find an alternative to Russian fossil fuel imports was mentioned by Draghi during talks with Israeli Prime Minister Naftali Bennett on Tuesday.

“On the energy front, we work together in the use of gas resources in the Eastern Mediterranean and the development of renewable energies,” Draghi told a press conference after the meeting with Bennett.

Since Russia invaded Ukraine, the Israeli government has tried to remain neutral between Moscow and Kyiv.

Draghi’s visit to the Middle East is linked to his visit to Algeria in April, which resulted in the signing of an agreement to increase gas imports by 9 billion cubic metres.

In Israel, the target is the Leviathan, an offshore gas field 130 kilometres from Haifa, in the exclusive economic zone of Zhor, on the border with Egypt, discovered by Italian energy giant Eni. The estimated reserves in the area are about 600 billion cubic metres of gas.

“We want to reduce our dependence on Russian gas and accelerate the energy transition towards the climate goals we have set ourselves,” Draghi added.

Draghi’s mission to Israel is also expected to unfreeze the EastMed-Poseidon gas pipeline project. The link, expected to connect Israel with Cyprus, Greece and Italy, will have an outlet in Otranto, southeastern Italy. This route would be able to direct new supplies of natural gas to Italy, although it will take at least three years to complete.