By Oliver Wainwright | EURACTIV.com with The Guardian 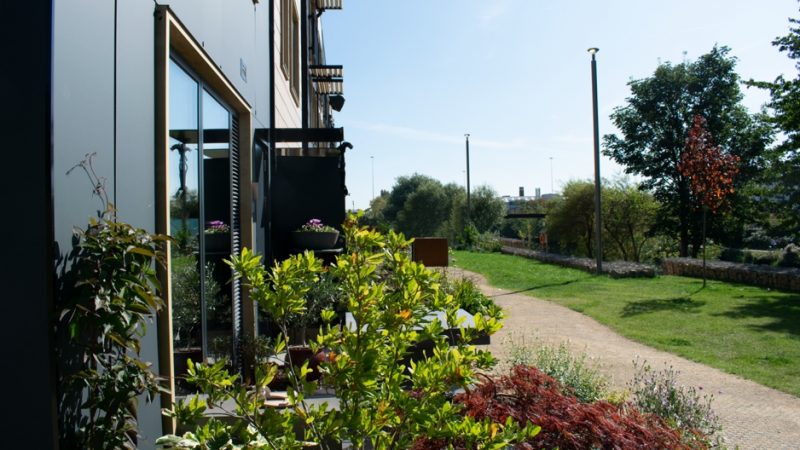 “The way we build housing in the UK hasn’t changed much since the Victorian era,” said Chris Thompson, the founder of Citu [Citu]

Smart, low-carbon homes were once the preserve of one-off grand designs – now there are up to 30,000 projects in the pipeline, writes EURACTIV’s media partner, The Guardian Environment.

Instead of parking spaces, it’s flowerbeds and vegetable planters that line the car-free street of Solar Avenue in Leeds, where rows of 60 low-energy homes form a little oasis along a bend in the River Aire, a short walk from the city centre.

Built in a factory across the road, these terrace houses are made from super-airtight timber panels stuffed full of wood-fibre insulation, with triple-glazed windows and solar panels on the roof, each erected in less than a week. Using up to 10 times less energy than a conventional house, their heating demand is so low that they create excess electricity that is fed into a community grid and used to charge shared electric cars. There will soon be 1,000 such homes here, along with a combined primary school and care home, as well as a timber office building with yoga decks and a tennis court on the roof, together forming the pioneering Climate Innovation District.

A few years ago these houses would have been experimental one-offs. But a green-design campaign group has calculated there are as many as 30,000 low-carbon homes in the pipeline, an impressive turnaround in which the industry is leading the way, ahead of government regulation.

“The way we build housing in the UK hasn’t changed much since the Victorian era,” says Chris Thompson, the founder of Citu, the developer behind the Leeds project, which plans to build 500 low-energy homes a year. “It’s all driven by perceived risk. Anyone looking to build something has to answer to a funder, who’ll use valuers to ensure that what you’re proposing has a market.”

Shifting the mindset of such a risk-averse industry can seem like an insurmountable challenge, not helped by the government dragging its heels on policy changes. But now, after scrapping Labour’s zero-carbon homes target in 2015, the Conservative government has finally developed a future homes standard, which will mandate all new homes to be “zero-carbon-ready” – although not until 2025 at the earliest.

So it has been the landlords with a long-term interest in the wellbeing of their tenants, and the longevity of their building stock, who are forging ahead with low-energy housing. Exeter city council, for example, has been quietly building zero-carbon homes for the last decade, with more than 200 council houses built so far to the exacting Passivhaus low-energy standard, and 1,000 more in the pipeline.

“We were originally driven by trying to address fuel poverty,” says Emma Osmundsen, director of the council’s housing company, Exeter City Living. “Not many people were talking about climate change in 2009, when we built our first three Passivhaus homes, so we became a kind of accidental pioneer.” The council is now on the seventh generation of its low-energy house design, which it has honed over the years to make it as “idiot-proof” as possible, says Osmundsen. Rather than timber frame, they use clay blocks that slot together like Lego bricks and contain a honeycomb of air pockets, negating the need for additional insulation. The homes are so thermally efficient that 60% of the tenants haven’t had to switch on their heating at all – some for more than 12 years.

Like many in the industry, she thinks the biggest barrier to wider adoption of low-energy standards is the lack of care and attention to detail on British building sites. “Passivhaus is really not complicated, and it doesn’t have to cost more than conventional construction,” she says. “It’s a bit like baking a cake: most of the ingredients are the same as a regular house, but you just have to follow the recipe in the right order. Perhaps it’s because the building industry is so male-dominated, but there is a general reluctance to follow the recipe.”

Many other councils are following Exeter’s lead. Norwich completed the country’s largest Passivhaus social housing scheme in 2019, winning the prestigious RIBA Stirling Prize in the process, while York is planning an even more ambitious scheme by the same architects, Mikhail Riches. Cardiff University built an “energy positive” solar house in 2015, using low-cost, off-the-peg materials, with features that have since been replicated in more than 1,400 affordable and low-carbon houses across Wales. Oxford has started work on its first zero-carbon council homes, while Enfield council’s huge £6bn Meridian Water development is also targeting net zero.

“It used to feel like we were ploughing a lone furrow,” says Jon Bootland, the chief executive of the Passivhaus Trust, which was established over a decade ago to promote the low-energy standard, but for years was seen as the preserve of one-off eco-homes in the countryside. “Now our approach is really in the mainstream, as one of the few proven routes to net zero.” The non-profit organisation, which trains designers and contractors and certifies buildings, has recorded a 60% increase in membership over the last year alone.

The environmental engineer Clara Bagenal George, the founder of the London Energy Transformation Initiative (Leti), has calculated that there are now about 30,000 homes at the masterplan stage that meet the Passivhaus target for a space heating demand of just 15 kWh/sq metre/year (compared with the current average of 54 kWh/sq metre/year), equating to a massive reduction in carbon. “It’s an amazing story,” she says. “The industry defined ‘good’, over and above the regulations, and within a year there are now tens of thousands of homes in the works that meet this standard. It shows we can do it.”

And even the volume housebuilders are starting to get onboard. “It’s almost paradigm shift territory,” says Simon Usher, divisional director of Persimmon Homes, one of the largest developers in the country, which infamously paid its former chief executive a £75m bonus in 2018, while its homes were found to be riddled with construction defects. In 2019 the company admitted it had lobbied the government to axe its zero-carbon policy, but, in an effort to clean up its image, with a new chief executive at the helm, it is now working on a prototype zero-carbon house of its own near its headquarters in York.

“It’s an unashamedly normal house,” says Usher. “We wanted to see how far we could get with our standard masonry construction, building with our usual concrete bricks and tiles, but adding more insulation, beefing up the windows a bit, and adding an air-source heat pump in the garden. In the end, we got to zero carbon, for about 15% additional cost.”

“People are willing to pay more for an electric car to do the right thing,” says Usher. “Will they be willing to do the same for a zero-carbon home? The market will decide.”