Since yesterday, the EU Parliament has been meeting in Strasbourg with minimal staffing. Today, the parliamentarians will decide on their position on the EU reconstruction plan. [EPA | Olivier Hoslet]

An association of ten major European environmental organisations launched an appeal to the European Union on Thursday (14 May) to come up with “the biggest green investment plan the world has ever seen”, shortly before the European Parliament was due to vote on its position on this issue. EURACTIV Germany reports.

The call comes before the EU Parliament resolution which specifies what demands the EU assembly is making on the Commission’s reconstruction plan. The plan will be presented next Wednesday (20 May) together with a new EU long-term budget.

“Our response to this crisis will determine whether or not we succeed in winning the battle against climate change, the loss of nature and widespread pollution,” write the signatories, including BirdLife Europe, WWF, the Climate Action Network, Greenpeace and Friends of the Earth, representing 100 other NGOs.

The EU should therefore launch “the biggest green investment plan the world has ever seen,” the NGOs write. 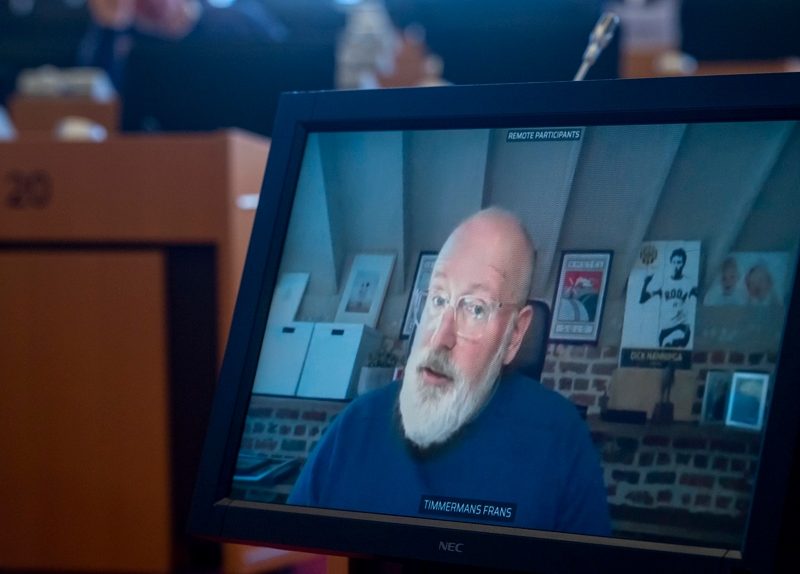 The European Union’s top climate official encouraged governments on Monday to attach green conditions to public support for coronavirus-hit companies, after the bloc’s executive opted not to do so at the EU level.

Environmental groups had already expressed their demands in two previous open letters to the Commission. They ask that all economic stimulus packages be strictly aligned with the Green Deal and the Paris climate goals.

Among other things, this includes investing hundreds of billions of euros in the renovation of houses, promoting renewable energies and sustainable transport, and restoring natural habitats. Fossil companies and industries, such as gas, oil and coal, chemicals, cars and airlines, should be blocked from receiving any EU funding, they say.

Furthermore, the upcoming EU budget for 2021-2027 should earmark 50% of its funds for environmental protection – up from 20% in the current budget, the NGOs write. And the European Investment Bank (EIB) should gear its credit lines towards the Green Deal and stop promoting fossil-fuel investment, they argue. The EU bank already decided in November to scrap financial support for fossil fuels from 2021.

The NGOs also refer to the planned EU taxonomy, a unified standard for green financial products that is to be introduced for large companies as of next year. State aid of any kind should be based on this framework and linked to strict conditions, which the EU should monitor, the green NGOs say.

The Netherlands had already expressed in April similar demands with reference to the EU taxonomy, which is yet to be decided.

Last week, the European Commission published updated rules on state aid, but left it up to national governments to decide whether to put green conditions or not. Only Austria and France are planning to link the rescue of airlines to green conditions. Germany has so far distanced itself from this.

The Green 10’s appeal is a response to many similar statements made in recent weeks. The ministers of 19 member states have also turned to the EU with a similar request and called, albeit rather vaguely, for a “green” reconstruction plan.

In today’s vote, the EU Parliament is formulating its expectations of the new EU budget. In the first debate on Wednesday, MEPs called for an economic stimulus package worth €2 trillion.

Commission President Ursula von der Leyen told the Parliament that they were prepared to take on more debt because it was “the least we could do” for the future of our children. She said she wanted to “tackle climate change and reduce the burden on the climate and not add to it.”