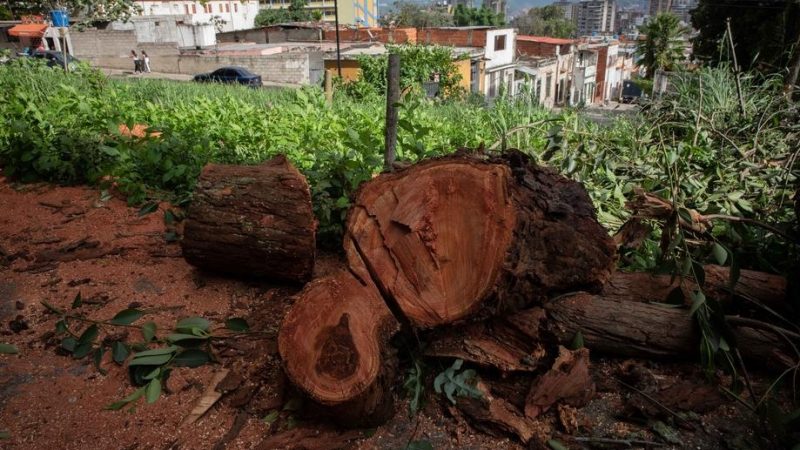 Around a third of the killings were linked to resource exploitation, like logging and mining [Rayner Pena / EPA-EFE]

The European Commission is considering sanctions to tackle environmental damage and human rights abuses in Europe’s supply chains, according to Nils Behrndt, acting deputy director-general at the executive’s justice department.

“We are looking into the question of the sanctions, the penalties, because obviously, if you don’t have effective enforcement, then you will not create the necessary pressure,” said Behrndt at an event organised by the NGO Global Witness.

It follows a report by Global Witness that found 2020 was the most dangerous year for environmental and human rights defenders, with 227 recorded deaths. Over half of the attacks took place in Colombia, Mexico and the Philippines.

Colombia saw the highest number of killings for the second year in a row while Mexico saw 30 documented killings, almost a third of which were linked to logging. Half of the attacks in Mexico were against Indigenous communities.

The real number is likely to be higher as deaths often go unrecorded. Many defenders also experience criminalisation, surveillance and sexual violence in attempts to silence them, according to Global Witness.

It is impossible to say how many of these can be traced back to European consumption, but  Europe has a role to play in monitoring its supply chains because of its large role in global trade, Chris Madden from Global Witness told EURACTIV.

According to the European Commission, many EU companies are sourcing supplies from entities based in countries with lower social, human rights or environmental standards and the identification of the risks related to this is weak.

“The legal framework lags behind the development of global value chains and corporate structures when it comes to the responsibility of a limited liability company for identifying and preventing harm in its group-wide operations and production channels,” the Commission adds.

By the end of this year, the EU executive is expected to table a proposal for binding due diligence legislation to ensure Europe’s supply chains are more sustainable.

“We want to oblige companies that are either located or operating in the European Union, that they have to comply with certain requirements on sustainability, that they are injecting sustainability criteria into their company’s strategy, and that also the company directors are taking certain obligations themselves,” said Behrndt.

It is yet to be seen how ambitious this proposal will be. A group of EU countries including France and the Netherlands already have due diligence laws in place, but it is expected that the Commission’s will be more ambitious.

“We’re expecting the EU to live up to the ambition it’s stated so far, that it wants to essentially have global value chains held to account across all sectors, going as far down the value chain as possible, which potentially means the whole value chain,” Richard Gardiner, senior campaigner on corporate accountability at Global Witness told EURACTIV.

It is essential that due diligence covers the whole supply chain or companies can still export environmental damage and human rights abuses to countries outside of the European Union with laxer rules while claiming ignorance, he warned.

He also highlighted the need for access to justice for environmental and human rights defenders, saying civil liability would be a gamechanger and push companies to be more responsible and more engaged with what is happening down their supply chain.

Speaking at the Global Witness event, a representative of Chhouk Village in Cambodia spoke about a foreign company that took their land with little compensation.

Their protests against this led to the death of a photographer and he told panellists that villagers now fear going out at night. He called on the EU and others to put pressure on companies to help communities like his.